It’s of great interest and intrigue to me to explore the depths of this deal, so for right now, the blog has been almost exclusively about this potato diet deal, or “hack” as I prefer calling it: because I don’t consider it a long term deal; probably a month or two.

A few days back I did some hash browns using a sandwich griller (a George Foreman would work too). Pretty easy, but here’s another method that in terms of getting crispiness is really quick. 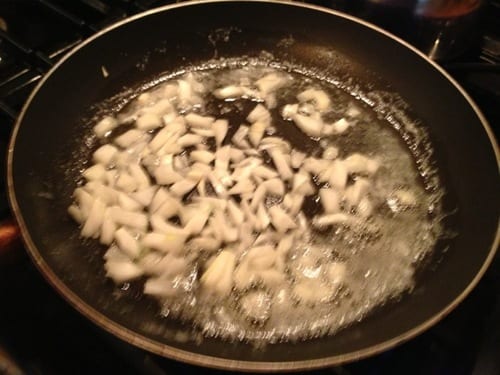 Once the potatoes are grated, put them all on a plate and into the nuker. Nuke on high until the steam coming off them begins to diminish. This took about 10 minutes for 3 grated potatoes. For those who’ve done hash browns the traditional way, you know how long it can take to get the high water content out. Here, it’s all automatic.

While that’s going on, sauté the onion in your butter. 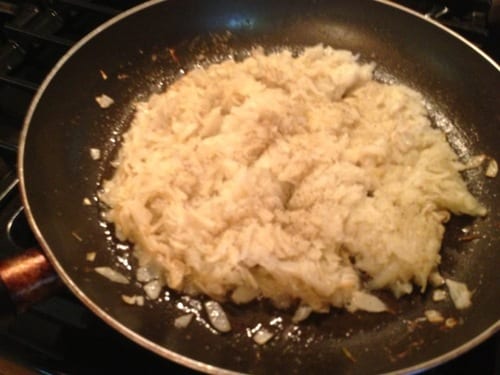 Lay the microwave potatoes on top of the onions and butter. Add some salt to the top (or, you can just wait and go with taste). I gave it a pretty liberal shaking and just a dusting of pepper. While I almost never use non-stick pans, I have one around just for such applications, especially when not cooking with a lot of fat, and the hash is already somewhat desiccated. This is a recipe for a huge stick to the pan problem. 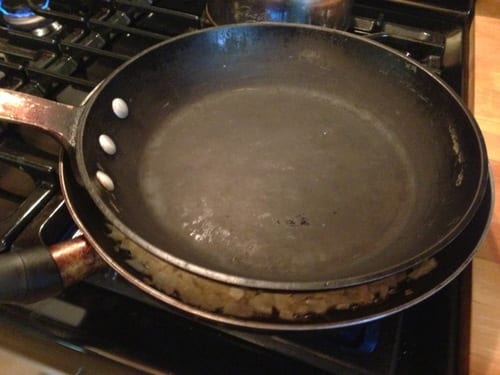 Separately, I had this other pan on the flame to get it hot, then I used it as a press and then let it sit there until time to flip. Just use a hot pad on top to get a good press on. 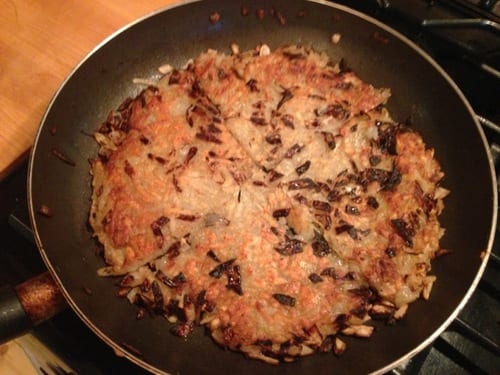 Slicing it into quarters made the flipping easy. I’m pretty good at just a pan flip of the whole deal, but didn’t want to risk a big break up on this first try. As you can see, the onions are nice & toasted while the potatoes, nice & brown.

Serve it with malt vinegar, which I dash on somewhere between skimpy and liberally. You can also salt to taste. It just sends it over the top for me. It’s like a plate of fish & chips, and you don’t even need to do the chips.

I ate about 2/3 of it (2 potatoes worth) and Beatrice ate the other third. We’re both stuffed. This was about 10:30 AM and neither of us had had a morsel since the mashed potatoes and fat-free gravy last night at 7 PM.

OK, now onto some musings and speculation. On that mashed potato post last night, Marie comments:

Once I could verify that there is a bit of latitude with the fat and protein so that it’s actually enjoyable for more than a few days, I feel I can recommend it to family members, since it’s also nutritionally sound…especially with the liver that you had pointed out at the start.

Of course, even without the little extra fat and protein, potatoes are nutritionally decent, at least for the short term – a ‘hack’ as you say.

I’m fascinated by the thermodynamic ‘dissonance’ (no way can lose approx. 0.6 lbs/day on avg. 550C deficit), so looking forward to Ray Cronise eventually being able to release his results.

I’ll have to stop when I’ve lost 8 lbs, I can’t really afford to lose more weight than that, but at that point I’d be fairly sure there isn’t just a 3-4lb ‘starter’ effect (even though on other diets that effect is usually water and, er, ‘bulk’, which shouldn’t apply here with ~2 lbs of potatoes).

So here’s some of my random musings & speculations.

Unfortunately I seem to have more questions than answers but this is highly intriguing and becoming more so by the day. Perhaps the biggest mystery to me beyond the greater than expected weight loss is having steady, high energy after a huge load of carbs like that (2.5 potatoes last evening), and then this morning, 2 whole potatoes worth of hash browns a hour or so ago and still running strong. In scientific terms, isolating variables is a great way to figure stuff out. What I’m doing here is isolating carbohydrate and in this case, a special kind of carbohydrate in that while it has the high glycemic index I see so many folks up in arms about, it has a low glycemic load, i.e., quite a different thing when accounting for actual portion sizes. See:

The Glycemic Index (GI) is a measure of the degree to which a carbohydrate is likely to raise your blood sugar (glucose) levels.  The scale is 0 to 100 (based on either white bread or glucose), with 0 being low and 100 being high.  The GI compares equal quantities of carbohydrates and provides a measure of carbohydrate quality but not quantity. So the drawback with GI ratings is that they are not based on commonly-consumed portion sizes of foods.

For example, only about 7% of a carrot is made up of are useable carbohydrates. But because a 50g carbohydrate content is employed as the standard measure for a GI rating of individual foods to show how fast blood sugar level are raised, a larger than normal food portion is used for the GI calculation.  In the case of carrots, for example, the amount is equivalent to 1.5 lbs – far more, of course, than people normally eat as a snack or part of a meal.

As a result, the GI rating often overstates relatively small carbohydrate content in a food item like a carrot.

The reverse is also true, i.e. the glycemic effects of foods containing a high percentage of carbs like bread, can often be understated under the GI system.

So, now that I know that for potatoes—at the least—I don’t get comatose, meaning: it’s not the carbohydrate in this form, even lots and lots of carbohydrate. That is called falsification and when something has been falsified, there is nothing more to see there (at least in my case, my wife’s, and anyone else experiencing the same). So, it’s either protein, fat, the combination (high carb along with high protein, fat, or both), overall meal size, or some complex combination of all the above. But it’s certainly not this kind of carbohydrate isolated as a near single variable (both fat & protein very low). Incidentally, I can eat meat only, a lot of it, and have the same zero problem, and same goes for very high fat, very low carb.