The French Fry Diet for Rapid Weight and Fat Loss

I’m betting that title gets some hit action

OK, for those popping in from wherever, you’ve been fooled—but only a tiny bit, as you’ll see. Sorry, but I’m a hit whore at base—and I do mean base. You see, french fries as you know them are almost uniformly awful, now. Back when they—including McDonald’s—used to deep fry them in beef tallow (rendered beef fat) they were not only the most awesome tasting fries ever, but the healthiest too. That’s because beef fat is a natural fat…duh.

But no, this relates to a bit of a weight / fat loss self experiment involving potatoes. See, some of us older folk have no problem getting most of the blubber off on an ad libitum paleo diet. It’s that last 15-25 pounds that’s a bitch and as I just blogged about, the so-called potato diet is really showing promise. So as with many things, I’m open to giving it a try. Here was the main post on the subject: The Latest Diet & Exercise Hacking Towards a Goal.

The key is to use something that fills and satiates you, that you have a hard time eating enough of to maintain body weight and is super low in fat, such that your lean tissue cells will be going to your fat cells to cash in regularly (they need fat). And, the amino acid profile is of sufficient quality to promote lean muscle retention in the face of a caloric deficit. See, all neat & tidy.

But the problem is palatability. Boiled potatoes with salt and maybe a dash of olive oil or smidgen of butter day in, day out? Nah. That post linked above is one solution, in the form of a soup. Yesterday I tried to go it the conventional way. I peeled and cubed a potato, tossed it in the nuker, then tossed it in some ketchup (0 fat) & salt. First, the wafting smell of vinegar was enough to kill my appetite right off. Second, just not very tasty, though I got it down and wasn’t hungry later.

So here’s another idea. As a general rule of thumb, fat is fat in terms of grams. So whether you drizzle a tsp per potato of olive oil, mash with a tsp of butter, or otherwise use a tsp of fat per medium sized potato, no difference.

Can you make french fries with only a tsp of fat per medium potato? Indeed, you can. 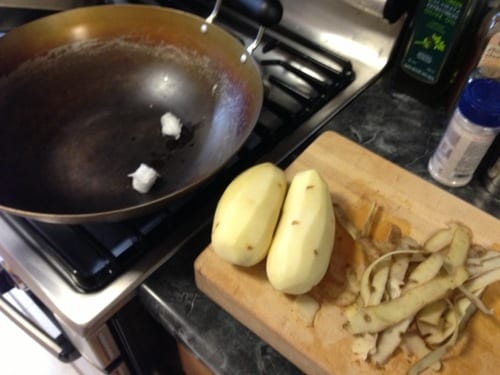 There you go. Two medium peeled potatoes. Two teaspoons of coconut oil in the wok. Now to slice them up and deep fry them…. 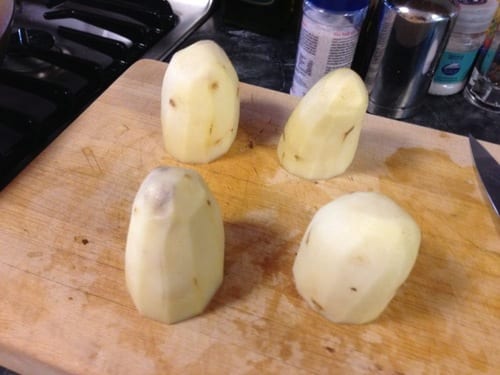 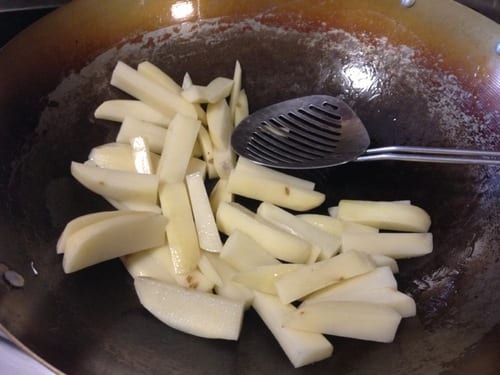 Put the wok on low heat to melt the coconut oil, then toss your steak fries. OK, no, you’re not going to deep fry them; you’re going to coat them in that oil while your oven gets up to 400F. Then you place them on a cookie sheet, spread them around evenly, and use a rubber spatula to get out all the fat that has coated the wok. You’re a fat miser, now. 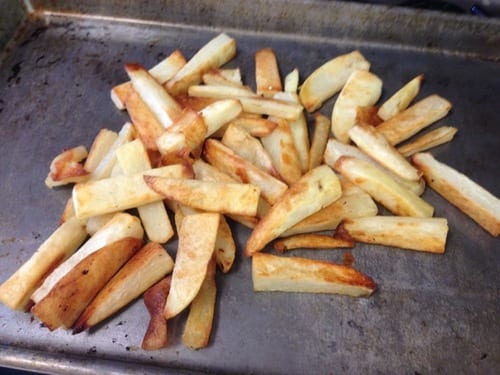 Let them rest on the cookie sheet out of the oven for 2-3 minutes, if you can resist. 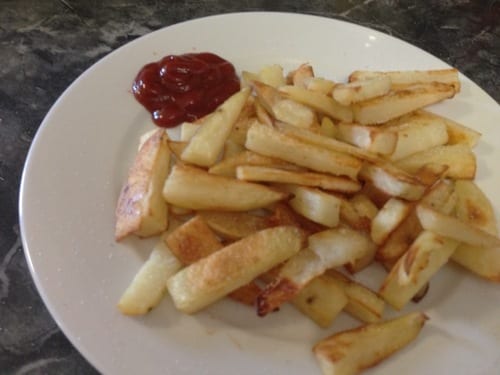 Some ketchup and a quite generous sprinkling of sea salt. I prefer eating some with the ketchup, some plain but scooping up loose salt on the plate. 2 1/2 hours ago, 350 calories of potato, 75 calories of fat, total 425 calories (perhaps 440 with the ketchup), first meal of the day at noon, and I’m still fine & dandy.

I want to reiterate: given the experimental protocol, this is not even cheating. Oh, BTW, they were wonderful. Hand over fist eating. Still, I doubt I could do this 3 times per day.