[Greetings and welcome boingboing folks. Perhaps some of you were around on New Year’s day 2010, when Mark Frauenfelder first linked to this blog about another experiment, showering without soap or shampoo. Thousands gave that a try with excellent results and many are still readers here today.]

Told you I’m a hit whore. …Besides, what if you don’t like French Fries?

Alright, the astute know I’m giggling here, right? I feel good, I’m motivated, have effortlessly lost 5 pounds in the last 3.5 days, no hunger, no excess glucose crashes (while potatoes are high glycemic index, they are also low glycemic load, meaning they bathe you with glucose over time, so no comas—at least not in my case).

Anything worth doing is worth doing right and I’m an all-in kinda guy anyway. I gave this experiment due consideration, and not only on effectiveness, but knowing I would get flak if I promoted it. Since I’m also all about flak, it was an easy decision.

Let’s review. You can first review or read my two previous posts:

Now the first post was a serious effort to explain why. The second, as is this, for the pure purpose of enticement. No doubt. Yep, I’m enticing anyone who needs it to shed pounds very rapidly with “sinful food.” Yea, I suppose you could eat Cinnabon to the tune of 1,000 calories per day and lose weight. But are you getting nutrition? Does it satiate? Does it have amino acids in a quality profile to keep you from wasting lean muscle mass? No. No. And no. Not even close.

This is the “magic” of potatoes. You can literally live off them, and some people have and do. Of course, you don’t want to, nor do I, but it’s a useful tool when you understand what’s going on, which is one hell of a lot of things as I’m learning. Let me give you the very basics, though, for review.

Yes, as I said, 5 pounds in 3.5 days. It’s 1:43pm and I’m still not hungry and have had nothing since the plate I ate last night, recipe to follow. So let’s get to the hash browns, just in case you get tired of french fries.

This was courtesy of “tatertot” in comments on that fries post yesterday. Feel free to post you potato palatability recipes in comments and if they’re decent, I’ll give them a shot and if I want to have them again, I’ll blog them.

Shred some potatoes, put a big handful in your non-stick waffle maker (the one you hid away when you went paleo), cook for 8-10 minutes or so.

Perfect hashbrowns made with zero fat!

Cover with salt and vinegar.

Well, I’ve never owned a waffle iron (I’m a French toast kinda guy when that urge arises). On the other hand, I do have a nice Cuisinart sandwich grill. George Forman can help you out too, but ask nicely.

Peel and shred your potatoes. I did a quick rinse in water in a colander. ONE teaspoon of fat per potato. I used bacon drippings, 3 tsp for 3 medium potatoes. Melt the fat in a pan & toss to coat the shred. I use a wok which is ideal to the purpose.

Lay it out flat on whatever you’re cooking with. Essential that it heats from both bottom and top at the same time. I seasoned with salt & pepper a bit. 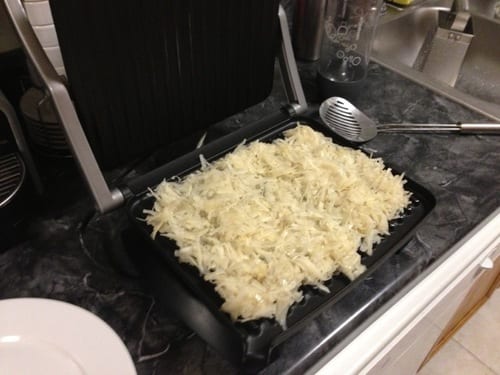 I don’t use time to cook something like this. Instead, I have the thing on high and most have a red/green light system to indicate whether they are providing power to the heating elements (red) or in rest (green). Because of the high moisture content, this stayed in red for at least 10 minutes, steam wafting up non stop.

Watch the steam. When it begins to be just a whiff, lift up the top and you ought to get separation from the top element, no sticking. Turn the thing to medium and wait for the steam to diminish a bit more. 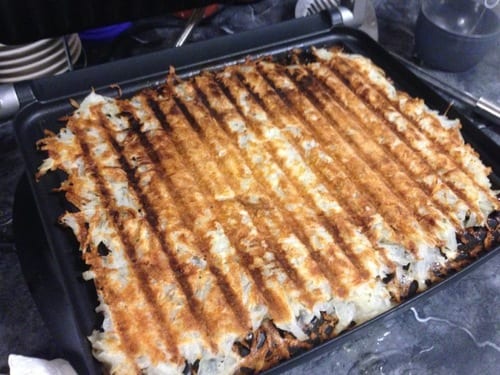 Since Beatrice had already fended for herself, I gave her but maybe 1/3 potato worth, which she later complained about. The rest went to me, with plenty of sea salt sprinkled on top. 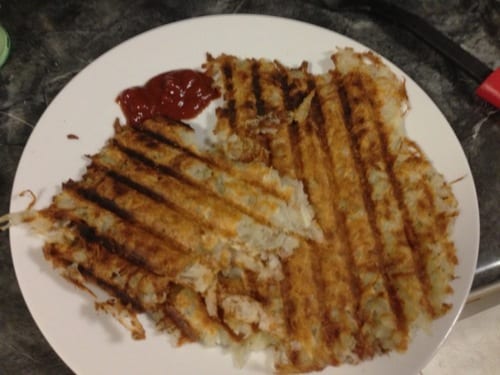 I ate it all with my fingers.

Let me address your sinful nature. You recoil at this, right? This can’t be right! I reiterate. It’s just a different cooking method on the same formula: no more than 1 tsp of fat per potato. Spices: 0 fat; ketchup:0 fat; salsa:0 fat; marinara: 0 fat. …Or whatever the hell you want that will not change the plan.