The Latest Diet & Exercise Hacking Towards a Goal

Back nearly a month ago when I did my second Got Milk? post I laid out a plan to consume a lot of milk, do my weekly Body by Science inspired workouts, cut calories to about 2,000 per day, etc.

It didn’t work out that way. What happened was that the improvement in body composition and gains in the gym were so rapid (and injury free) that I quickly decided to feed the hunger and see what would happen. So I drank lots of milk and ate whenever hungry, no restrictions. As of mid-last week, 12 pounds is what happened, all without any of it added to my waist. I was 187.5 when this started and I ended up at 199.5 in the space of about three weeks. Strength, shoulders, arms, chest, back and thighs feel like me again—with the exception of persistent weakness in my right arm/bicep from the injury—after over a year and a half hardly in the gym at all. I feel as I have regained the lean mass I had in these photos.

The fact is, I hadn’t been checking the scale at all, at least for 2 weeks. I noticed I was not feeling as hungry anymore and food and milk consumption just started dropping off. I checked the scale and was shocked to see that 199.5. Still just going with my hunger, and desire for milk, 3.5 pounds have come off in 5 days or so (no doubt water accounts for a lot of that). Now at 196.

So I’m at a point of what to do now and have spent some time considering it. Here’s the basics of the experiment, critiques and suggestions welcome.

In terms of the deadlifts, I think I’ll push those out to once every two weeks. In three workouts over three weeks I’d gone from 3 sets, 5 reps each at 205# to 3 sets, 5 reps each at #255. Then yesterday, 8 days out, I tried to do the same thing. Immediately, it felt heavy. Got my fist 5 reps in. Second set, that first rep and I was…NOPE. Done. Dropped it to #235 for the third set and got 5. So, perhaps a bit much too fast. Looks like it’s going to take quite a while to get back up to #325, and that’s fine.

[Update: Well, I figured out what happened. Because the gym has a new DL specific deck and DL specific weights (45, 35, 25, 10) that are all the same diameter and wider than the standard ones, I effed up calculating the load. I was actually at 295 on that first set, not 255. Alas, no surprise that it felt so damn heavy and I could only pull one rep for the second set. Then, the third set was actually 275, not 235.]

The big hack here, of course, is the potato diet. It’s been all over. I’ve even seen Peter blog about Chris Voight’s experiment with potatoes and weight loss. There’s apparently a big forum thread at MDA about it, and also comment threads on Ray Cronise’s blog.

I don’t want to steal any of Ray’s thunder and I know he’s looking into and experimenting with this in a very thorough way. So, here’s just what I get as a gist of the whole deal, not having yet read anything but Peter’s post.

In essence, it seems as though if you eat only potatoes you will have a very difficult time eating enough to maintain body weight—so long as they aren’t dressed up with a lot of stuff like butter, sour cream, bacon…or deep fried. Apparently, people have been reporting weight loss of 1/2-1 pound per day on these diets without hunger. There might be a gut flora element to the deal as well.

OK, but how about if you could make them a bit more palatable with only a smal addition of other calories, but still achieve a similar result? This is what I aim to find out. Just a few hours ago I made a pot of potato soup, an off the cuff recipe creation. 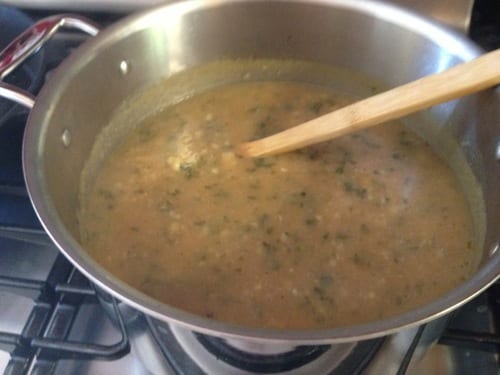 Place all ingredients in a pot, bring it to a boil, cover and simmer on low for 30 minutes. Turn off the heat. Use a potato masher to mash it all up until a desired consistency is reached. Serve. 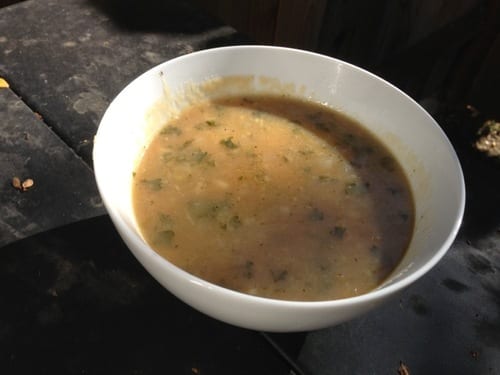 It was surprisingly good, but very, very filling. That bowl above is 5 ladles, I had it 2 hours ago and I still feel stuffed. So, basically, that entire pot of soup comes out to about 1,660 calories. Do the math. Do you think you could eat the whole thing in an entire 24-hour period? I have my doubts, at least consistently.

There’s also variations you can do. All beef stock, all chicken stock, different proportions, vegetable stock, mushroom stock, etc. Also, you could switch out the butter for a few slices of bacon. You could use leeks instead of onion, add some garlic, or use some other vegetables altogether. Other herbs & spices. But based on that one meal I’m guessing these small steps toward better palatability might actually help you to eat enough! Because, if you don’t eat enough for long enough, you know exactly what’s going to happen.

OK, one more thing. I added in the Uni-Liver supplement to the log in order to see the overall macro breakdown and micronutrient profile.

Probably fat is a little overstated because the 1.8 ounces of braised beef liver I use as a surrogate for 10 caps of Uni-Liver includes the fat and Uni-Liver does not.

That is pretty damn impressive for an 1,800 calorie day. Damn liver is amazing. Also, note that I supplement D, Magnesium, Selenium and Zinc, so with that 1,800 calorie pot of soup and my few supplements the only thing going missing is E and calcium.

Here’s what it looks like with the 100 calories of liver removed.

Alright, to sum it up, a pretty simple plan to cut calories 5 days per week using something very satiating (potatoes), yet not so bland so as to chronically under eat and end up going off plan altogether. One day of complete calories restriction. A sane workout plan that not only maintains but provides for gains. A targeted approach to proteins via the quality profiles of potatoes, liver, and branch-chain amino acids yet overall very moderate in total protein.