A Modest Proposal to Protect School Children from Gun-Wielding Predators

If I was even more cynical than I am, more susceptible to conspiracy theories, what would be better than this?

In 1990, the Oligarchy that runs everything worldwide behind closed doors, and with their super-human ability to keep secrets too big to keep for centuries, got together for a brilliant plan. See, they’re smart—they run everything without us even knowing so they must be—which means they know there will always be a predator / evil element.

How to benefit from that predatory element, beyond the obvious protection racket we’ve already been running for centuries, exchanging public perception of being safe for less actual safety and with our middle-man cut of more power and influence in the bargain? How about we make the most defenseless members of society—and most sympathetic—the principle targets and victims? Our power will skyrocket!

Gun Free Zones! Schools! Brilliant idea! We’ll implicitly advertise to the predatory element just where they can go to meet the least amount of resistance. They’re smart. They’ll get it. …Not to mention, some of this element were misfits in the very public indoctrination we call schools; it will be a doubly obvious choice for them and a literal perfect storm of public outcry for us. Our influence will skyrocket!

…Just one thing. There’s a grave danger that the public will eventually catch on and realize that we’ve made the kids sitting ducks, so that we can grab more power, more influence…and eventually, be seen as so virtuous that our old rival The Church will just hang up its robes & beads for good. …What happens if, for instance, either someone who knows we’re just doing this so predators will go after the children instead of us or our stooges in government, or is the typical moron who thinks everything we do is good for them… What if they propose that we make The White House, Capitol Hill, and all the State Houses Gun Free Zones? 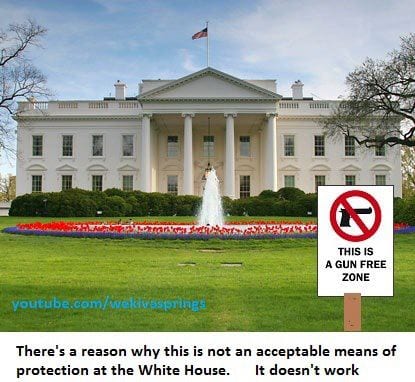 Seems like a good diversionary tactic to me. I await President Obama or any Congressman to introduce Federal Legislation to make all federal and state houses of government across the land Gun Free Zones. What’s good enough for the kids is good enough for us, and it goes without saying that we ought to lead by example when it comes to kids.