Yesterday afternoon—Sunday, while all the good football games were on—we had ourselves driven down to the border between California and Mexico by Bea’s favorite nephew. Actually, Beatrice has 10 favorite nephews, as well as 10 nephews. ….She treats each one of them as though they are the most important person to her in the world (the nieces, too). See, I do have a good side. I get to observe it every day: concretely rather than introspectively. I don’t have to take on the burden of living it directly.

That doesn’t mean it doesn’t mean tons to me. I get to see love and tenderness and caring up close every day, just enough to remind me, without having to bother myself too much over my root desire to raise black flags and slit throats. Beatrice tames me, which waxes & wanes over time. I’ve been in a tame mood recently, bored with myself in my worst moments. I’ll get my fill of tame someday, then lash out, and the cycle will renew.

…So there’s this kinda clever way to get through the border, to get to the airport. Not exactly wetback in reverse—we didn’t have to swim the Rio Grande—it’s on foot. Problem is, I had the rather circuitous directions in hand for the drop off, whilst confirming the route on my iPhone en route. So I was looking down, and FavNeph missed the 905 east and then last turnoff on the 805 south until you’re irrevocably in Mexico. Now, had it been my nephew, I’d have just said, “OK, take us to the Aeropuerto Internacional de Tijuana…tout de suite! You’ll find your way back.”

But this is Bea’s favorite nephew, you see. Five days of vacation in jeopardy mattered not a bit. “We’re not leaving him stranded in Mexico!” He did do a good job explaining the situation to all the gun wielding border guards; that we were here unintended, and didn’t really want to be in Mexico (he’s full Hispanic too, but doesn’t habla Espanol). Uncharacteristically, seeing we still had slack in time, I just let events play out around me, in silence. After 15 minutes or so, as Bea and FavNeph had been talking with various gun wielding border guards about how we undo the undoable, I made a modest suggestion. How about, since we’re already in Mexico, we go back to the US via the mechanism long set up for such endeavors? Borders are one-way affairs, and you can’t back up on a one-way street.

Thankfully, the intervening time had let that reality sink in for everyone, and we were off. 15 minutes later, we were back in the Land of the Free, where more people are in prison per capita than in China…or…Mexico! God Bless America! Wave that Flag and Be Proud! …But I digress.

…So we did the circuitous route to the other border to the east, off the 905, walked across, caught a cab and were soon at the airport with zero traffic and Tijuana issues. We boarded an almost new Airbus 220 on Volaris and were soon in San Jose del Cabo. And that’s where we were set up to stay. Quiet and tranquil.

Then, this morning, I had some business down the road in Cabo San Lucas. 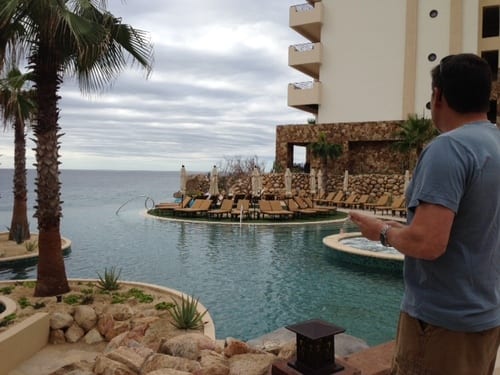 That ended up being an all day-affair; but prediction and enthusiasm wise, very fruitful. It will be about three months before I can talk about it.

…We’re off tomorrow morning, up the west side of the Baja peninsula for La Paz. Three days of tranquility in the B & B of Richard, an expat with his local wife, who comes highly recommended by Bea’s sis & bro-I-L—and who spent every second of time on the phone Beatrice demands before booking the place.

Word is, swimming with whale sharks is the hot item right now.

We have some inside knowledge about an impossible to find beach along the way—that’s commonly referred to as Paradise-No-Bullshit (I just made that up)—and after that, we’re going to “check out” The Hotel California in Todos los Santos, fully intending to “never leave” when it’s time.