Don’t Worry: When Seconds Count, the Cops Are Only Minutes Away

…And what do you want to bet that when it’s all said and done with the Connecticut School Shooting, just as in the VaTech shooting and others, the pigs end up being superfluous because the gunman himself did their job?

In other words, the pigs are entirely irrelevant; there, merely to stand in front of cameras pretending relevance by stern-and-solemn-face, waxing on about the “importance” of their “ongoing investigation.”

Pigs, when they’re not harassing you in the high risk job of issuing traffic citations—because that’s actually safe—are mere janitors in nearly all situations where it’s not safe.

And now, elementary school children—5-10 sweet years old—are caught in a crossfire, where Democrats and their sheltered urban commie friends are afraid of guns because they don’t understand them…just like rural Republicans are afraid of gays for the same reason. Everyone is disarmed and defenseless because everyone’s afraid—like a pool of slime seeking the lowest and darkest places. …And the only ones not afraid are the predators; not afraid of guns, or, the consequences of their predatory use.

The pigs are nowhere to be seen at the exact time it’s most crucial and, in the fantasy world of USMA—United States of Moron America—it’s actually what they believe they’re getting—courageous protection—in spite of nearly all evidence going to the contrary. In terms of the pigs: virtually everyone else in any real situation is as defenseless as a cockroach at a tap-dance festival. The pigs almost always utterly fail in the situations that make up the only rational justification for having them.

It’s not remotely crazy to finally ask the question: would we be far better off with zero pigs, 100% of the time, 100% of everywhere? I think the answer is an obvious yes. Where they’re not more corrupt than Vito Corleone running a civic Bingo parlor, they’re a big drain on society, a fucking eyesore, and a general pain in the ass.

…I live in a country of so many abject morons, well better than 50%, and counting—tipping point time, given the vote. You wait and see. Those morons—and so many of the Europeans, where it’s been fashionable to be a disarmed, defenseless pussy for decades—will call for further disarming and pussification of the already defenseless.

In the meantime, while by no means a gun nut, I do take my own responsibility seriously—because the pigs are a bunch of fucking jody-boy wankers who I wouldn’t trust to fetch my mail. 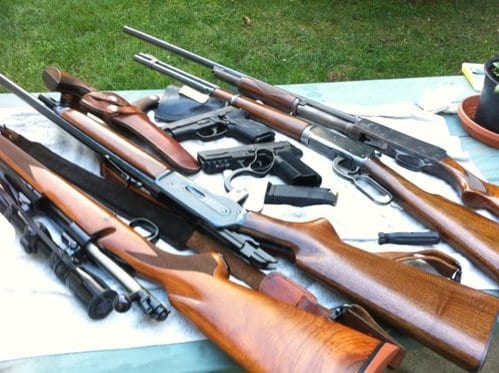 Three of those belong to my neighbor, with whom I always got along fine before they moved. It’s actually quite nice to know your neighbor is well armed and competent with their use. That’s how I grew up. Sure glad it wasn’t around a buch of hand-wringing pussy boys, or worse, Euros guys—most of whom would sooner hold a stiff guy’s cock than fire a real gun.

Get a gun. Learn how to use it and go have fun sometimes. One handed practice:

It’s pretty elementary. Let every school teacher who’s willing, take requisite training and continuing qualification, and carry right out there in front of everyone.

It’ll probably have the more important long-run unintended consequence of solving a lot of other fucked up shit in public schools.

Now go fuck off, America, Land of the Increasingly Fearful Pussies. And Western Europe? Just sit down and shut up. You’re dismissed; disqualified.

Calling 911 ought to be your backup plan.

Update: Here’s what I wrote about the Jody Boys in 2007, VaTech.

I don’t know about you, but I have nothing but a deep and profound loathing for that whole cop-scene looping continuously on the news surrounding the Virginia Tech mass murder. I hadn’t a chance to watch any TV while things were unfolding yesterday, but I flipped around the dial last evening and was just appalled by the display. Don’t know I could put it any better than Billy:

…where all the video shows us these slug-ass cops running to & fro with all their fine army-man wannabe costuming.

You got that, Blacksburg Police Department, County Sheriff, SWAT, BATF, and all the rest of you dipshits who got all dressed up so’s you could parade your worthless carcasses around the TEEVEE all day looking all toughass?

You’re putrid and disgusting. Every one of you.

Actually, you’re worse than worthless. I could be grudgingly satisfied — or at least resigned — with worthless. But what you guys do is actively perpetuate the fraud — you get that: fraud — that honest and peaceful people are safe around you — that you’ll protect them; when in point of observable fact, you’re either preening your costumed candy asses in front of the TEEVEE completely out of harm’s way, or else you’re busting down the doors of unarmed and peaceful people where you know you’re not going to face any serious armed opposition.

Anyone with any sense at all sees completely through this charade. You know what? Here’s how worthless you are; you, with your dozens upon dozens of “highly trained officers,” G.I. Joe dress-up, assault vehicles, and dogs sniffing who knows what: a 100-lb freshman girl with a decent weapon in her backpack and a bit of nerve would have easily put you all to shame.