Too hilarious to not just quote the whole thing outright. Just for some lafs. Thanks for sharing, Jesrad. Memo to the Onion: you’d better watch out. This is pretty damn good.

ANGRY Friday night vegetarians ran amok in a branch of McDonalds when it failed to offer adequate meat-free and vegan menu choices. 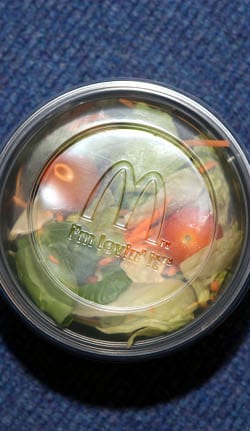 ‘Spanish tomatoes can fuck off’

Police were called to the Wigan restaurant after an intoxicated health-conscious mob began smashing furniture and exposing their genitals.

Onlooker Nikki Hollis said: “The atmosphere was raucous but good, until they ran out of those little bags of carrot sticks.

“Things turned ugly then. There was only one bag of apple pieces left, and two thickset men, one with sick on his shirt, started fighting over it.

“The bag split and the slices of fresh apple went on the floor. Everyone went mental, throwing punches and kicking, trying to get to the fruit.”

She added: “They were chanting something like, ‘veggie boys, we are here, shag your women, eat your vegetables’.”

“This prick behind the counter, he’s like ‘we’ve got salads left’. I was like fuck off mate, they’re deceptively high in salt and fat, plus most of them come with grilled chicken and I don’t eat meat unless it’s locally sourced.

Logan’s vegan friend Nathan Muir said: “When you’re a vegan and you’ve skulled 18 pints of Stella, you want something fucking wholesome, like a five-bean salad from a fucking Soil Association-approved grower.

“And if you don’t get that, it’s going to fucking kick off.”