“If the drug war were a business, it would be bankrupt.” – Richard Branson
Laf: 100% of Senate Democrats Vote Against Farmers and For the FDA

Lots of posts, lots of comments, lots of speculation and musings in both.

Someone asked somewhere in comments about Paleo adversity to this whole idea. I’ll state it plainly: I simply don’t follow it. I’d rather just put it out there, willing to be wrong, let myself and you decide over time.

Why not decide ourselves based on the myriad different factors and observations we all experience? What’s the risk? …That we learn something new? That we weren’t as sure about everything as we thought? That some we considered “enemies” were, after all, maybe right about a thing or two we were wrong about?

It’s rather amusing when you think about it. I was never overly concerned with the label “paleo Movement,” while others expressed reservations over the years. They said, in essence: “as soon as it’s a movement, then there’s dogma, and with dogma you get saints and demons.” In many respects they have been proved right, in spite of what I figured was a pretty good mindset against that very thing: the human evolutionary basis.

The one thing I have pretty much come to conclude is that by restricting an entire class of nutrients—carbohydrate—the low carb movement is probably weighing paleo down. As for example, protein is now suspect because when starving for glucose, your metabolism makes it from protein.

So even some of the top honest guys out there appear to be willing to take a look, let their readers decide. There was the “Link Love” on MDA the other day I already mentioned and then yesterday, this Tweet by Robb Wolf:

Or, to put the whole thing in an entirely different perspective: if paleo is essentially about Real Foods our ancestors sourced to thrive on and migrate all over the globe, how in the world have starchy vegetables and tubers gotten a bad rap?

With that in mind, some quick & easy ideas. 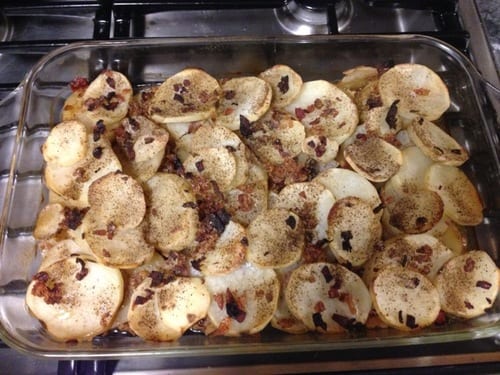 That’s the same as this dish, but using a bit of shredded roast beef and bacon bits. 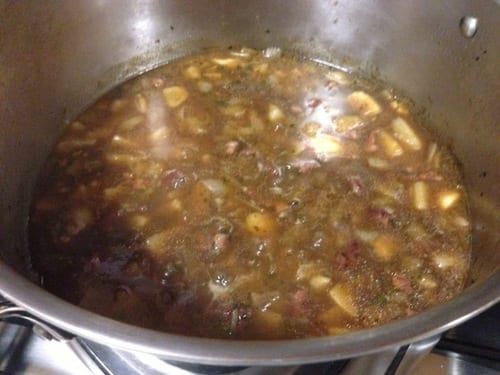 Another soup. But wait for the punchline. This was a lot of potato, like 5 large baking taters, half an onion, 4-5 cloves of garlic (put them in peeled, whole), and half of a frank-sized elk Kielbasa. Just enough beef stock to cover and then simmer until it’s way reduced. Mash up and then…. 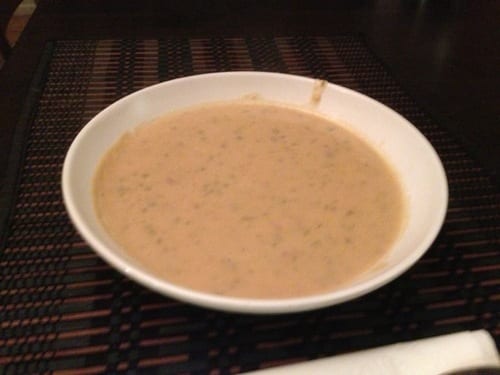 Only about a cup of whole milk made it nice & creamy. That’s not a lot. That was dinner for two, then leftover lunch for two, and then another leftover dinner.

Here’s what I did there. 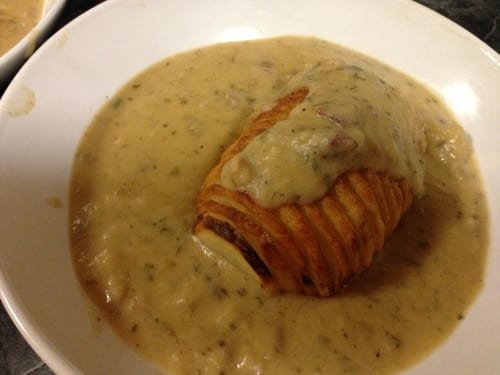 That was one of those sliced & baked potatoes, with leftover potato soup on it. Silly, huh?

I hope you’re getting the idea here. Results are still as to be expected for me, but with just very modest added animal protein & fat. A win. 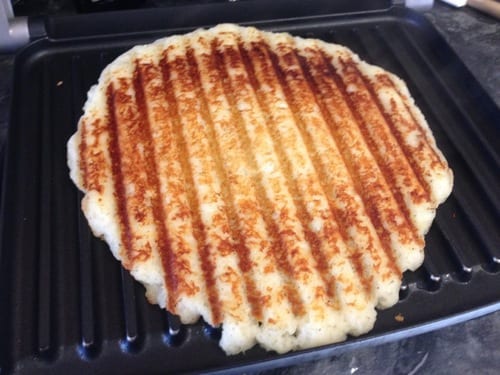 You recall I repurposed my panini maker to do hash browns, right? Well, I had some leftover very low fat mashed potatoes from the other night and found another way to heat them up. I used no fat on the cooking surface. A George Forman Grill ought to work just as well, or even a waffle iron or one of those clamshell grilled cheese sandwich makers.

Tip: to remove it, gently lift the right or left side with a spatula and then roll it off, parallel to the grooviness. Unroll it onto your plate. 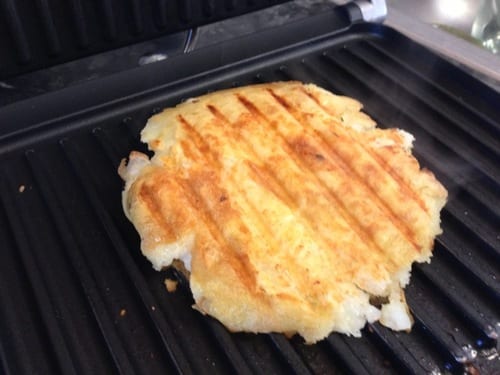 And finally, people have been talking about baking up a bunch of potatoes (400 for an hour is my preferred method), tossing ’em in the fridge and then eating them cold with salt & malt vinegar. This is a zero added fat way to do it. And it’s great.

In this case, I peeled the skin off, rubbed but a bit of butter all over it, then just smashed it with the cooker.

So there you go. More idea and methods than you can possibly handle.