Word is, a bunch of Mark’s Daily Apple Forum folks are giving this a shot. Good for them.

Anyone who admonishes you to not go a week or two eating mostly just potatoes on the basis of whatever contrived fears abound (mostly rooted in envy that you have an actual independent mind not driven by their fears) is just stupid and dismissible out of hand.

Whether this works or doesn’t, makes you feel good, bad, or indifferent…whether you love it or hate it…is all something only you can find out for yourself. I wasn’t afraid of giving it a try and I’m not only not afraid, but in full-on welcome for anyone’s personal assessment—good or bad, bring it right out here in the open. …But at least try it, in order to speak from some authority. We’re not very kind to idiots around here; itself a liability, now, because paleo is 80%+ moron and growing moron by the day.

<rant> I’m only interested in the true 10% of fuck-you Paleos. I figure those 10% are worth far more than quadruple the 80% of paleo fucktards. BTW, paleo fucktards? That’s  the lion’s share of all the newbies over the last few years. Prior to that, we had evolutionary, in-your-face-critical thinkers with thick skin. Now paleo is totally pussy and it’s totally cool to be a fucking little pussy boy. I swear: the next little teenage girl who happens to sport a male appendage but who instead acts like a fucking little pussy victim girl—with sensitivity and feelings—on some thread here or there? I’m gonna lose it. Jesus how I fucking hate them with a passion that transcends even the rant I’m able to bring here. Or here: Paleo Pussies (blast form 2009 when there weren’t a fraction of as many).

Go away, pussies. Go away! Most of you. You are not worthy of runny shit. You disgust me. Most of you. And I do know you’re reading. You little shits-for-brains know who you are; you know who I’m talkinig about. </rant>

Alright, the few fearless who remain—because I love to help the real paleo minded, non fear-motivated whenever I can, and screw the rest to death—let’s cover another dish and I’m doing just this one, because I’ve just come to believe this may be all you need because it’s that good. Commenter Amy is the star.

My favorite way to do potatoes is so simple but always gets raves: peel a few potatoes. Slice them width-wise about 1/2 to 2/3 of the way through a few times, so you get a “fan effect” from the slices. Place in a baking dish. Melt a tsp or two of butter per potato in 2 cups of beef or chicken stock, season potatoes with S&P. Pour stock over potatoes and bake at 400F for an hour, basting potatoes frequently.

The stock will reduce into a thick sauce and the potatoes are tender inside, crispy out. Leftover are great with an egg the next day.

I S&Pd after pouring the stock over, and I never, ever baste. I only did two largish potatoes and she said several. The stock was a bit much, but no matter. I just set aside the goodies in the oven that I’d turned off, and reduced the sauce on the stove a bit. I also have wild kill elk in the form of kielbasa (uncooked, uncured). I used one normal frank-sized sausage sliced the same way as the potatoes (for two people). As such, I didn’t do the butter because this has some fat (remember: tiny fat & protein, that’s the key). Tuned out great but I got no pictures. Beatrice devoured hers. I liked it so much I did it again for brunch, and this time I got photos. 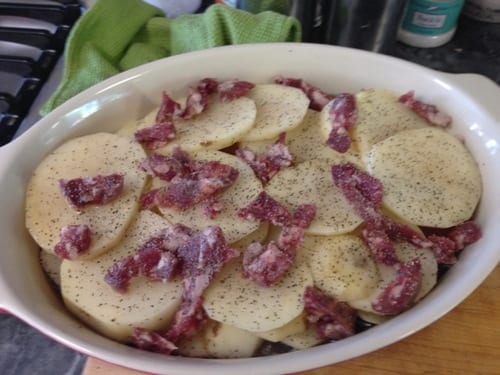 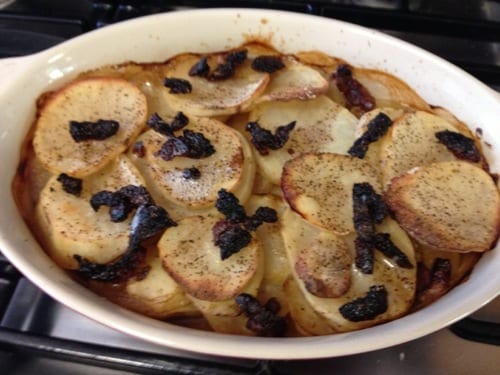 Those bits (1/4 of the frank) of elk look crispy but actually, they’re more desiccated, and once they got mixed in they took on the most amazing, delicious, gummy bear chewiness ever. And so do the potatoes on top as contrast to the more paste like ones at bottom. Delishiouuuuus!

So basically, that’s two largish potatoes peeled and sliced. I did melt 2 tsp of butter in the bottom and in exchange used only a quarter of the elk kielbasa instead of half (for one person). Lay in the potatoes, then I just added stock directly until about half up the side. Then the meat & S&P. 400F for about 70 minutes.

It was perhaps the best of the potato dishes yet. I just ate it as I was writing this. I could easily do this every day. Imagine the variations with some onion. Bacon instead of my elk. Pork Sausage? Anything, just remember: token fat, token protein. Incidentally, Kitchen Basics stock is zero fat and has 5g protein per cup. The unsalted chicken and beef is really the ideal palatability companion to this potato deal (as others have tried on my recommendation and concurred).

All right all you non-pussies, go give that a shot.