Ever just need to rearrange furniture every now and then and basically clean up; toss stuff, renew life? That’s what Bea & I did, yesterday, and I so love it. 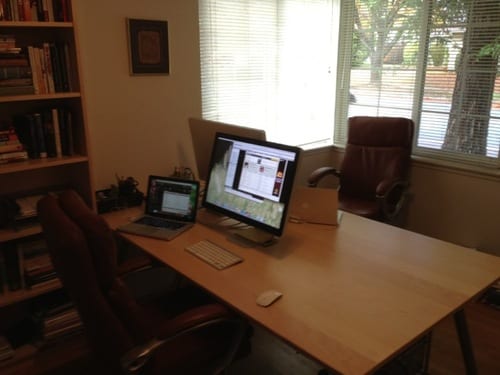 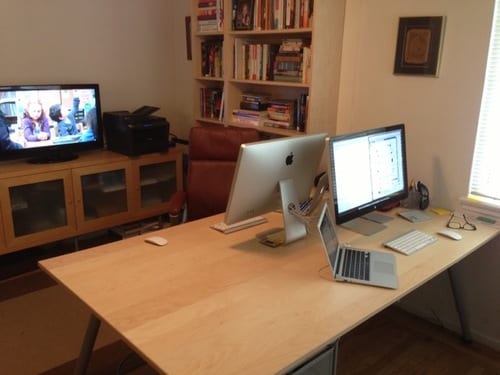 My spot is the one by the window. I can never manage to be comfortable with my back or side to the doorway.

The desk is still free of extraneous debris.

Update: BTW, here was the standup desk I put in when we lived in the lofts. I still have that and am considering a reinstall. I have a standup out on the patio but I really like working with my 27″ LED display.

Back in the summer of 2009 I had lunch with Patrick Vlaskovits. …I’ve since joined him for a number of lunches & dinners here and there when he’s around, most recently with other folks—like Dave Asprey, Dr BG (twice), Brent Pottenger, etc.

But sometime after our initial meeting he pitched me a couple of ideas.

One was for PaleoHacks. I’m proud to have been the very first promoter of it, quickly helping it to attain some momentum which never stopped. Of course, it has long since had its own momentum, but I’ll never regret helping give it an initial push from thousands of readers…probably many long since gone from both this blog and PH.

At long last, that investment is beginning to pay off just as I would love it too, the most.

Update: Oh, I see the thread has been closed. Now that’s disappointing for an attention whore like me!

After a couple of days banging away on theory, time to once again revert to the practical. You know my ethic of the hack: make it highly palatable and rewarding, trust the potato to do its job.

So let’s get right to it. I’d already shown you the mashed potatoes and then the hash browns from the initial day of what began our week away for the holidays. Other than a sensible meal or two at a restaurant during those initial 3 days up at the cabin, I stuck with the potatoes exclusively. While I didn’t do pics, one thing I learned was that a nuked, chilled, then peeled and sliced potato with salt & malt vinegar is grand. 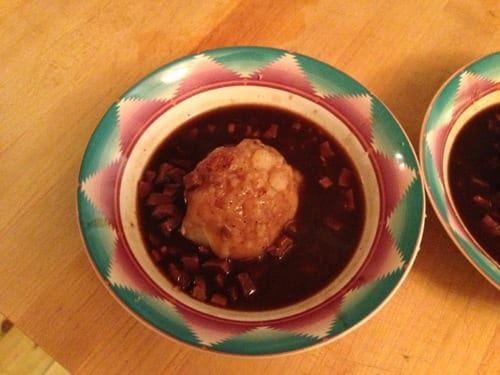 The above was a combo of leftovers from the night before: mashed potatoes, no-fat gravy, 2-3 oz of steak from one of the restaurant trips. Make the cold taters into tater balls, nuke ’em, chop the leftover steak into chunks, add to the gravy, add some more stock to make soupier, and you’re done. Divine. Eat with a spoon. We ate that while watching San Francisco dominate and annihilate Chicago. 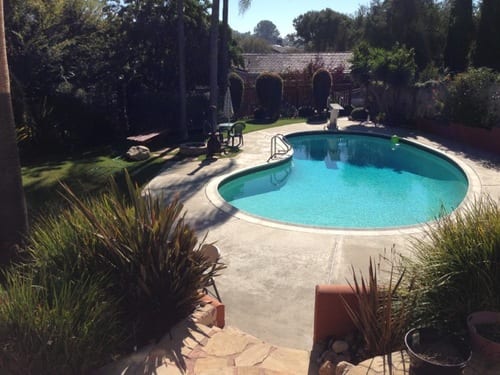 On Tuesday, we headed down from Arnold, CA, to Vista, CA for the Xgiving holiday with family. I was undecided about continuing the potato deal and since I hate being a pain in the ass in person, I opted to set it aside and to be a good and gracious guest. Bea’s sister lives right next door to her parents, her sister and family went to Vegas. We took their place, they have this pool and it was 75 on Black Friday, and this is where I spent it. 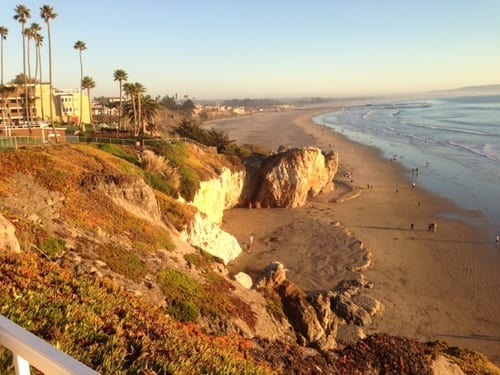 Last Saturday we took off. It was 89 on the drive through LA and still 75 in the afternoon when we stopped in Pismo Beach for the night. 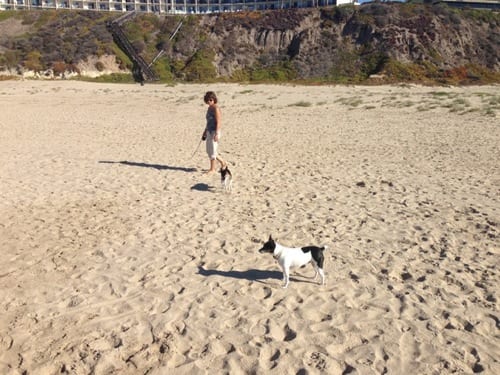 We took a stroll Sunday morning with Rotor and Nuke before heading home, eventually catching the 2nd half of the tenuous 49er win against the Saints. 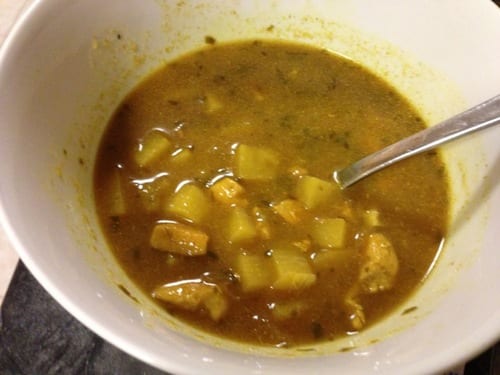 Half of 1 chicken breast between the two of us, 2-3 potatoes, a bit of onion, citrus, reduced chicken stock, zero added fat, but lots of things like cumin, curry, etc. I’ve never made Mulligatawny and have no idea of the recipe, but that’s what it reminded me of. 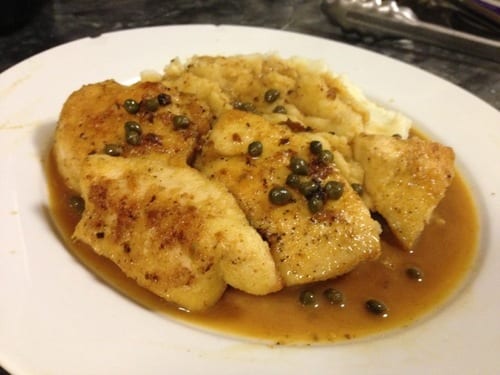 There comes a time. I still had a breast & a half of chicken, so a low fat version of chicken piccata was in the making. Here was how I spelled it out for my brother who wanted to make it for himself the next evening.

Get the pot of stock going and the salted water for your 2 potatoes. heat up the cocnut oil, dredge your chicken, brown well in the oil, 2-3 min per side. Take off, set aside (all the other stuff is going).

Deglaze the pan with the wine, let it reduce. Then add a bit of stock from your boiling pot, let reduce, add more, etc. In the meantime you should have put the potatoes in the water once at a boil.

The bits of gluten free flour you deglazed should be enough for a saucy consistency once reduced enough, but make sure you have enough volume, reduction, etc.

At the end, add the juice from the lime or lemon and a tsp or two of drained capers. Make sure the sauce is just as you want it, turn off the heat, put the chicken back in, cover and let sit while you drain potatoes and mash with the sour cream or butter. 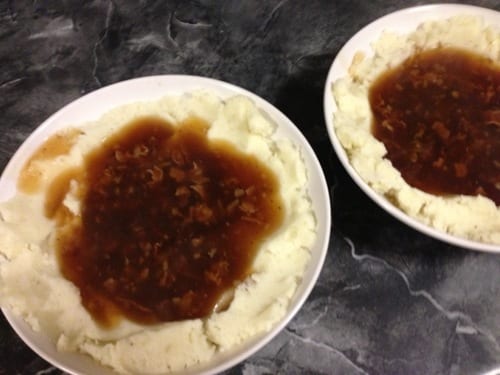 Beef stock reduced from a quart to a half pint with 1-2 oz of chopped roast beef for two servings. No added fat. Line the bowl with your mashed potatoes, ladle in your reduction. Eat it with a spoon. 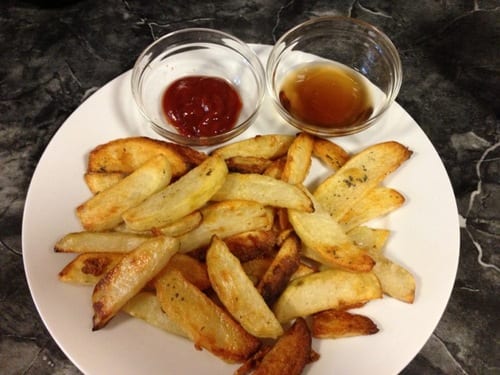 Lunch yesterday. Oven fries (very little fat), lots of salt, and a bit of TJ’s Organic Catsup and malt vinegar on the side. 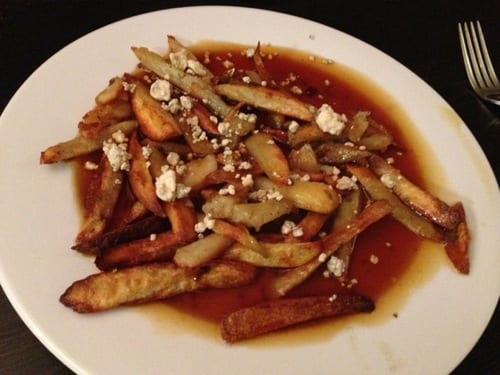 For all my Canadian friends. After the touch of drama, I just had to make my version of it, with what I had. 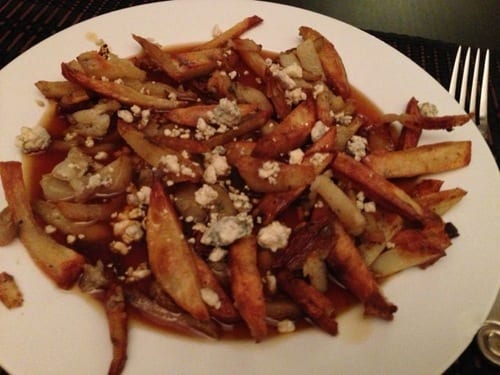 That was Bea’s portion. This was mine.

Same oven fries. Little fat. While they’ve been going, reduce 1 Qt Kitchen Basics unsalted chicken stock to about half a pint. I thickened slightly with about a tsp of potato starch in a slurry of cold water, introduced to the boil. A bit of salt & pepper, nothing else added. So, the gravy is zero fat.

Instead of cheese curds, it was a sprinkling of very ripe crumbled blue cheese I had on hand for a while. That’s the secret the French know about cheese: the riper, the less you need.

Alright, go forth and experiment.

Put all authorities trying to tell you what to do in the proverbial short pants.