Dogs Are Man’s Best Nemesis, When You Include Diet?

Going way way back, one of my favorite things to mock & ridicule for base ignorance was the Creationist—picture it—sitting there with a dog on one side, petting a cat on his lap…and the dog didn’t go after the cat. …Get this, because you’ll laf: millions of people in America fervently believe God created them like that, as companions. That’s one level of abject ignorance too dumb to even talk about, but another “sciency” one has cropped up.

Word is: dogs can digest starch!

It’s all the rage. I’ve been sent tons of links!

That’s the yawn and heres the lie: In Order To Live With People, Canines Evolved To Love Carbs (a link on Google…don’t really give a dog shit about which story, whether by Veronique Lacapra or anyone, or a “study” by Erik Axelsson). Here’s the pic from that “news,” which I didn’t even bother to read; because I’m dirty enough already (just walked my meat loving carnivores). Lesson: know DS before you even smell it; act accordingly; go from there. 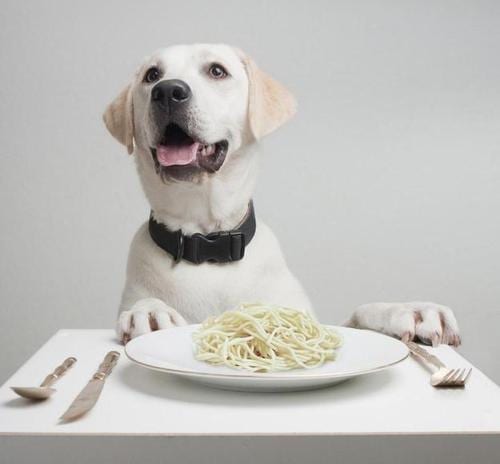 Tell you what. Go place a bowl of meat—raw even—alongside a bowl of cooked pasta. Dress it however the fuck your stupid mind would have you (…because if you don’t already know the answer and actually go to the trouble, you’re too fucking stupid to share breath with dog breath). Then toss the pasta in the trash, eat it yourself, or save it for lunch tomorrow where you’ll get approving nods in the lunchroom. Wipe the dirty, meat-laden bowl clean with a paper towel, if you even need to. That’s: evolution; and testing it.

Stupid, stupid, stupid people. You know what? Dogs ought be embarrassed on our behalf. Mine are. Right this minute, they’re down and hunkered. Soon as I told them that they were getting pasta instead of meat from now on, haven’t seen them since. …They know I get ideas all the time, and they’ve evolved to let me just work it out on my own, come to my senses over hours or days. They’ve found when it’s best to leave me alone.

…I did get an idea years back that they probably ought not be eating cheap grains in lieu of more expensive meat. This is why they turn their heads sideways and give me slack. They have faith in me.

Creationists have the stupidest, non answer for why we have companion animals like gods…opps…dogs…and cats, that aren’t exactly like gerbils & goldfish. I really haven’t looked into cats. For one, I just blogged about why. For two, their domestication has not deprived them of their essential survival abilities, which is why they live feral so very easy and naturally. But yea, cats come from Felis sylvestris, likely domesticated in The Fertile Crescent (that’s it; figure the rest out yourself; no more references so you don’t figure it out yourself).

…Way back when I was making fun of creationists over the evolution of cats & dogs—not even bothering to mention that evolution through natural selection happens every day in the lab, in test tubes and petri dishes—I was of the mind that humans had selectively bread wolf cubs (we know that genetically, all dogs come from wolves). It made sense. They’re so cute, so they say…so combine a woman who’ll unabashedly say so, and her fucker who’ll never admit it, but ridicule her instead—while holding and petting it—and you have a winning Yin-Yang combination.

They tried it. They’ve done various experiments with wolf cubs and while it’s possible and plausible, not practical in the context of survival in the wilderness. Essentially, you have to imprint each wolf cub as they grow neurons in the first few months by holding it close 24/7 so they smell you.

How about if wolves chose us? How come we automatically and so naturally assume that all selection is either natural; or if human motivated, explicitly engineered by us? We’re rather unique. It’s easy to understand how “we tame” pigeons and ducks around a pond (we bring food, they self-select). We tame bears in wildlife parks, too—where rangers have noted that the problem in designing food lockers is a measurable overlap between the smartest bears and the dumbest humans.

What if we were just so damn handsome  and capable as a species, so much so we toss food away? Imagine some wolves. …Garbage dumps. Whoa! Verim! Whoa! …And a lot easier to catch & eat than those fucking gazelles…muther fucker hard to cathch muther fuckers…. And get this, check this out: Watch what happens when I go over there and wag my tail. YOU SEE THAT!? Here, let me show you again. See? He smiled. Whoa. Whoa. …Wait! What’s that? Is he offering me a piece of meat fresh off the barbie?

Wolves chose us. Dogs are the evolutionary, self-selected product of the laziest wolves. (All the variations in size, color, fur, are explainable from in-breeding—check it out yourselves.)

But dogs, like any animal including humans, are often insatiable, and that ever-present garbage dump offered a bounty beyond vermin. Dogs eat our garbage. It’s been that way for Ten Thousand Years. There’ no mystery about it.

No idea if this was addressed in the study I didn’t bother to read, because it was stupid on premise. Dogs live about 15ish years; humans, 70ish. Dogs have a five-fold evolutionary advantage, because evolution has zero to do with Earth’s rotation on its own axis and how long it takes to revolve around the sun, in terms of our counting time. Evolution deals with species generation. This is why you can observe profound evolution in a lab with bacteria that reproduce but live only hours, as well the offspring that reproduce and die. Rinse. Wash. Repeat. Over. And over. Evolution before your eyes.

There are species of flies, like fruit flies, where the same thing is observed. Worms too. Tons of stuff. But, you can be as ignorant as you want to be. Humans, on the other hand—the only one with a brain, but you really have to wonder—sit and wax on about not observing evolution.

Dogs don’t observe an even 10,000 year profound evolution amongst their own species either, even if they could understand.

Alright, just for all the stupid people who think this is any kind of news. Ready? Only going to do this once, though I’ve written it a hundred times in the past: humans not only evolved, they migrated. They became generalists, and as such, produce more starch digesting amylase in their saliva than even their primate ancestors. Does that mean starch is essential? Does the fact we can digest fat make eating fat essential? How about protein?

What’s essential is real food. We’ve developed the enzymatic and metabolic tools to digest and live off just about everything if we have to. Thriving is a different question. What’s best is the forever open question, and why some of us still have blogs worth a dog shit to read. On the other hand, I’m pretty sure neither humans or their dogs spent a single second grazing in wheat fields. But wolves came along, and appear to have developed a bit the same generality in the process to become our dogs.

Perhaps humans aren’t so bad. How could thousands of wolf, natural born killers been wrong? 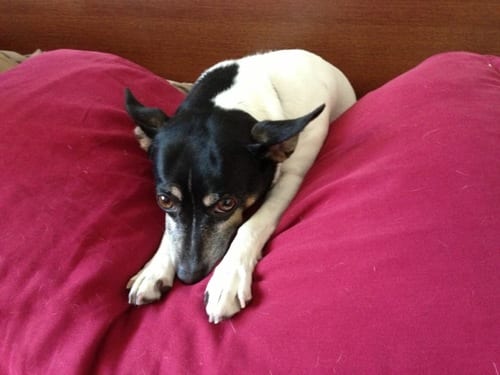 Update: OK, here, my fat dogs, deprived of pasta and other starch (they get bits of starch here are there; good they can use it, but having a hammer doesn’t compel one to be a builder). 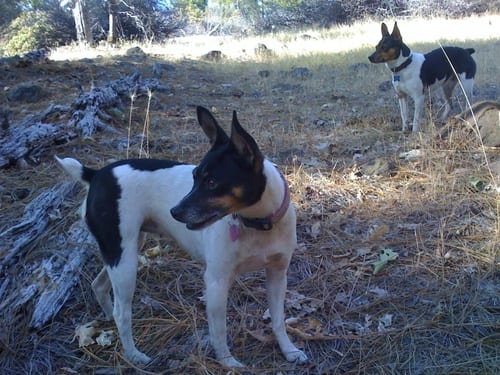 Oops, just went and gave away my wifi password.