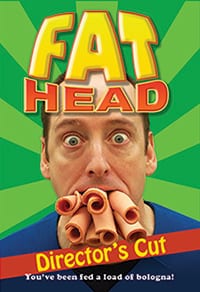 In spite of how my attitudes toward low-carbohydrate dieting have evolved over the years I nonetheless still regard it as a powerful tool, intervention or even a whole lifestyle for some.

A few years back, a documentary film came out called Fat Head (here’s some clips on YouTube). It’s available to watch on Netflix, Hulu, Amazon & iTunes. It’s a very interesting film to watch for its own evolution right there as you’re watching it. It began as Producer and Director Tom Naughton’s answer to Morgan Spurlock‘s Super Size Me documentary. So the initial focus is on how Spurlock played fast & loose with the facts, called for more regulations, made fast food outlets out to be the Anti-Christ…you get the picture.

But then, right before your very eyes, it begins evolving into something quite different; invoking evolutionary principles, calling grains, sugar and vegetable oils into question and really making a decent case for a more paleo foundation diet—though all the while Tom himself is more focussed on both carbohydrate load AND calories in his own 30-day fast food experiment (where, owing to having a “functioning brain,” he actually lost significant weight and improved his lipids). I found the film to be highly entertaining, informative, and just a fun go-round for watching even multiple times which I almost never do with anything. I also found it to be very effective in introducing people to some of the things we all drone on & on about.

Tom has created a new version and explains how it goes.

I named it Fat Head: Director’s Cut, even though I’m the director and cut both of them.  To make room for a followup sequence at the end, I cut two sections from the film. The first was the section about kids not walking to school anymore, people driving everywhere, etc.  After I learned more about the negligible effect exercise has on weight loss, I cringed a bit every time I watched that section.  What the research shows is that kids start getting fat first, then they stop moving around as much.  Before they get fat, the kids who become fat later are just as active on average as their peers.

I didn’t cringe what I saw that section, but it appeared late in the film and felt out of place. I dealt with Morgan Spurlock’s nonsense sufficiently in the first part of the film; no need to give him another whack near the end.  I uploaded that section to YouTube since it’s not part of Fat Head anymore.

Now, for the new stuff:  cutting the sections I mentioned above gave me time to add a follow-up section at the end.  Since I want anyone who has the old version and is considering getting the updated version to know exactly what’s been added, here it is.  The YouTube video below starts from about a minute before the new section:

So go take a look, consider getting yourself a copy, and pass it around to friends, family, and co-workers.