Carbs vs. Fat vs. Protein; High vs. Low; Everybody vs. Everybody
Anarchy Begins at Home: The Blog Series Part 9 – Conclusion; How to Fix Everything

I’m in complete seclusion for the week. The only distractions are self created.

Beatrice actually suggested it a while back and the original plan was to go off for a week or two, somewhere remote, and get headlong into writing the story I’ve had in my head for a while. This winter, our vacation rental is booked every single weekend, but during the week now & then, it’s empty so here I am. Alone. Crickets. Well, it’s about 30F outside, so what little wildlife there may be is hunkered down. 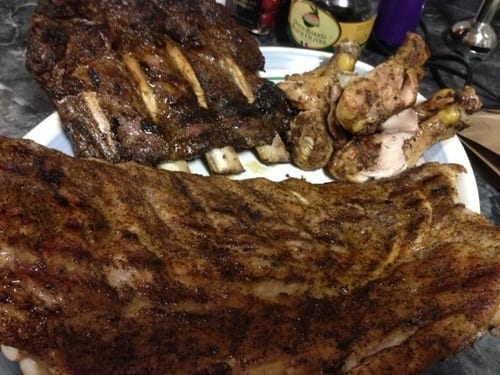 Pork Spareribs, Beef Spareribs and some chicken drumsticks for 49ers fans. Dry rubbed. The Salt Lick. 4-hr soak at 200F (low & slow), wrapped in foil. Finished off for a few minutes on the grill. Home made BBQ sauce. Game on. …But, I was so blown away at the taste of the chicken!

I got an idea.

Since I was leaving, Bea handed me $30; said: “go to the store, get some stuff and cook it up for me for lunches and dinners for the week, K?” K.

Because the chicken at a long bake like that was so amazing, I decided to go back to an old favorite: chicken adobo, a Philippine dish that I’ve always loved. I’ve been there, to “The PI,” on about 30 different occasions, living in the region for 5 years; spent months there in work and on vacation—often 30 days at a time—and this was always a mainstay, along with rice & fish. Balut now & then, too, but only when well drunk. 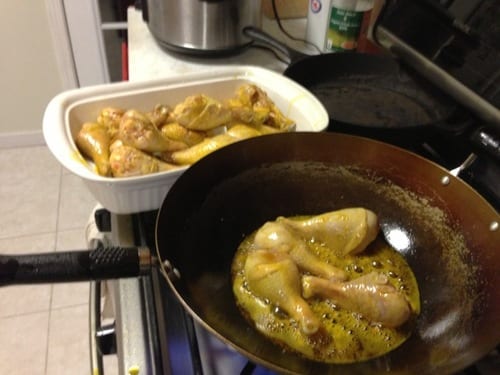 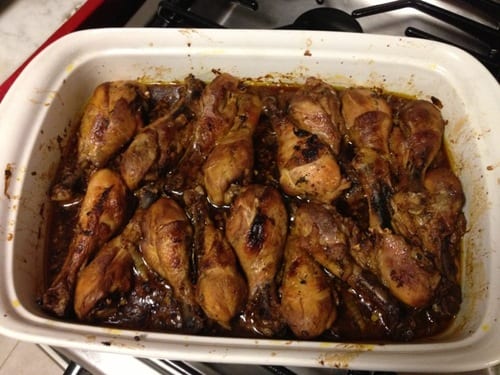 Soak it uncovered, 250F for three hours. Plop it right under the high broiler for about 5 minutes or so once the broiler is fired or glowing red. The recipe is basic. The vinegar comes out so nicely. Wowzers. Now all you need is some white rice or white rice cooked in chicken stock as I do.

…I was first introduced to chicken adobo in 1983 by a woman who was a veritable Mother Teresa to the family she chose to devote her life too. She died just over a year ago at 86, and her Pulitzer Prize winning “son,” Alex Tizon, engineered a wonderful article about her in the Seattle Times.

Miss Pulido would live a different kind of love story, one marked by a devotion so rare that even those closest to her still struggle to comprehend it. 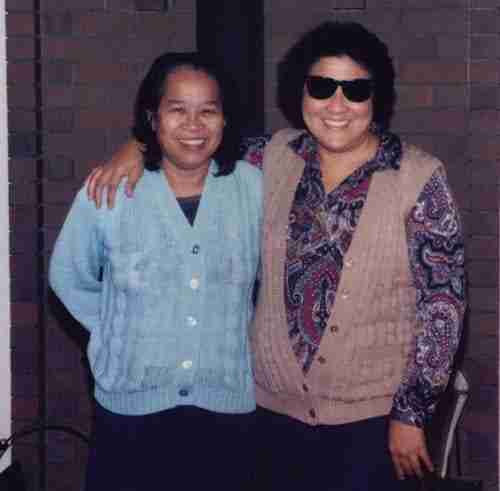 I remember, in particular, a time I was in the house and she was cooking up a storm for something or the other, and I shadowed her. Adobo. Pancit. Lumpia. Many other things too, and she loved to get that attention she deserved, for putting the attention she did into everything she did.

I knew her over the space of perhaps a year and a half. She was always smiling and laughing. And Alex, that aforementioned? Knowing him as he was then, UofO graduate student? Perhaps it was my first exposure to a person who has this insatiable need to observe the social behavior of human animals and critique it. Look at the tagline of the blog. Since 2003 and counting.

…I also did a pot roast in the crock overnight. And I stole as much as I could get away with, stopping short of wrath hopefully. Though apart, Bea and I have  good food for the week.

…What am I up to? Thanks for asking. Right now, finally getting into writing action/suspense. I need a name for a character. One syllable for the fist name, at most two for the last name, but one is probably preferable. Right now, I’m using ‘xx.’ Should be an easy find/replace, once I’m set. Character is everything.

Xx is an ex-Navy, hard-on-jet-pilot. F/A-18s. When he got out, he started a company to build private jets and of course, he was marvelously successful. He’s a lightweight billionaire, now. Rather than focusing on airframes and engines, he focused on advanced avionics. But that’s part of the story.

And, he’s private. Doesn’t do the shit millionaires and billionaires are supposed to do, so people don’t hate them out of the mundane Starbuck’s chat-envy that’s so banally quotidian. He loves to be hated but neither does he go out of his way. He’d rather be hated than receive love from the world he despises. He doesn’t vote for anyone but himself. He avoids confrontation. He’s a sniper kind of killer, prefering to slink off after the deed. Live to kill righteously another day.

He’s a hands-on kinda guy. There’s no organization. He kills them himself.

When he begins killing across the country in a pattern designed to be linked, no one can figure it out. He has private jets at his disposal that he pilots himself.

Only one figures it out.

Will that FBI agent take him down, or join him?