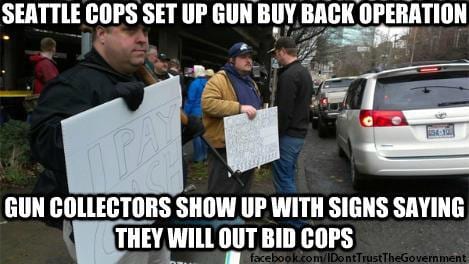 Nothing gives me an eye roll quite as much as hearing the phrase “gun culture” applied to America. Alls I can’t figure out is which is dominant. Is it the “gun culture,” “big-car culture,” The “drive-in, diners & dives culture,” or something else altogether?

Or, do all these sub-cultures simply have a common thread running through them, manifest when people are so messily left to their own proclivities to pursue their own values for they own sakes?

Police officers in Seattle, Washington held their first gun buyback program in 20 years this weekend, underneath interstate 5,  and soon found that private gun collectors were working the large crowd as little makeshift gun shows began dotting the parking lot and sidewalks. Some even had “cash for guns” signs prominently displayed.

Police stood in awe as gun enthusiasts and collectors waved wads of cash for the guns being held by those standing in line for the buyback program.

People that had arrived to trade in their weapons for $100 or $200 BuyBack gift cards ($100 for handguns, shotguns and rifles, and $200 for assault weapons) soon realized that gun collectors were there and paying top dollar for collectible firearms. So, as the line for the chump cards got longer and longer people began to jump ship and head over to the dealers.

That’s just all sorts of in-your-fucking-face wonderful, giving me a needed laf and a moral high-five all in one, on a Monday morning.

John Diaz, Seattles Police Chief,  wasn’t pleased with the turn of events stating “I’d prefer they wouldn’t sell them,” but admitted it’s perfectly legal for private individuals to buy and sell guns, FOR NOW. Mayor Mike McGinn said at a news conference the private transactions are a loophole that needs to be closed. “There’s no background checks, and some (guns) could be exchanged on the streets that shouldn’t be in circulation.”

But Schuyler Taylor, a previous gun retailer attending the event in hopes of buying weapons, asked “Why not offer them cash versus a gift card? I’m still taking the guns off the streets; they’re just going in my safe.”

Ah, but that’s an easy question to answer. Lefties and commies love guns. They just want them exclusively in the hands of an elite cadre of professionals. They want them monopolized. 911 is your “equalizer,” but most importantly, it greases the wheel of state dominance—to which the bitches have devoted their lives, taking great care to stay on the right side of their “alpha male.”

People were reportedly, at one point, jumping out of vehicles  whilst sitting in traffic – making on the spot deals with the gun buyers.

But the BuyBack wasn’t a bust. On the contrary – their $80,000 supply of gift cards didn’t last but 2 hours, and by 11:00 am they began attempting to issue IOU’s at which point the entire crowd responded by turning and marching toward the gun dealers, forcing the police officers to pack it up for the day.

Ha, imagine the scene. There’s a metaphor for impotence for ya. This whole dumb buy-back deal is always touted in at least some tinge of moral underpinning—people coming to Jesus, getting right with God yada yada bla bla bla.

It’s nothing of the sort. It’s a market, just like anything else. Chances are many of those people got a gun in trade for sex, drugs, rock & roll or a water pump replacement. And it just sat there until they get a gift certificate to go play at Ronald McDonald’s for an afternoon, and a meal to boot.

On one last note of hilarity, the Seattle Police department claims that they will check the buyback guns to see if any were previously stolen and, if so, try to return them to the rightful owners! LOL. Brilliant!

Actually, that would be a “brilliant” exercise of police work. See, rather than actually do something about real crime (instead of raising revenue from people committing traffic infractions), they could set up a market to incentivize the theft of guns. Have a buy back program every weekend. “Go to work, Monday – Friday, steal as many guns as you can; we’ll give you $100-200 for each, no questions asked, and we don’t have to get our hands dirty.”

In 1992, Seattle police collected more than 1,200 guns in a four-day buyback program.

Now the only question is, when will the Seattle Police department stage the next gun show?

Yea, 20 years is a long time. Clearly, that buy-back-gun-show-program did nothing to rid Seattle of gun crimes in the ensuing 20 years. Clearly, they need to have gun shows and fence-for-thieves operations more often.