Lothar “Lute” Nikoley is Out of Emergency Surgery

It happened quite suddenly. He tuned 75 on Monday. You’ve seen him in comments and recently in a guest post. 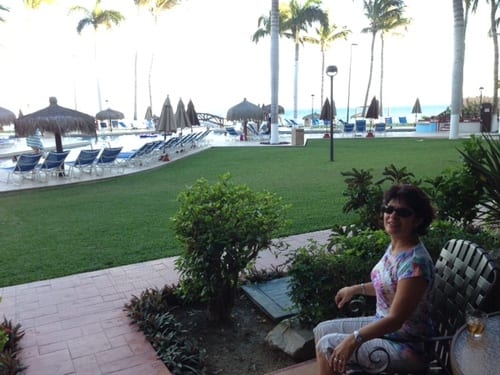 A few years ago

I love that pic because we were standing there soon after dad showed up at our place and neither of us realized. Someone pointed out—as we stood there talking to everyone—that we were accidentally dressed the same. A pic got snapped as I realized, turned my head and laffed.

The day after his birthday he was out for dinner and got stabbing pain he recognized. You see, 25 years ago he had kidney stones so painful that that it knocked him out as my mom was driving over Donner Summit from visiting family in Reno, to home in San Jose. They put him in a bath of water and using sound waves, pulverized the stones while preserving the tissue. You piss out the tiny gravel.

…So they did their imaging and analysis once they got to the hospital the other night. He had three rather large stones in his kidneys. They scheduled the same op: pulverize them with Led Zeppelin at high volume, under water. Gregorian Chants aren’t going to cut it. That was to be at 1:30pm today.

He was doing rather fine but then got a huge fever, refused medication and food and by 2:30am this morning, he was unresponsive to my mom’s urgings and intervention. She called 911 immediately (…go ahead and put it to me; I expect it, and you know what I mean).

When the paramedics got there, they told my mom he’d just had too much to drink or had ODd on meds. You don’t know my mom. She’s gone head to head with the debt-collection pond scum for 20 years of working for my company, many of them lawyers who are incompetent for any other sort of work. She can not be intimidated by anyone, ever, and especially not when it involves anyone she loves and cares for (she’s a hospital hawk). She yelled at them: “HE REFUSED HIS PAIN MEDS 6 HOURS AGO AND HASN’T HAD A DRINK IN 2 DAYS!”

(Fucking wastes of a fuck.)

When my mom recounted this to me over the phone this morning, my knee-jerk response was: “why should it have mattered? Were they going to refuse him emergency treatment because they thought him drugged out?” Mom: “no, but they would have treated him different; that was unacceptable, and it was confirmed on entry that he had no drugs or alcohol in his system.”

I’m so proud of her it makes me weep to think about it.

So the deal is that of the three stones, one passed from the kidney, proceeded to block the ureter, and caused an infection. Infections always go to the the head of the line because those millions of littler fuckers will overrule all Gods and all prayers in hours.

Long story short: I spoke with the female Indian surgeon (not really relevant—her gender & race—but we still live in ignorant times, so there you go: suck on it, racists and “racially aware”) on the phone shortly before he went in. Told her she’s speaking to his favorite son—that tuns 52 next week. She chuckled. That broke the ice. My main question was how come they weren’t dealing with the stones themselves, and asked: “is this because the infection is now the principle concern?” Yep. Then she explained how they were going to put in a stent.

“Is that to move the stone somewhere, or bypass it so urine can drain past?”

“Bypass it,” she replied.

…I went off on family Facebook friends and friends of friends last night in comments to an update from my mom. I was not measured or kind. I don’t care to “understand.”

I woke up regretting it a bit (this happens), until I learned what had transpired over the interim in wee hours, at which point I doubled down. This probably fits quite in line with some of the comment discussion on my latest post. My mom had posted a simple FB update: “Just to let you all know, Lute is down with kidney stones. We don’t know if treatment is needed, or just wait and see for a few days.” His 75th birthday party was scheduled for this Saturday, now cancelled. This was before the conflagration.

What ensued in comments was a flood of well wishes, which is wonderful, per se. But most didn’t stop at the metaphysically impotent but emotionally important well wishes. Nope, most had to invoke their own scam of metaphysical relevance.

Lots of them. So I went off. 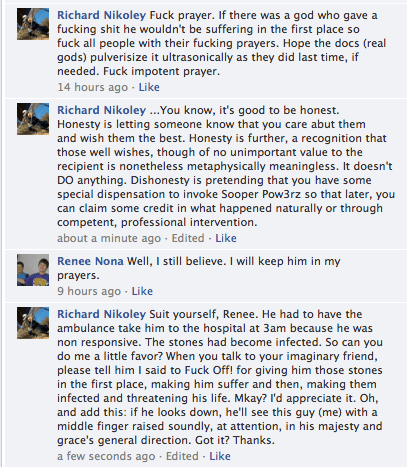 I loath the general failure to make sound distinctions. This is a perfect example. It’s a distinction between the metaphysically impotent and the emotionally powerful, and billions of people on planet Earth conflate that important, 180-degree-distinction every day.

Yes, you can argue that “I’ll pray for you” is just a colloquial expression. Agreed, but not in that morass of absolute literalists I’m dealing with. They actually believe that more prayer equals potential metaphysical intervention. And yes, they are generally well-functioning human beings otherwise. But they also raise kids, and they teach them to be just as ignorant.

All metaphysically impotent, but emotionally powerful well wishes for my dad are welcome and jump-for-joy stuff. Any doctors or urologists with anything to make me aware of are welcome even more, comments or email. Dad is family here. Lute, is family here. He’ll read this for sure and my bits about prayer and such are sure to irritate him, but I think irritation gets the blood pumping, which speeds recovery.

I love you dearly, dad.