At root: many live at latitudes they didn't evolve to live in given their skin color (darker skin is more resistant to sunlight and vitamin D synthesis).
It's far best to broil fish in a pan, and not on one of those stupid broiling sheets—designed by Ivan the Terrible—to make it as dry and fatless as possible.

I greatly enjoyed being one of the first to know about and promote the Ancestral Health Symposium, long before the beginning of it. Brent Pottenger and Aaron Blaisdell have never been anything but cordial and friendly with me, and it was a tremendous pleasure to be involved with both previous events as a layman / blogger presenter.

When the video of my AHS12 presentation got released, I wrote this in my post announcing it:

AHS has just put out the call for presentation submissions for AHS13 in Atlanta next August. Deadline is January 15th, and while I have mostly leaned toward not doing it again, I’m leaving it open for consideration. I’ll chew on what value I might be able to bring and then decide definitively.

I had recently been considering submitting a proposal for a wholly different sort of presentation from what I’ve done in the last two: a sciency one with references & shit. Resistant Starch, given my penchant for starchy Real Foods, potatoes and The Potato Diet, recently. I thought it might be a nice adjunct to the Jaminet-esque Safe Starch debate of AHS12.

But I skate on thin ice, given the hoopla surrounding the combination in which I make my fingers hit keys on the board…often in good ways, often in bad ways, but always whatever rolls at the moment.

That being the given—and my resolution to recapture my principal original focus of being a real help to real people out there, moving forward—I’ve decided to pass. Whether I submit and get turned down, or submit and get accepted, there will be needless drama. I care not a wit about my own lot in that regard, but I do have a sense that the spectacle detracts from what AHS is trying to accomplish, which I support.

They have a right to not be associated with me. Even submitting a proposal at this point entails some compelled association on my part.

Finally, I think I’m better off for it. So is everyone else. I don’t like being told what to do by anyone and will always affirmatively make a point of that. AHS has never told me what to do, of course, but there is an undercurrent of expectation that ultimately translates to upholding standards of decorum AHS would prefer. And this probably tends to fuck me up, arguably makes me more outlandish than I might otherwise be.

I’m simply not cut out for upholding anyone’s standards but my own. Accordingly, it’s best for me to only do speaking engagements where I’ve been explicitly invited by those who know all about what I’m all about.

…And so henceforth, nobody has any arguments about how the way I make my fingers move on the keyboard reflects in any way on the Ancestral Health Society.

I really haven’t taken this much time away in a long time…in the fog of who-the-fuck cares? It’s like 2 weeks, about. I’ve lost count.

Went days without even looking at email, comments on the blog—ensuing or current [Paleo / LC / neo-KKK] drama…even as the most current drama I contributed to is prescient. But, sometimes, whether by happenstance or design, it’s eye-opening to step away from something, in order to come to clearly understand how abjectly meaningless it is. Accomplished. Finally.

I have but one NY Res: Distance myself from the drama. Yea, I have promoted it—badly too—but it seems to me that I feed into it as well, and that’s actually problematic for me on various levels. I engage drama principally to make a big initial deal, have at it, everyone shoot their wad, quench it, and move on to good…drama arrives again sometime later. Feed the flock as it were. But it seems that’s not going to happen with a coupla terrier-bitch-cunts on the loose.

…So I have little choice in the matter—not wanting to waste precious life minutes. Why not just let them be terrier-bitch-cunts on their own, with their small, embittered followings? Right? So I’m done with it…kinda sorry I ever got caught up in it, but hindsight is always more accurate than foresight. Anyway: Never. Again. A. Mention. Forever. They’re ignored. This constitutes even the last indirect mention. I’m going to go all Robb Wolf on you, but without the background science. Seriously. Robb is kinda my preeminent conscience, in that I need to focus on helping the same sorts of dying and debilitated folks I’ve helped over the years. Fuck the terrier-bitch-cunts.

I license you to hold me to that, in comments. Me giving you license means you’re automatically right and I’m wrong, if I violate. 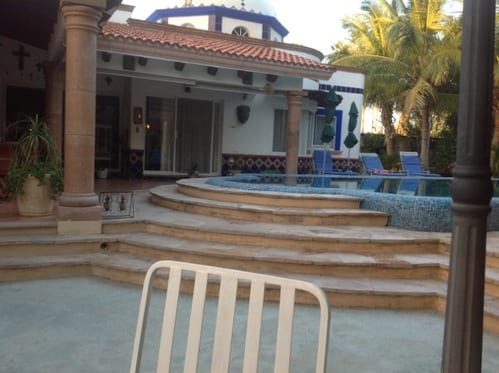 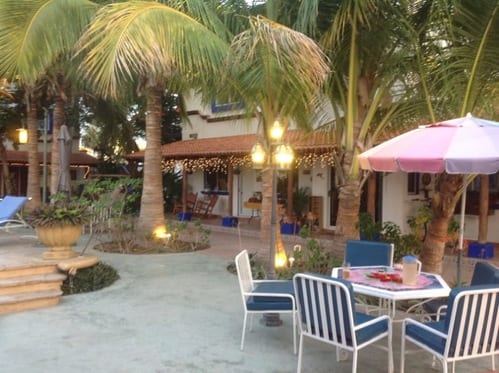 Let me talk about Richard and Gloria. Richard is an expat from my neck of the woods, did good in his chosen professional endeavors, longed for a simpler life, and built this place some years back from, in his words: “a dirt lot & dogs’ shit.” Took him six years, completed in 2009.

Here’s his website: Hacienda Paraiso Inn. We only found out about it because Beatrice, my wife, got word from her sister and bro-in-law who stayed there last October. It was uncanny, their admonishment to go. They’re not stupid, quite the contrary. So we booked. Turns out, this B&B is the top rated in all of the Baja penninsula. Guest satisfaction, of course. 169, 5-star. 8, 4-star. 1, 1-star…and he tells everyone the story of the 1-star. Richard is the sort of guy any typical paleo guy or gal would love. In his “retired” leisure, his passion is science, biology. Not interested in politics, religion, any of that crap so far as I can tell. Among a bunch of more professional exchanges—because he makes no assumptions about his guests—we did have one evening where we got to have all sorts of more meaningful conversation. If you go there, ask him for it.

I always thought I would hate a bed & breakfast Inn. I’m only friendly if you interest me, so I’m totally selfish in that regard. I could never wrap my mind around having to be polite to random strangers around a breakfast table. Thus, I have forever spurned any notion or idea of doing a B&B sort of thing anywhere, anytime.

I’ll get to how stupid, foolish and a squanderer of opportunity I was after the rest of the pics. 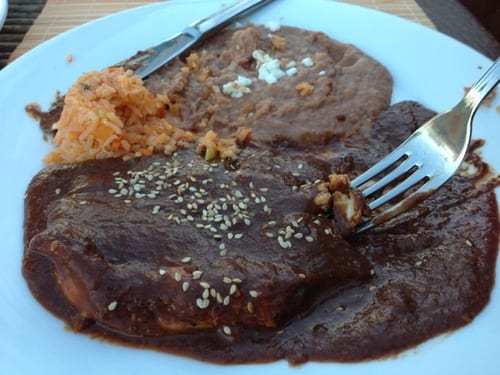 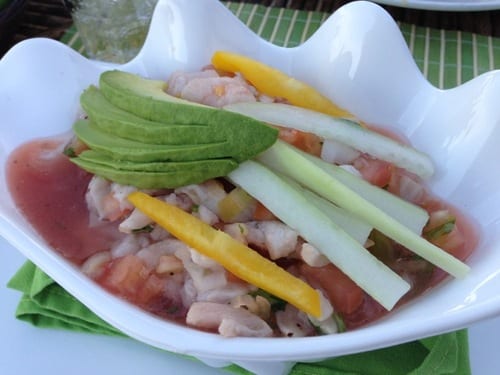 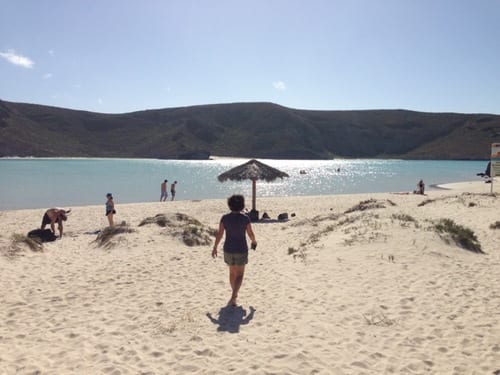 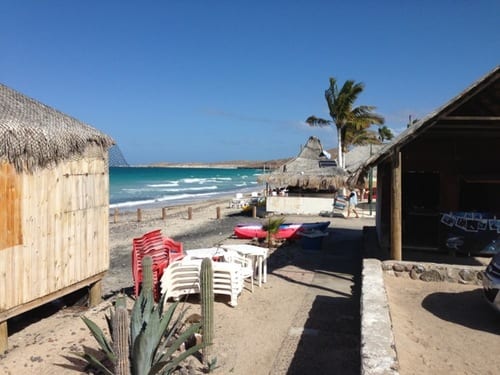 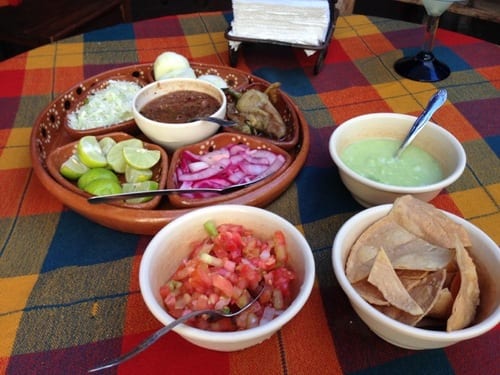 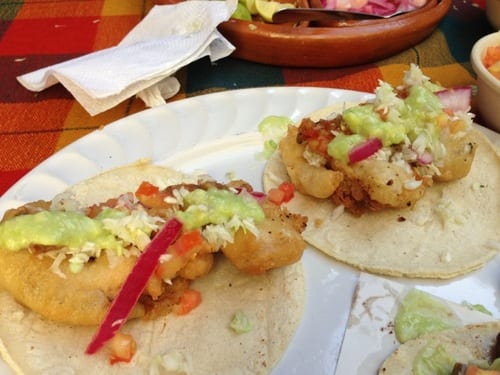 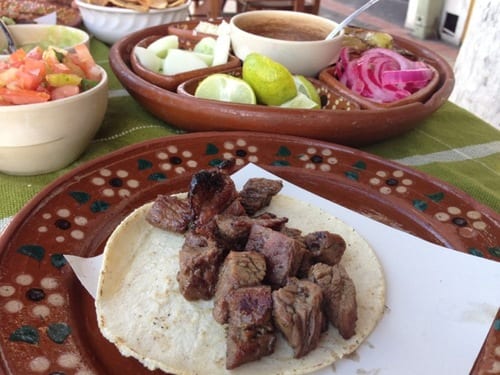 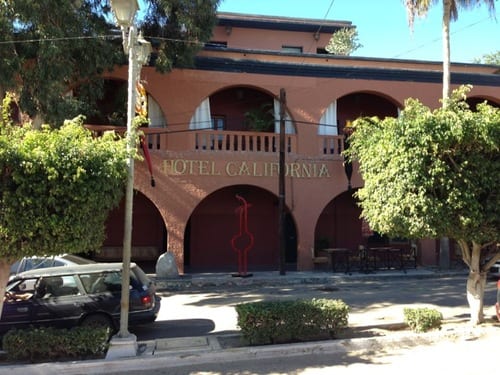 On a Dark Desert Highway…

Richard has six rooms in the place, sleeps two each. One had ben occupied by Ed and Gail since Christmas. A French contingent had just vacated and when we arrived on New Year’s Day, Aaron and Erin showed up 5 minutes later. Yea, c’est quoi ce truc? Husband and wife with almost the same first name? They were the vegetarians—not vegans, HUGE diff.

We all got along swimmingly. I actually looked forward to the communal Mexican breakfasts, that were very impressive, delicious.

Ed & Gail were an initial mystery to me. I’d said a ‘hi’ to them as they were heading out first day we were there, but, just a ‘hi’ back. No engagement. I wondered. Unsociable like me? Not interested? Self absorbed, like me? Turns out, they’re accomplished world travelers, and it just took a nudge or two.

…Actually, being away from all things blog and comments, and having loved the Tom Cruise film Jack Reacher for its balance of crime intrigue and super-hero acton, I set about to read the series, beginning with the first, Killing Floor

, published in about ’98. While I haven’t read this genre for many years, I’m an old Ludlum, Clavell (more obscure stuff like King Rat mostly), and Lustbader (and Flynn—read Term Limits) fan going way back…and I knew who Jason Borne was in 1985.

This was a new printing that contemplates the film, and included is a marvelous 10-page introduction by Lee Child about how he became such a writer, what was important to him, and in particular, what he wanted out of a character like Jack Reacher—and even the touching story about how he came up with the name. For that first writing attempt, I could critique on a number of levels, given his competition. But the Reacher character is definitely unique and solidly up my alley. I look forward to reading more. It could interfere with blogging.

…It’s about a 500 page book and I was maybe 1/3 through it. On day two, Ed stops off where I’m reading in the courtyard of the villa and plops down a Grisham novel he’d just finished. He gave it to me.

Long story short: I read night & day, finished Killing Floor, and gave it to Ed on the last day in exchange. The way I roll.

Then, we spent that last day together. Ed, Gail, Beatrice & I. Rather than them take a bus for hours back down to Cabo for their flight out, they shared the space in our rental car and we made a whole day of it.

They bought us lunch at Hotel California in Todos Santos on the drive back. FYI, it’s quite charming, rather rustic charm and does not smack of overdone commercialism in the slightest. Update: wouldn’t you know it? Ed has a blog too, and he blogged about the final day together.

Miracles do happen, but they happen because of human conscience and good will.