Reflections on the Historical Importance of God

I was reflecting on the post I did yesterday about the decline of religion, even in America. You have no idea what I thought about it, but I’ll tell you this: had nothing to do with what I perceive as the illogic of it, or anything like that. I dwelled on the practical and historical, instead.

Here’s one example of the practical-historical going back to an experience while touring Europe in 2006.

…I kept going back to a place I’d lived an hour from in France for two years in the early 90s, but never saw until I went back those many years later. Here’s the Pont du Gard, as anyone knows, but what’s important is that while it appears to be an ancient bridge and modern monument, its principle function was as a 30-mile-long aqueduct.

The Pont du Gard is an ancient Roman aqueduct bridge that crosses the Gardon River in Vers-Pont-du-Gard near Remoulins, in the Gard département of southern France. It is part of the Nîmes aqueduct, a 50 km-long (31 mi) structure built by the Romans to carry water from a spring at Uzès to the Roman colony of Nemausus (Nîmes). Because the terrain between the two points is hilly, the aqueduct – built mostly underground – took a long, winding route that crossed the gorge of the Gardon, requiring the construction of an aqueduct bridge. Built in the 1st century AD, the Pont du Gard is the highest of all Roman aqueduct bridges and is the best preserved after the Aqueduct of Segovia. It was added to UNESCO’s list of World Heritage Sites in 1985 because of its historical importance. 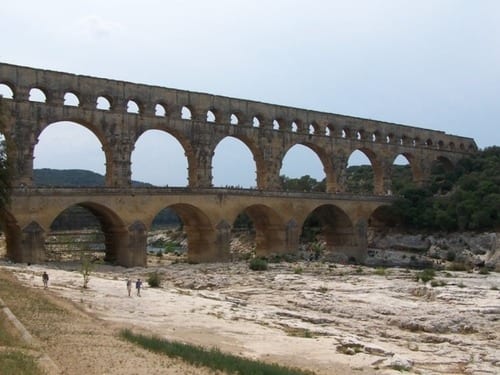 The Roman engineering is such that in an entire 30 miles—90% underground—from a spring source of water to Nîmes, the total drop is about 30 feet, a foot a mile. It delivered 9 million gallons of water per day, about 100 gallons per minute.

So what? Well, that’s the thing to me. When was it built? Archeological and historical references differ. But basically, it was built around ~0 BC/AD. Some estimates put it at 20 BC; others, 40-50 AD. In other words, this was the least important thing happening in the world 2000 years ago.

Here’s my point: I was a tyke in the 1960s. I was not shown two photos: one of a social misfit on a donkey who needed 12 sycophants and his dirty sandaled feet washed by women—and dried by their long hair—everywhere he went, OR, a picture of a Roman aqueduct built at the same time that supplied a city with 9 million gallons of water daily from 30 miles away, and used great use of subterranain and shady areas to keep the water cool.

How come I wasn’t—how come no kid is presented with that simple choice of kid-ignorant allegiance? …I’m guessing it’s because everyone knows what they’ll all choose. I know what I’d have chosen, especially had their been no caveat that I’ll burn in hell for eternity if I don’t choose the poor derelict.

And that right there is prescient, revealing. And it’s evil. And parents have no idea they’re accomplices to evil like that.

…Later in the day, we went back to Avignon where we’d been the evening before. That’ll teach you Catholics to elect a Frenchman as pope. Ha, Rome got the finger for 67 years. Cool, but that all happened one thousand, three hundred years after that engineering marvel I just showed you. 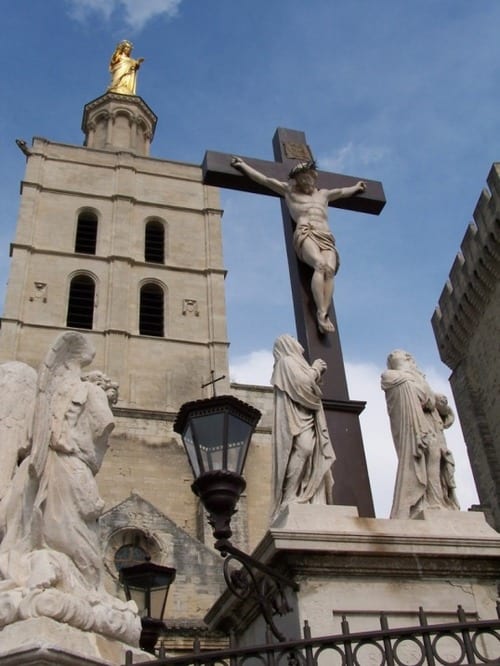 Not impressed…except by the aforementioned finger.

In other news, I’m sure the church was involved in commissioning Brunelleschi to build the world’s most advanced fee standing dome up until we got Football in America; but alas, that wasn’t until about one thousand, four hundred years later.

For those with any interest, all my few posts about my 6,000KM Eurotrek by car, from Paris to Barcelona, hugging the Med to Pizza, over to florence, back up through Italy, Switzerland, Germany and back to Paris in three weeks in 2006, here’s the July 2006 Archive. There’s not a whole lot. I got caught up. Oh, and here’s the specific post that prefigures this post.

Give your kids all the options. Wouldja? I’d have absolutely chosen differently and it would have made for a radically different life.

I love hating God (that’s hyperbole, of course). I wasted 30 years of my one and only life in some part being a subject of his majesty (more hyperbole). No, it was actually quite a wonderful life in many respects. It’s just that had it been up to me, knowing that such feats of engineering were going on at the time of the Jesus Christ hoopla, I’d have chosen to worship those Roman engineers, instead (given that we seem to have to worship something).