…the state of Colorado, apparently, still wants to live in the 15th century: Just a few days ago, a bill was introduced into my home state’s legislature that would allow teachers “to miseducate students about evolution, whether by teaching creationism as a scientifically credible alternative or merely by misrepresenting evolution as scientifically controversial.”

We have the Internet and it’s for smart, thinking people, including inquisitive kids. Creationism is effectively dead, and it’s time to stop kicking the corpse. Let it go. Let them teach their kids to be ignorant, to be rightly laughed at for their ignorance.

More Young People Are Moving Away From Religion, But Why?

One-fifth of Americans are religiously unaffiliated — higher than at any time in recent U.S. history — and those younger than 30 especially seem to be drifting from organized religion. A third of young Americans say they don’t belong to any religion. [emphasis added]

Those kinds of numbers and the rate of change is a tide swell. Ignorance, lies…fantasies taken for literal…always lose eventually. In the Information age, it accelerates. Parents and pastors are about the last place young people go for valid information, anymore—as it should justly be, because they have defaulted on their responsibility by teaching them their fear-based bullshit superstitions, instead of hard-nosed reality. Now, thank His Noodlyness, with just a little effort, anyone—kids too—can find far better and more accurate information on the Internet than their parents, pastors, and in some cases even teachers, possess on most topics. This is a wonderful thing.

Losing Our Religion: The Growth Of The ‘Nones’

This week, Morning Edition explores the “nones” — Americans who say they don’t identify with any religion. Demographers have given them this name because when asked to identify their religion, that’s their answer: “none.”

In October, the Pew Research Center released a study, ‘Nones’ on the Rise, that takes a closer look at the 46 million people who answered none to the religion question in 2012. According to Pew, one-fifth of American adults have no religious affiliation, a trend that has for years been on the rise.

You can go to the link at Pew and really dig into the mounds of data, but even a cursory look will demonstrate to you that just about no matter how you slice the data…by ethnicity, gender, income, politics, education, age etc., etc….people are getting smarter and smarter, dumping stupid, ineffective superstition for reality in real numbers and as a trend. Eventually a tipping point will be reached and the trend will accelerate more and more. It will someday be completely unfashionable to be seen as so ignorant as to believe literally in a religion. Fun, wholsome traditions will likely remain—rather like lots of atheist Jews practice today.

Alright, now for some graphs and data. 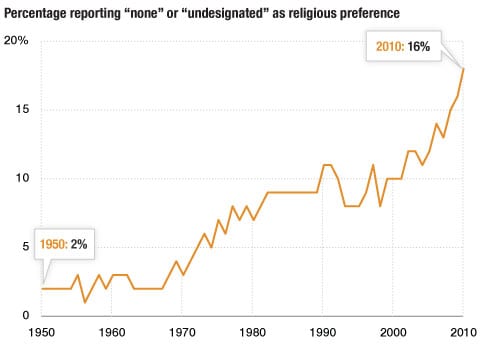 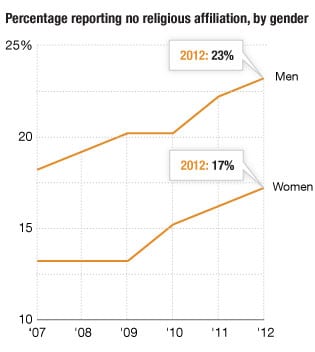 C’mon Womyn, before I go all misogynist on you. 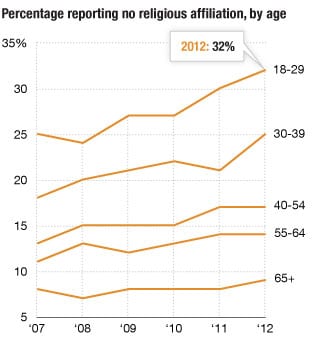 Shit, even the geezers trending up. 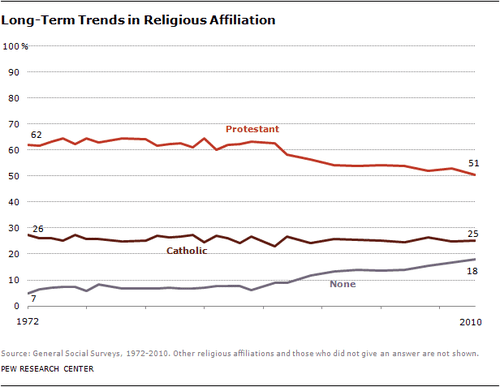 Doom. Soon there will be more “Nuns” than Catholics. 🙂 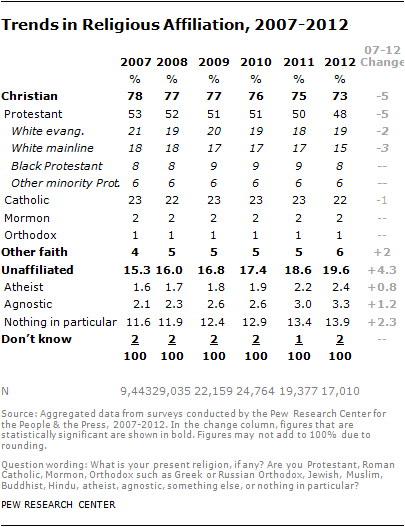 How wonderful. I knew I was solidly on the right track when I literally raised my middle finger to the heavens in October of 1990 and never looked back for a second. My life improved immediately and immensely.

Kids: If your parents, relatives, or friends profess belief in any sort of supernatural being (God, Jesus, Allah, Ghosts) or places (heaven, hell, purgatory) they are not dealing in reality and no matter how wonderful they may be as parents, family, or friends and no matter how good their intentions, they are giving you false, primitive information based on superstition and ignorance that will likely make you uncompetitive, and potentially, a laughing stock in this modern, increasingly informed and critical world.

Tell ’em you love ’em, but then go get your information elsewhere. And kids? You’re not the only one (see: Kids Without God).