I’m Crazy About Kefir and Kombucha

Alright, I admit I used to roll my eyes at all the talk in PGP circles (Pretty Good Paleo) over making and drinking Kefir, and brewing and drinking Kombucha. I probably even laffed out loud once or twice, too.

Respectively, from the Wikipedia links:

Kefir (pronounced /kəˈfɪər/ kə-feer) (or alternatively kefīrs, keefir, kephir, kewra, talai, mudu kekiya, milk kefir, búlgaros) is a fermented milk drink made with kefir grains and is believed to have its origins in the Caucasus Mountains. It is prepared by inoculating cow, goat, or sheep’s milk with kefir grains. Traditional kefir was made in skin bags that were hung near a doorway; the bag would be knocked by anyone passing through the doorway to help keep the milk and kefir grains well mixed.

Kombucha is an effervescent fermentation of sweetened tea that is used as a functional food.

Sometimes referred to as a “mushroom” or “mother”, the kombucha culture is actually a symbiotic colony of bacteria and yeast (SCOBY) […] comprising Acetobacter (a genus of acetic acid bacteria) and one or more yeasts. These form a zoogleal mat. In Chinese, this microbial culture is called haomo, or jiaomu in Mandarin, (Chinese: 酵母; literally “yeast”).

[Note: “kefir grains” are a curdlike clump of bacteria & yeast that resembles chopped cauliflower. There’s no grass seeds in it.]

I never took stock before, but something recently (another experiment I’ll reveal below and then blog about in some weeks) motivated me to take a look. Turns out it may be time to chuck the yogurt because kefir has way more probiotic nutrition in terms of friendly bacteria and beneficial yeasts.  Kombucha is just plan delicious and also very probiotic. I’m referring to the plain version of both, though there are plenty of flavors available if that’s your thang.

For the time being, I’m trying these commercial products from Whole Foods:

I just love the taste of both. You can’t get real buttermilk anymore since forever, but plain kefir has that thick creamy consistency and sour taste of buttermilk. Kombucha is actually a bit fizzy which really surprised me, and reminds me a little bit like a tablespoon of apple cider vinegar mixed in club soda as a refreshing drink.

Anyway, I’m crazy about both and about trying funny new things. For instance, this morning I had about 6 oz of kefir and when done, quite a bit sticks to the side of the glass because it’s thick (think yogurt drink). I keep fresh squeezed OJ around (Whole Foods has a machine that’s fun to watch) for up to 4-6oz some mornings (the dose makes the poison). I put my 6oz right in the glass with the kefir remnants, stirred, et voilà! Instant creamy Orange Julius drink.

Owing to the slight vinegar element of Kombucha, I intend this afternoon to make a “sauce” of part kefir and part Kombucha (perhaps a bit of added malt vinegar too) in order to dip slices of previously baked potato (after cooling overnight to form resistant starch, I keep potatoes on the counter for up to a couple of weeks—no greening or sprouting).

OK, now for the slight downside. If you search around the Internet there’s endless claims about how these two fermented beverages cure just about anything and everything—cancer too! Well, I’m sure it’s better to have a healthy gut than a non healthy one and that’s a claim I’ll buy. And then whatever having a healthy gut does for you over having a not healthy one, I’ll buy that too. Beyond that, it’s right back to the same thing as always: how does it work for you? And in that regard, it’s too soon for me to tell anything except that I love the taste and texture.

Chris Kresser has a post on Kefir that’s worth a look, Kefir: the not-quite-Paleo superfood. Among the potential health benefits according to Chris: gut, bone and immune system health.

Besides containing highly beneficial bacteria and yeasts, kefir is a rich source of many different vitamins, minerals and essential amino acids that promote healing and repair, as well as general health maintenance. (2) Kefir contains high levels of thiamin, B12, calcium, folates and Vitamin K2. It is a good source of biotin, a B vitamin that HELPS the body assimilate other B vitamins. The complete proteins in kefir are already partially digested, and are therefore more easily utilized by the body. Like many other dairy products, kefir is a great source of minerals like calcium and magnesium, as well as phosphorus, which helps the body utilize carbohydrates, fats and proteins for cell growth, maintenance and energy. (3)

As we know, vitamin K2 is one of the most important nutrients that is greatly lacking in the American diet. (7) Vitamin K2 is a product of bacterial fermentation, so kefir is a likely a good source of this nutrient, especially if made with milk from pastured animals. (8) Vitamin K2 plays a key role in calcium metabolism, where it is used to deposit calcium in appropriate locations, such as in the bones and teeth, and prevent it from depositing in locations where it does not belong, such as the soft tissues and the arteries. (9) Since kefir is high in calcium and phosphorus and also contains vitamin K2, drinking kefir is likely beneficial to bone health, providing the essential minerals needed for bone growth as well as the vitamin K2 needed to effectively deposit those minerals in the bone.

Very interesting, and timely because I have [yet another] post on K2 in draft.

In the meantime, what’s all this about? Here’s a picture that ought to give a clue. 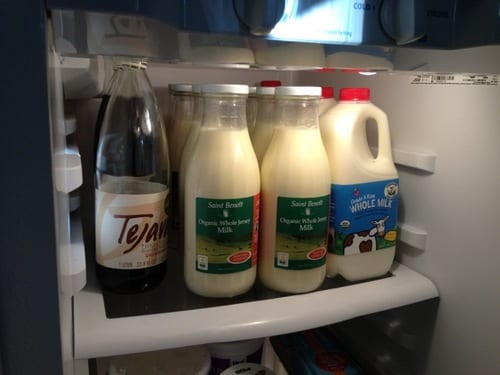 Got an email from a reader the other day I found intriguing. It’s about a farmer who went on a raw milk diet. Basically, it’s a half gallon of raw milk per day with one pint of it as kefir, and a pint of kombucha. The results he reports are huge energy, great feelings of well being, and 33 pounds shed in six weeks.

I figured that was enough info to give it a try and report back. I’ll probably be reporting weekly results via the newsletter, then an all-in-one post here in a month or so. So far, everything I’ve tried lately has worked: potato diet, safe starches (less protein portions), plain jane paleo without tons of added fat. So this is just checking to see if another tool works too.

In terms of product, I’ve ordered some live (not desiccated) kefir grains that should arrive in a day or so. Those glass bottles from Saint Benoit will make perfect containers. Kefir is damn easy and quick to make and doing it with grains (not a powder starter culture) is the way to go, and they’re indefinitely reusable. Also, I can make it will full fat, raw milk. All the brands I’ve seen on the shelves are fat free or low fat. Takes 24-48 hours to ferment. Strain, transfer grains to your next batch, you’re done. Kombucha on the other hand takes 7-10 days, which means you have to make large batches. For now, that’s a PITA I just don’t want to undertake. GT’s looks like they pay attention to their quality.