Yesterday morning I already knew I was doing pork chops sous vide for six that night. I just didn’t know which recipe to use. I’ve done them SV different ways before (here and here and here), but wanted to do something different.

…Way back when Drs. Mike & Mary Dan Eades unveiled the new SousVide Supreme at The California Culinary Academy in San Francisco, I was lucky to be on hand to share Chef Heston Blumenthal’s creations (pics here) with Dr. Mike and Tim Ferriss, while Dr. Mary Dan was in the kitchen assisting the chef and sous chefs. I still remember Mike telling me that he got started on this whole sous vide deal “in search of the perfect pork chop.” Indeed. In my use of the SVS over the years, it’s the cheaper things (pork, chicken, salmon) where it excels the most.

So, I just chatted Mike up on Twitter and he pointed me to this recipe on the SVS website (they have an extensive array of SVS recipes). He also suggested Apple Cider Pork Chops, but I’ll save that one for next time. Hey, using this one gave me a good excuse to buy a bottle of Jack. The recipe is also on Chef James Briscione’s website with some preparation pics and the finished product.

I was off and running. Having done thin pork chops at 141F in the SVS before and getting pink moist meat, I opted for 140F and had it in the bath for 5 1/2 hours. First, I had to get the pork. I found these Niman Ranch Naturals at the butcher counter at Lunardi’s, one of the high end markets here in the South Bay and just a few minutes away. 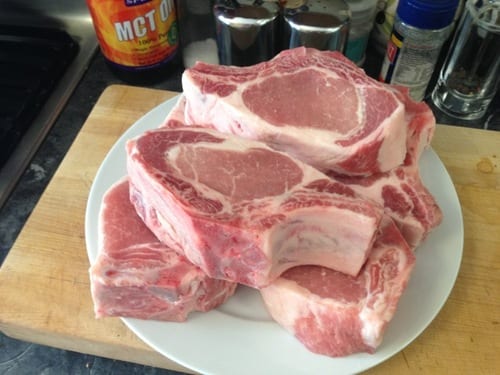 The first change I did to the recipe was to use Red Mill Gluten Free Flour (garbanzo bean flour, potato starch, tapioca flour, white sorghum flour, fava bean flour). The downside to this is it tends to blacken more than brown, which carries through the whole recipe so my sauce at the end is significantly darker. I doubt it makes a difference in taste. 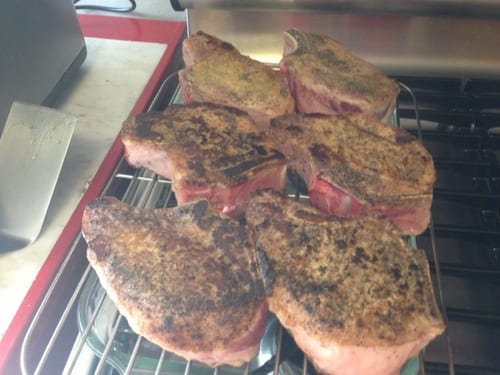 I opted for the high oleic sunflower oil (completely different from standard sunflower oil, with only 4% total PUFA) because its high heat tolerance is really unmatched. 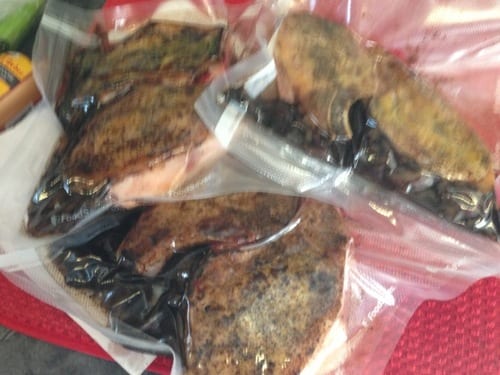 All sealed up, along with the onion, prune & JD goodies

I was able to use the dry setting on my vacuum sealer and didn’t have any liquid make it all the way to the opening before it sealed. I always double seal my bags, top & bottom. You never know when there’s going to be just the tiniest little opening to allow water into the bag and ruin food.

Another thing with SV cooking is that it doesn’t pull the moisture out of the proteins. This is why, for example, you can do a pork belly for days and the fat remains intact, just soft and creamy, not liquified. As such, at the end there was not a significant amount of juice in the bags so I ended up adding about a cup of chicken stock to the mixture. My other change to the recipe is that instead of using heavy cream at the end, I used about a half tub of crème fraîche.

To go along with, I chose fingerling potatoes that I tossed in a wok with half coconut oil and red palm oil (the latter which imparted a nice color to the potatoes) and sea salt. Those went in the oven all face down, skin up, on a baking sheet at 500F for about 20 minutes while I finished the chops on the gas grill on high—a few minutes per side with the lid open (no cooking, just searing)—and completed the sauce. 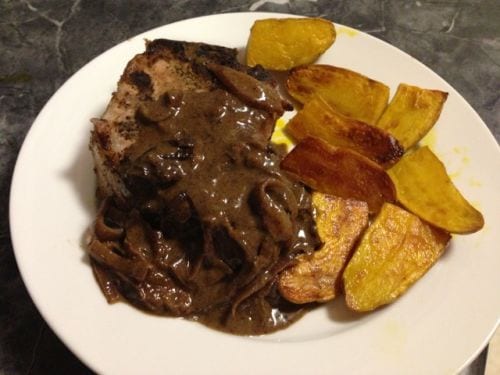 I was really blown away at just how good it was, especially with the hint of cumin that comes all the way through. I seriously could have eaten a whole second plate like that. I use straight edge, not cerated steak knives, but you didn’t even need to slice, just push down. The pork was moist, tender, all the fat succulent, and the texture of the whiter portions of the meat was of an indescribable nature. The SVS is the ultimate way to do any sort of white meat. 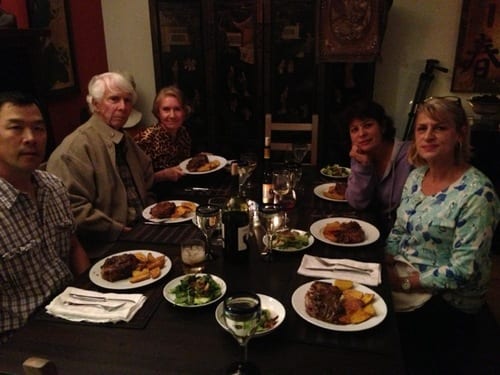 Didn’t get a closeup of the salad Julie put together but in addition to the greens, it had green apples, currants, bacon bits and blue cheese in a very light tossing of EVOO with a balsamic reduction drizzled on top.

For dessert, I made real Orange Julius smoothies with fresh squeezed Valencia oranges, raw whole milk and pastured raw eggs & added yolks. I used half the sugar called for in the recipe. Dammed modern ‘fraidy-cat society. Every recipe I found for orange julius omitted the raw eggs. You actually have to search ‘orange julius raw egg’ to have a real recipe show up on the first page of results.

I’ve been putting raw eggs in blended stuff all my life. Never, ever had a problem, nor anyone I know. I also make caesar dressing the way it’s supposed to be made.