I’ve come full circle on a lot of things lately. More disciplined, motivated, and nose to grindstone in a fun way than in a long time. Way back, in terms of diet & exercise, my routine was LC-Paleoish diet; 1-2, 24-30 hour fasts per week; 2, 30-minute fasted workouts per week (varied weight, plyo, Xfit)…and that was about it. Dairy consumption was pretty much butter, a little cheese and cream now & then. Now this. 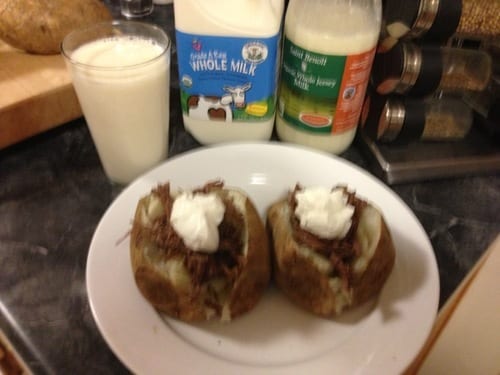 Blurry Image; details of the meal later in the post

Potatoes were an indulgence. Milk, an indulgence. But I just never really understood why, so much (milk posts / potato posts). They are real and nutritious foods. Folks can talk all they want about teh “toxins” and teh “anti-nutrients” and teh what-tever. But at the end of the day, we live in a world of toxins, anti-nutrients, bacteria (3 pounds—10s of trillions of them in and on your body right now), viruses and a host of other things…and people sweat saponins in potatoes and IGFs in dairy? Really? A break gimme, please. In fact, I don’t even really believe it matters marginally a whole lot whether you’re eating factory farmed or the most pristine pastured, grassfed organic—so long as your diet is plentiful of Real Food. Real vs. processed in boxes and bags loaded with grains, sugar, and vegetable/seed oils. There’s where 90% of your marginal utility is going to come from.

Pareto, man. 80/20. Or 90/10, or whatever you like and are comfortable with; but beyond that you’re surely going to be hitting the tar pit of diminishing returns in any added cost/ marginal benefit analysis. And that’s going to be a bummer; and for a great many, perhaps most, people are going to get sick & tired of it and just go back to frozen dinners in boxes: because it’s easier. People talk about “sustainability” a lot. Well, unless you’re a true zealot that gets off on being a true zealot, how sustainable is zealotry in dietary terms when it always takes far more time, effort & money? In the end, the one that doesn’t sweat the small stuff is leading the sustainable “tortoise” lifestyle and will do a lot better than the faddish, zealot “hairs” in the long run.

Seen on Twitter earlier today: I’ve been a vegan for 3 minutes and the best part has been reminding people I’m a vegan.

…Here, you have the time for a real education on all this toxin, anti-nutrient stuff and what a mountain of a molehill much of it is, by someone who generally supports a paleo diet, but has the misfortune of having earned Harvard PhDs in both organic and inorganic chemistry? Listen or read the transcript of this Chris Kresser podcast with Mat “The Kraken” Lalonde: What Science Really Says About the Paleo Diet – With Mat Lalonde. There’s tons of stuff covering the gamut of what you’ve probably heard about all the nasties in various foods. Guess what? A lot of it is either not true (phytic acid, for example) or way overblown. Mat himself admits to having harbored some of these myths for a time. A couple of excepts, on milk in particular (there’s a lot more on dairy in general), and potatoes.

Mat Lalonde: That’s right. Now, that’s very different than saying, well, nobody should eat this because we’ve never eaten these foods in the past. And it is a very different statement, and it forces people to think about themselves, which is what you do all the time. It’s like, OK, where do I sit on this spectrum? What do I tolerate and what do I not tolerate?

Mat Lalonde: Yeah, and again it assumes that you can’t possibly discover a better source of food, right? It’s this ridiculous assumption that that can’t be the case. What if the milk of another animal is this great food that we haven’t tapped to in the past?

Mat Lalonde: And if you look at the potatoes — I think Stephan Guyenet had a really good post on that — there’s only one species that has a significant amount of these saponins in the flesh, and it’s the Snowden potato. And it turns out the Snowden is not available on the shelves. It goes directly to making potato chips.

Mat Lalonde: That’s right. So if you look at a potato, it has a decent amount of nutrient density. It actually has complete protein for plant matter. That’s important to vegetarians. The same is true of the sweet potato varieties, even though they’re completely different. I know that they’re not the same species. It’s actually good food, and it’s just starch, which will decompose into glucose. There’s no fructose there. So I don’t see the problem. Like, have your potatoes. Just don’t eat the skin if you’re worried about it. But the people that make a big fuss about that, again, I think you’re losing some credibility here because people are, like, really? Are you serious?

Chris Kresser: Yeah, and of course, we want to be clear here. That doesn’t mean that there may not be other reasons not to eat potatoes. Like, for example, some people are sensitive to nightshades and they just don’t do well with potatoes, but that’s a far cry from saying that nobody should eat them.

Well, I ate two large baked potatoes and I felt just fine. And I drank two pints of whole milk and I felt just fine. And altogether, I felt excellent eating it all after a 20-minute session of the Body by Science ”Big-5,” which I make a Big-6 by adding deadlifts as my first exercise. I do the workout in my own style, sometimes one set, sometimes two, but usually some combination of super slow reps, static holds at varied points of extension and retraction and some reps at a regular pace (except for the DLs). I typically take a few minutes between exercises. In all, 20-minutes per week. 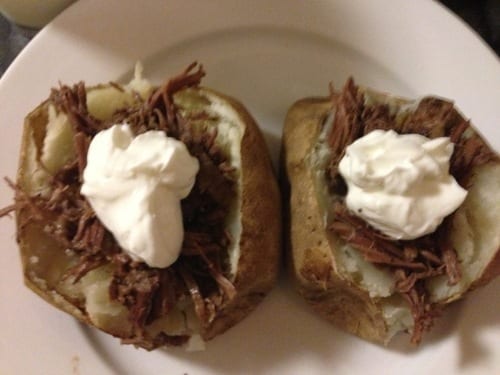 I recorded a podcast interview this morning as a guest of Jonathan Bailor (The Smarter Science of Slim) and unlike al of the other podcasts I’ve done, this focussed on the gym for the majority of the time. More details when it comes out in a couple of weeks, but one thing we talked about is perceptions people have about workouts; the perceived need of being athletic, when being “athletic” is not necessarily healthy and has significant risk of injury costs associated with it. That is to say, it’s really hard to wrap your mind around the notion that 20 minutes per week in the way I do it is very likely optimal for someone who’s not training to some athletic goal typically involving competition and hopefully, payment to provide some benefit in exchange for the risk. 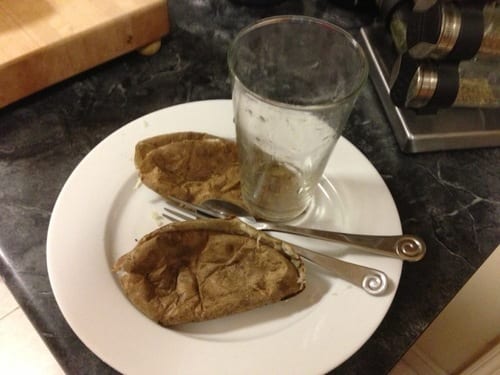 Killed it, along with 2 pints of the whole milk

In the end, my body tells me that the 20 minutes I did was plenty sufficient and probably a lot more efficient and safe that some of the Plyo and Xfit stuff I used to do, jumping on boxes, running up stairs with a sandbag on my back, wringing myself out to the point of no fun. Hey, if that’s your thing, more power to you. No beef. And some people just like the gym enviro. I get that, too. I work out at a swim & racket club, so other days I just go and enjoy the sauna, jacuzzi, and pools. No stress, and in an environment that’s uplifting and wholesome.

Here’s another way to use potatoes, especially when you want less potato and more meat (message: don’t do the same thing all the time—duh). 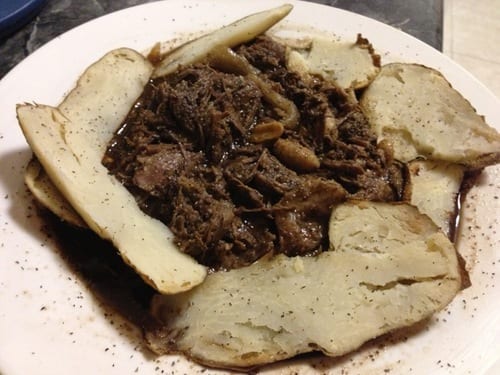 I bake lots of potatoes at once. Put them in the oven, turn it on at 400F, leave for 1:15 (no need to preheat). Then I put them in the fridge to form resistant starch, and the next day, just take them out and put them on the countertop for use. They’ll keep for a couple of weeks easy, probably longer. I don’t usually even reheat them. In the case above, I just took a jumbo and sliced off skin and flesh, as you see, leaving a cylinder of plain potato that can go in the fridge to use later, like quickly frying up with eggs (fried potatoes are really quick when working with baked potato).

Then you just eat it. And yes, things are going very well. Slow & steady. I’ll gain 2-3 pounds in the 2-3 days after a workout and by the next workout a week later, just a bit under where I was a week before. I’m just going to keep doing that over and over.

Update: For an actual example of how this works each time, from Wednesday before my workout, this big meal and eating big generally on Thursday, I had gained exactly 2 pounds by Friday morning before writing this post. This morning, Saturday, I’m down 4 pounds in one day. Thats the biggest drop yet, but I’m a net 2 down in only three days since the workout, and I didn’t even fast (I skip a meal now and then is all). Of course, water, fat & lean all play a role, but I’m pretty sure that I’m not losing any lean.