Why There is No “Paleo Diet”

There’s only a million of them. 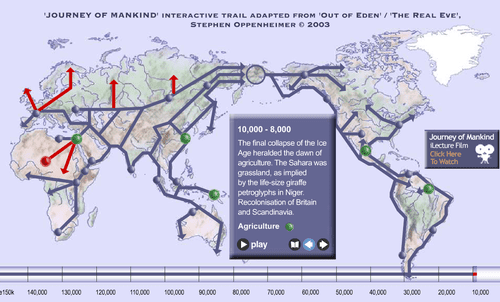 This was provided by commenter Charles whom I believe I’ve had “words” with in the past, but no matter. I’m a complete whore when it comes to adding real value in comments. And, he’d already done so with a couple of links to lactase persistence.

It was way way back when I coined the phrase: “”paleo is everything from equator to arctic, sea level to 16,000 feet, and everything in between.” More recently, not to persist in being boring and saying the same thing over and over, I say: “Did your ancestors turn left or right out of Africa, and then, after a time, did they go north or south?” The only thing common for everyone is real food. There is no one “paleo Diet.””

See the whole interactive presentation here. It has many layers of discovery (don’t ignore the clickable links, as well as videos you can purchase & download).

Lactase persistence is the most striking example of rapid evolution before our eyes. While the actual mutation probably happened around 20,000 years ago, it is only in the last 8,000 years that it really gained a foothold and is likely at the root of many a conquest where you can derive far more calories over time from an animal you milk like a taxpayer, than you can by killing and eating them. Around 35% of the world’s population can now tolerate milk and it’s growing rapidly. I’d quote chapter & verse, but the Bible assumed milk was suitable for one & all. Perhaps Christianity tracks with lactase persistence?

…This is why, in terms of practical politics, top-down authoritarian democracy of domesticated human animals in the Zoo Human is so much more effective than a Stalinesque sort of brutal, murderous totalitarianism. “Don’t kill them. Milk ’em dry, over & over & over over a lifetime. See? Calories count.