Xenophobia is a dislike or fear of people from other countries or of that which is perceived to be foreign or strange. Some definitions suggest xenophobia as arising from irrationality or unreason. It comes from the Greek words ξένος (xenos), meaning “stranger,” “foreigner,” and φόβος (phobos), meaning “fear.”

Xenophobia can manifest itself in many ways involving the relations and perceptions of an ingroup towards an outgroup, including a fear of losing identity, suspicion of its activities, aggression, and desire to eliminate its presence to secure a presumed purity. Xenophobia can also be exhibited in the form of an “uncritical exaltation of another culture” in which a culture is ascribed “an unreal, stereotyped and exotic quality”.

So I’ve dubbed what I’m about to show you “neo-xenophobia.” I suppose plain racism would work too, but the guy actually uses a black African tribe as an example for whites to follow. From where do these ideas come from? Echo chambers, I suspect, but I’ll close with that. In the meantime, comments.

I’m going to preface this with an image. 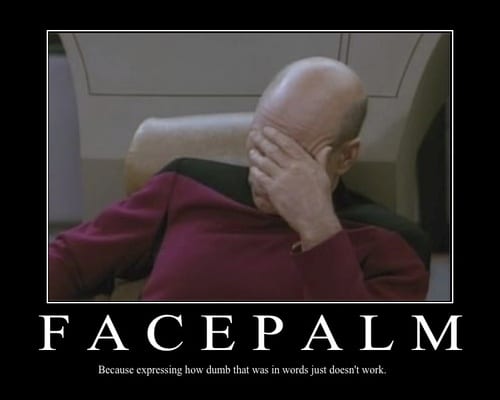 Let me take the opportunity to introduce you to a new Internet meme I’ve come up with: JLPF — Jean Luc Picard Facepalm. Use it far & wide, so everyone can save some time.

Women in the workplace spells doom…

In other words “a tribe” has an interest in treating it’s woman like the reproductive goddesses that they are.

Western man will be extinct, in the blink of an eye, all because women are free to ride that alpha-cock carousal, thus breeding out the beta-males that make an advanced industrial society possible.

And an excerpt from a follow-on comment of his.

From an evolutionary point of view this is interesting, no? Do white people who do care about this trend have a right to attempt to reverse this course?

I went back & forth with the commenter a little and frankly, I had never encountered this form of xenophobia before (masturbation, homosexuality, women in the workplace), so I honestly have no idea if it’s a one-off lunatic fringe or represents some neo-“thinking” on the part of some group with season tickets to an echo chamber. Whatever the case, ideas are ideas no matter how many people hold them and if one person can hold them—who’s at least competent enough to get an Internet account, get on, look up stuff and post comments—then certainly, many people can hold them. I like stuff out in the open. The worst thing that ever happened to the Neo Nazis was the Internet, where their ridiculous, laughable, ignorant screeds were out in the open instead of on badly mimeographed pamphlets.

Transgendered / sexually atypical people exist in hunter gatherer tribes. Additionally, gendered behavior and sexual difference is not cultural or social phenomenon, it is biologically real. Scientists can alter the instinctual mating behavior of animals by modulating endocrine environment prenatally… this is an approximation of human homosexuality. Homosexual people often show hallmarks of an endocrine milieu that is atypical for their sex, such as 2d:4d finger length ratio (this reflects prenatal testosterone), or the development of inner ear (different between males/females).

Whether or not the Nngandu have a name for homosexuality and view it as “seeking children” is irrelevant to the biological reality that sexual drive and desire and instinctual sexual behaviors is biologically immutable, the product of sex steroid milieu prior and/or shortly after birth.

Rather like thirst or appetite, one’s sexual preferences and instinctual gendered behavior is not impressed upon us by culture or society.

I’m not a Nngandu tribe expert so I have no idea how full of shit or not is this article, but one thing I do know for a fact is their attitudes are not ubiquitous; you can also find other hunter gatherer people with rather different sexual attitudes, permissive of gendered difference and non-reproductive sexual expression.

In other words, homosexuality and masturbation are not evil jew leftist conspiracy to destroy the white race: sorry buddy. They occur naturally and are biologically real drives; in the scientific world (not the fake jesus based one you prefer) a great deal is known from animal research how various sex steroids affect brain development prenatally producing gender specific behavior and sexual drives. In human beings who have endocrinopathies affecting sex steroids, gender identification and sexual behavior can be atypical for karyotype/biological sex far greater than chance (21-hydroxylase CAH in an xx fetus, or 17-alpha hydroxylase in an xy fetus for example).

These hormones do not just affect the development of primary sex characteristics (genetalia) but the brain is ALSO a primary sex organ, but an invisible one. Surprise surprise male and female brains develop quite differently prenatally/early postnatal due to the very different concentrations of various sex steroids. It is reasonably possible for the external genetalia to be “normal” for sex, but the brain may have developed sexually atypically enough to create a kind of third sex, with preference for same sex or gendered behavior more like opposite sex or a range of outcomes.

So much blinded-me-with-science awesome there, I commented in excerpts that begin here.

I’ll add one edited excerpt from one of my own previous comments in the thread.

“Do white people who do care about this trend have a right to attempt to reverse this course?”

I have no problem—though I think it short-sighted and ignorant—with saying: hey, crackers, don’t masturbate—”spill your seed” in Biblical terms—drop them puppies into a vagina and let ‘em cook.

Otherwise, I see no voluntary solution to your perceived dilemma.

I’ve said it a bunch of times going back years: in the end, we’re all brown. That is, in a modern society with quick migration that doesn’t take generations as it used to, skin color is going to homogenize and I figure if you mix everything together, you get brown.

I don’t care about skin color. I do care about culture, but even that is a homogenizing trend over a couple of thousand years, now. Why do you think you like to go to Chinatown, or eat Italian, Japanese or Thai…in America, Land of the Free and Home of Whitey? What will be the dominant meta-culture in the end? I don’t know but as America has been the most attractive place to migrate to for a couple of centuries, I’m sure our own meta-culture (that absorbs and assimilates other cultures quite peacefully and easily) will have a major stake. OTOH, we’re not perfect, so I’m sure there are still good practices (automatic ideas) from other cultures we can still absorb.

Wonderful, in my view.

…Echo chambers exist all around us. Some are strong, some weak, some just innocent clubs. The Internet is a powerful force in keeping echo chambers well trimmed, so that the grass doesn’t get out of hand.

What the Internet does is to put a revolving door on the chambers. That makes the echo chamber a potentially valuable tool in the ever evolving self-education of the individual—billions of individuals. So, long live the echo chamber, but confront the ideas they produce.