First 8 Days on the Raw Milk, Kefir, and Kombucha Diet
Land of the Free and Home of The Totally Batshit Crazy Update

You know the drill.

Got several hudred new Newsletter subscribers since that post right after the email last night and didn’t even mind that a few nefarious souls (seven) signed up, got the Newsletter link, then unsubscribed and reported me to their ISPs as a spammer. Onward.

So just about a little more than a week ago I knew nothing about kefir. As I do, and as I admonish, Google is the world at your fingertips. Within an hour, I knew a lot. I knew you could start it from other kefir, there are powder starters, liquid starters (just kefir, probably) and grains. And, there are desiccated grains and fresh. The former requires you reconstitute them and it takes a week. I wanted fresh ones, because I don’t trust that they reconstitute fully.

I ordered from someone: live raw milk kefir grains (I’m still mystified as to how one forms them from primordial nothings—but I wasn’t searching for that—and if it turns out God created them I’m gonna be pissed).

Here’s what I got: 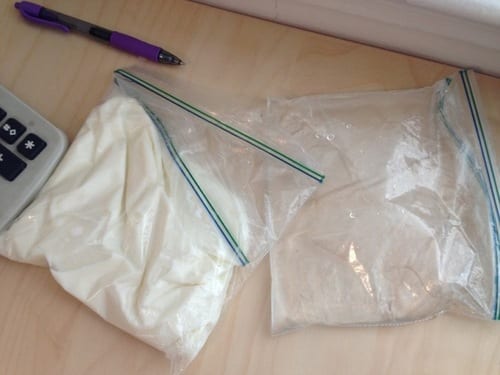 I was scratching my head.

Zero instructions. Just a moist box in USPS with a bag of milk and a bag of water (the water, to fill the void). And I laughed. “I just got scammed for $9.95 plus shipping and handling!” Perfect! I wanted to fire off an email admonishing the vedor to go with a $24.99 price point. Half the work, double the return.

So it sat there for a while. Then, after my amusement at the situation turned to astonishment at why someone would go to the trouble, I went back to the website. “1 tablespoon, enough for a whole quart.” I fingered the bag, sitting right there next to where I’m typing. And I felt………GHTs.

…GHTs are officially known as “Gelatinous Hard Things”…a term coined in the Admiral’s Mess of the US Seventh Fleet Staff, and I was there and a part of it. All the super cool, loved and adored mess stewards back in those ’80s were part of the PEP (Philippine Enlistment Program) where since the very early 1900’s, the US Navy enlisted X number of Filipinos every year without citizenship or other documentation (it was a road to citizenship, immigration, and establishing family and roots in the US). As an officer, many of these young men were my favorites. They uniformly did very well and outcompeted whiteys in performance regularly. (I just made a note to blog about specifics in my Lifestyle & Motivation category soon.)

What it was, those GHTs, I believe, was Gulaman in coconut milk, served as a dessert. None of us ever really asked and there was no Google. It was GHTs to us.

…So back from the massive diversion there, let’s just pour that whole bag into a quart glass bottle, fill it up with raw milk, cover it with a coffee filter—twisted & tightened for elements of specific style—and wait a day.

I put it on top of the refrigerator.

I’d read lots of stuff about warm & light vs. cool & dark, but this is bacteria and yeast. Warm & light, for me. Thirty hours later, I was like this:

I think fermentation in general is just too cool. And as another aside, I absolutely loath the uniquely American proclivity of refrigerating fucking everything; and immediately; and don’t even get me started on fucking tomatoes which ought never, ever experience cold (eat a cherry tomato hot from the sun…). I realized this when living in France and noticing that the French store their cheeses covered, in the cupboard—rarely the fridge. 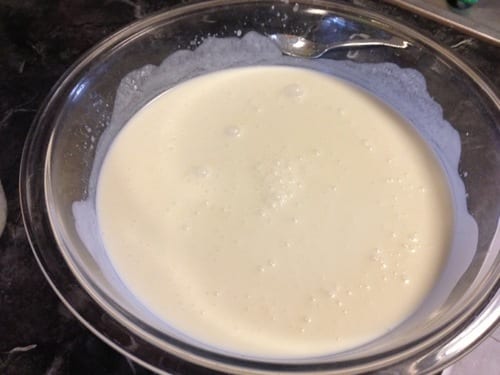 I’m not going to go through a recipe because there are a million of them and if I was to choose, go with MAS, just because I haven’t been to Seattle in almost 30 years—but was there a dozen times in late 1983 / early ’84 and have a private affinity for the place. Or, I like Michael a lot. Take your pick.

The pic above was right after I took the stick blender to it after the straining. It’s a very useful tool for this application.

I’m a self experimenter always and so I wanted to change things up for batch #2. I’d gotten an email from Brent Pottenger of AHS Founder fame telling me that goat milk kefir was the bomb. Her’s part of a comment response to someone about goat milk kefir (edited slightly).

So I made my first batch of kefir from ready raw milk grains I got via the internet. Just a tablespoon in a ziplock baggie of raw milk. No need to rehydrate, wait a week, etc. Worked like a charm.

First batch was 100% organic raw milk from Organic Pastures here in CA, which I can get easily from Lunardi’s 5-min away in 2 directions. It was great, pungent, sour. Reminded me of the love my dad and grandfather imparted in me for buttermilk (I’ll never forget the time, in the late 60s, maybe early 70s, when my dad and grandfather (maternal) stopped at a market for the express purpose of getting buttermilk, and they drank it in the parking lot!).

I always like to experiment so 2nd batch was 25% minimal pasteurized goat milk cream top, 25% minimal pasteurized 100% grassfed organic Jersey from Saint Benoit (the best tasting cows milk on Earth), and 50% of the same raw milk. Way better in terms of creaminess, lightness of curds, etc. My homemade cow milk kefir tends to separate into curds & whey in the fridge, but less so with this.

In the meantime, I got some goat milk kefir from WF and I’m really sold on it. I highly prefer the taste & texture of good cow milk to goat milk (we actually had a milk producing goat when I was a kid, and so did neighbors—so while I have milked many goats, never a cow). But I did not like the taste of raw goat milk or, rather, way preferred cow. My dad is the same way. We had friends who had both one cow and some goats and we got both goat & cow milk. But goat kefir is far superior to cow in taste & texture in my opinion.

….Just had a thought. What would goat cream butter be like? I love goat cheese. When I lived in France, one of my favorites was the log, and you let it sit out and get pungent. A layer of really strong “mucous” forms between the skin of the log and the harder, cheesy part in between. It can sting your mouth it’s so strong; and therefore, I love it.

It was in response to his comment about the superiority of the fat profile and composition of goat’s milk for humans.

OK, I didn’t give you a step-by-step recipe with pictures. A million out there. Get fresh grains and go for it. Critically visit MAS’s link. All you need.

CHESS EXPERT IN A WEEK!!!

Alright, so how do you equally get to be a chess expert in a week? Before you click away or close your browser, wouldn’t it be cool to easily beat 99%+ of people in the world who know the rules? If so, then read on and you can find out how. It does not take much time; rather, it takes a little specific focus (I’ll have to teach this to Tim Ferriss, as this is right up his alley).

If you’re still reading, here’s my light credentials. In High School I got the bug. Didn’t take much time, once serious, to beat everyone in my circle all the time, every time, adults and peers alike (it was cool to demolish teachers and church elders every single time). The computer appliances were just coming out (game shops had the first models) and I could beat them easily. I began playing postal chess (moves via a 9c postcard, back in the day), six games going at once. Played in tournaments and got into speed chess, which sharpens you like crazy. …About a year ago maybe, I put out the word on Twitter and Facebook to play Chess with Friends and went about 60-0.

Now I’m not writing this actually to teach you to be a chess expert in a week, though if you have such esoteric aspirations this will work. Otherwise, for the rest, it’s but an example of how to form a method first, act later—in whatever you do—and get authoritative very quickly.

So, what’s the worst way to learn to be a chess expert in a week?

Easy: play people as bad and incompetent as you. You’ll both remain bad and incompetent players. OK, so you need to play people far better than you. Easy. That applies to everything. But good chess players are rare, very rare. It’s geek elite. You can join a local club, get on the Internet—all effective—but you’ll have to contend with BS and that takes time. So, how did I manage this in 1977/78?

I bought myself a load of chess books written by the masters and grandmasters (over 20 of them). These were good and effective books. Why? Same reason a good cookbook can teach you to be a good cook and to quickly get to making your own recipes. It doesn’t go on and on with endless text on principles and methods and techniques and so on. It has a bunch of recipes. Those chess books had a bunch of games, hundreds of games. And just like a recipe, you site there, move each piece according to the recipe and make sure you understand why that master move was made—bonus when you understand how a lowly pawn advance just radically changed the balance of power and the game has become that mover’s game to lose.

Got it? Alright, go be a competent chess player and offer your beaten opponent some fresh kefir that you made yourself, as a friendly gesture of consolation.