[Note: I just discovered that Sean Abbott of Prague Stepchild got the jump on me in terms of the “cleverness” of the fantasy of Paleofantasy.]

Paul Jaminet put up a good post about the book: Paleofantasy and the State of Ancestral Science. I’m not afraid of the notion that what appears at first to be a slam of Paleo may turn out to be a help, overall.

I’d already dealt with some of Marlene Zuk’s proclamations a couple of times. There are other articles as well, and I’ve read a few reviews, both positive & negative.

Anyway, the main thrust of my post is to elaborate on how the book is a fantasy about what the so-called “Paleofantasy” is. Or, to put it another way: we’re on it. We have been on it, for years. I think John Durant put it pretty well in a tweet as he was live tweeting while reading the book. 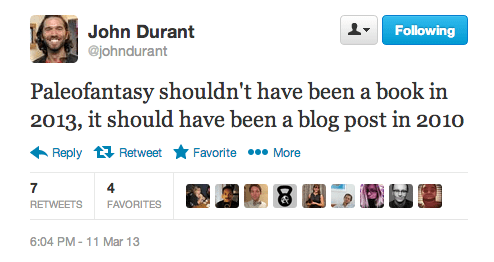 See, discussions and arguments over everything to do with paleo—what’s good or bad, better or best—are the subject of thousands upon thousands of blog comments and forum postings here and elsewhere. And it’s been that way for a long time now. While the initial popularity that began back in 2007 was pretty “bright eyed” on the part of myself & others, it didn’t take very long for people to begin saying “wait a minute” about a lot of assumptions. For instance, I was pointing out in at least 2008 that the Kitavans and others kinda falsify the notion that a paleo diet is necessarily low in carbohydrate.

In early 2010, three years ago, in a post called “Paleo Fear of Potatoes,” I wrote this:

Got a lot of heat for that, but we moved on and far as I can tell there’s quite a few people who not only incorporate sweet potatoes, but white ones as well. Progress. And dairy? Hell, there’s always been dairy in some form (usually the fat factions). Milk has really been the only super questionable thing, yet there are a lot of “Paleos” like myself who use it more and more, where it was considered an indulgence before. There’s probably no dietary group on Earth that debates the merits or pitfalls of milk (and even other dairy) more than Paleos.

So what’s really the most paleo about the whole deal? That we’re figuring it out for ourselves as we go along, that’s what. And yea, some things end up being ridiculous in retrospect—like bloodletting…no, uh, wait, it was credentialed physicians who did that. I don’t know, perhaps Zuk, being an academic, is rubbed the wrong way by people taking more stock in their own experience than in what they are admonished to do by varied interests, authorities and conventional wisdom all around them—conventional wisdom that might someday be as ridiculous as bloodletting.

There seems to be this attitude that “you’re no scientist,” no matter how rigorous your self experiments. Not even worth posting results on your blog or in someone’s blog comments. If you aren’t fulfilling your dietary requirements based on Randomized Controlled Trials, you’re hopelessly lost. Watch, even Robb Wolf thinks RCTs are completely flawless 10,000% percent of the time, with absolutely zero room for error. Furthermore, every RCT ever done in the history of mankind began with a pristine hypotheses. Absolutely none of them ever were deemed ridiculous in the luxury of hindsight. And what’s more, none of them have ever been found to be compromised by various agendas, biases, moneyed interests, or anything of the sort.

Finally, when you think about things from an evolutionary perspective and then make a prediction about how things might go for you in terms of health outcomes, fat loss, or lean gains, should you engage some self-experiment, you have every incentive to completely lie and fool yourself, right? Trust the Real Science (TM) instead. Trust me. They’re looking out for you! Who do you think you are, anyway?

So, uh, yea. Marlene? That our fruits, vegetables and farmed meats aren’t precisely what was available to Paleoman is so 2010, y’know? But I also know this: what we do have in terms of meat, fish, fowl, vegetables, fruits and nuts is absolutely as close to paleo as we can get. They didn’t have Hot Pockets, Pop-Tarts, pizza, burgers or Coca-Cola. And they could not possibly have consumed much in the way of “hearthealthywholegrains.” And, even if…IF…we were well adapted to grains, it’s still very poor nutrition calorie for calorie when put against any animal food.

Oh yea, and that bit about rapid evolution? Well, when did that 10,000 Year Explosion thingy come out that everyone in Paleofantasyland was talking about? …It’s so whenever that was. And incidentally, rapid evolution in the Neolithic is actually the strongest evolutionary reason to embrace paleo as a framework from which to begin to make the likely healthiest food choices. Read that again. I get the sense your position is that since evolution has been rapid in the Neolithic, that’s it’s pure paleofantasy to assume we’ll be better off healthwise to revert to the Paleo as close as we can.

This makes no sense to me. Evolution isn’t a function of time, it’s a function of stress, i.e., survival pressures—rapidly changing environments, food sources, etc. Looked around lately at the pervasive general girth? Seen stats on the most common diseases and killers now, compared with 100 years ago? Is it meat, fish, fowl, vegetables and fruits people prepare at home causing that, or Neolithic engineered foods?

So, with a few exceptions such as dairy for those who tolerate it (Real Food!), doesn’t it make sense to slide back the scale to a time when evolution was NOT happening rapidly, signifying that our dietary milieu and our adaptation to it was stable? Or, are you suggesting that people who don’t tolerate grans, legumes, sugar and processed foods (or dairy, still) take one for Team E? Just because evolution is progressing for the species as a whole doesn’t say anything about any particular individual—just as there are plenty who remain lactose intolerant because the persistence has not spread to everyone.

In the end, paleo is as simple as meat, fish, fowl, vegetables (including starchy ones), frits and nuts. Dairy if you tolerate it. How can anyone go wrong? So what’s the big deal already? From there, you can figure out whether your ancestors out of Africa went left or right and then, north or south, where they settled. You might find yourself more comfortable on a tropical diet of fruits, casava and speared fish than an Inuit diet of seal from nose to flipper. But no matter which ratios will work best for any individual, some range certainly will and it’s a priori that it’ll work better than pizza and a six-pack.

So yea, Marlene, there is a fantasy going on here, but it R not us.

One final thing. As Paul Jaminet mentioned in his post, there’s this video critique out there, Debunking the Paleo Diet: Christina Warinner at TEDxOU. I started to watch it (actually, at Paul’s suggestion a few days back), got irritated, clicked it off, heard it gets better, so went ahead and listened to the whole thing. Turns out it is a good critique in total. I think it’s very important to understand—as I quoted myself from three years ago, above—that essentially nothing, save perhaps seafood, is as it was in the paleo.

Just one quibble with that video then. At some point she says that we have not evolved any adaptations to eat animal flesh (only milk, i.e., lactase persistence) but that we have evolved many to deal with various plant matter. Uh, that’s easy. Chimps eat meat. I don’t know how far back our lineage of mammals have been able to eat and digest some meat, but it’s a looooong way back. Moreover, one might also argue that a large brain is an adaptation to meat eating.

…One that the vegetarians squander.

Update: I just got wind of a review by Miki Ben-Dor, Ph.D candidate at the department of Archaeology of Tel Aviv University. He researches the connection between human evolution and nutrition throughout human prehistory. Do check it out.

Update 2: Miki Ben-Dor has now put up a second post, this one having to do with the TEDx critique of the Paleo Diet by Christina Warinner. He is not as generally positive about it as Paul Jaminet and I were. As a professional archeologist, that carries substantial weight.