A Car vs. Dog Story With A Happy Ending 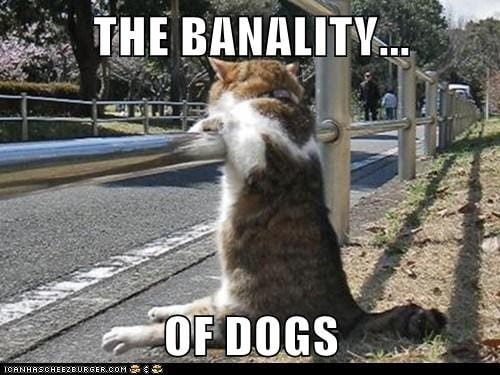 The Cat World of Evil

I’m sort of a geek when it comes to obscure references (too many standup routines and HBO shows by  Dennis Miller, I guess).

So for those who don’t get it, yet, that’s a reference to Hannah Arendt in the title of her 1963 work Eichmann in Jerusalem: A Report on the Banality of Evil. What it means:

Her thesis is that the great evils in history generally, and the Holocaust in particular, were not executed by fanatics or sociopaths, but by ordinary people who accepted the premises of their state and therefore participated with the view that their actions were normal.

Dogs chase cats—and other dogs too. It’s part of their raison d’etre. They accept all the premises by their nature—a banality. And yea, I created that meme. A Google search for “banality of dogs” turned up squat—non-sequitur and silly. Another banality? They don’t understand cars. Didn’t evolve with them. You’re their surrogate conscience and steward for that shortcoming. You created them.

…Beatrice and I headed out Thursday evening for dinner at Opa, a Greek Restaurant in Los Gatos. It was a wonderful, sunny, in-the-70s afternoon, making its traditional quotidien transition to dusk. While driving down the street, there were people in their front yards—and  small dog. I watched it to my immediate right, slowed down, watched for any sign of movement. It was about 200 yards further down the street when I caught a peripheral, sharp movement in the rear view mirror. I initially chalked it up to the setting sun playing tricks on me; then I saw the body rolling under the car.

“I think a car just hit that dog!” I said to Beatrice.

“Turn around! We have to go back!”

Not the time for asking questions, proffering objections. You do as you’re told; it’s only a 30-second delay before you’re on the same page anyway. …It was out of context. The dog was not the 15-pounder or brown-colored one I’d slowed for and watched like a hawk. It was grey and triple the size. In the minute it took to 180 and drive a few hundred yards back, six cars had stopped, blocking the road with emergency blinkers. There would be no other “first” responders. There would be no paramedics, no ambulance, no helicopter. And Samaritan Hospital—only a 5min walk away and the surrounding clinics, only steps away—is for voters only.

There would only be a bunch of anarchists who didn’t even know it, much less begin to appreciate the fact they they were acting, in that moment, in the very best display of humanity. We got to the scene.

“THAT’S LUCKCKCKCKY!” and that was Bea screeching it.

I stopped, she jumped out. I navigated the anarchist congestion to find a place to park. It took another minute for me to get there, on scene. Our next door-neighbor’s rescue dog—a 2-yr-old bundle of silly joy—Lucky, was surrounded by four humans. The blood, while not yet making its natural course to the gutter, was nonetheless bright red and abundant. One of the four kneeling humans was petting his head while keeping pressure with his second hand on the gash in his neck. The old lady who’d hit him, after being flagged down by an anarchist up the street—feelings of underserved guilt & shame getting the best of her—stood by, offering an anarchist prayer to a perceived higher authority.

Lucky had been living his carefree life running around in the elementary school park right across the street with the people he owns standing watch. Uncharacteristically, the gate on the chain link fence was open. Lucky saw the same dog I did, only seconds after I’d seen him.

The banality of dogs.

The blood looked very bad. “How can it be that bright, that red?” I wondered. He lay there as though in shock. Obvious shallow breathing, as his diaphragm was barely giving any sign of it. While there were no dangling body parts I feared the worser: internal injuries, the silent killer. At the moment I thought that, he slowly closed his eyes and I figured he was probably gone, but at least surrounded by the human attention that’s the basic bargain a dog’s life strikes. That’s anarchy too: clean slate, a balanced P&L in the end, amongst parties who’ve been striking a mutual bargain of win-win for perhaps 30,000 years.

From the time of the accident to when he was lifted by four guys, by means of a passerby’s beach towel—into the back of his owner’s car with the son attending to the need to apply pressure to the wound and speak encouragement—was perhaps 4 minutes.

A human could only have it so “Lucky” when anarchy is derided, misunderstood, dismissed in abject and cavalier ignorance. A human would have still been waiting on “first” responders, because that’s what everyone is supposed to do, such that credit can trickle up.

Lucky was at the nearest dog hospital within about 10 minutes of the incident. Bea was distraught, weepy, recounting how much Rotor and Nuke love Lucky and that they play with each other so often. I asked her if she really wanted to continue on, to the restaurant. Perhaps a cocktail was in order at any rate. We headed over, she gradually accepted the reality and assumed, as I, that the final bad news was in store for us later that evening.

We ordered. She had calamari and spinach salad and I, classic moussaka and a Greek salad. We barely ate any of it. Packed it up, paid the bill and as we drove north up Santa Cruz, which turns into Winchester, I suggested we continue on past the right turn on Lark to stop by the dog hospital. I didn’t know the exact location but suspected about where it was, so asked Bea to search the map app on her iPhone. She gave me her typically unsatisfactory navigation directions (I’m a former navigator, at sea, and I have my standards). But we got there.

Our neighbor’s car was not in the lot. Obvious. No hope, let’s get it over with. He’ll feel no pain. Beatrice went in and I expected her to come out in seconds, hands involuntarily hiding the shame of natural tears. But she didn’t come out right away. I shut off the car, went in myself. The news: critical condition, under observation, sedated. The people he owns were sent home to wait for news on Friday morning.

When we arrived home, Bea called the neighbors. No broken bones. Bruised heart & lungs. They had to evacuate his chest cavity of air—probably what was causing the very shallow breathing. Inconclusive on the neck wound. An operation for that was expected the next day.

The neighbors dropped by Friday evening. They hadn’t even known we had stopped by the doggie hospital and I think I saw a bit of choking up over that news. But importantly, Lucky had made marvelous progress; they didn’t have to operate as the wound was in a place with massive blood vessels, no damage to the spinal cord or vertebrae, so they just stapled him up to let nature take its rerouting course. They’d brought him to the hospital waiting room to see the people he owns, but the first thing he did was spot the ubiquitous waiting room cat. Growled; barked at it.

The banality of dogs.

He was expected back home for his more extended recovery yesterday. I haven’t seen him yet, and Beatrice headed out at 5am yesterday, with our two furry masters, for a week long-visit with her folks in SoCal.

…As a final note, the neighbors had to pay $600 to get Lucky evaluated. Once determined there was a chance, it was a deposit of $3,200 on further treatment. May seem like a lot and I have zero idea of the options available beyond euthanizing had they not been able to pay. What I do know is that a human would have been $50,000 minimum, and that’s just for the first hour. And while you don’t get to euthanize humans if a friend or loved one can’t pay, you still have highly trained nurses, technicians, veterinary docs and a surgeon on call 24/7. And it’s a nice, clean, well lighted place.

Why the enormous disparity in price? That’s easy. It’s the difference between an anarchist market and a highly State-regulated system of favors for rent-seeking human hospitals and insurance companies. Few institutions can resist those goodies. Far easier to do business via a list of mandated, approved, non-transparent “schedules for services”—that patient or customer has zero knowledge of—than to engage in an anarchist, human negotiation between interested parties.

Update: He’s home & well. Snapped this last night (Monday), 4 days since the accident. He’s not much interested in eating yet and his tail may need to be bobbed (appears to have been crushed by the tire). He’ll be just fine. 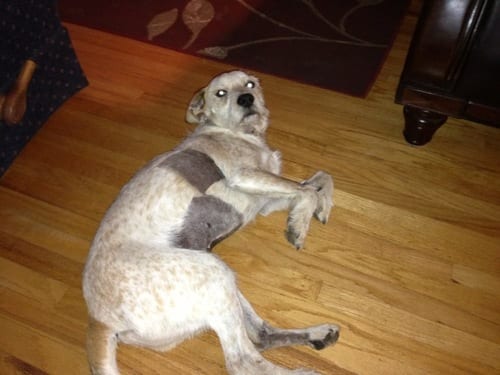