Somebody could make a career out of this

~ You’ve probably all heard of the 7-yr-old Baltimore kid, Josh Welch, who was suspended for a couple of days from the Park Elementary School for failing to chew his Pop-Tart into the shape of a mountain, instead ending up with the shape of a gun! To be on the safe side, the monkeys and morons—erroneously referred to as “teachers” and “administrators”—who run the top-down looney bin, have graciously offered counseling to other kids who may have been “upset” by the incident.

Actually, on second thought, it’s probably not a bad idea. I can very well imagine 7-yr-olds being somewhat upset to learn that they’ve been placed in the daily care and supervision of a pack of screeching baboons. Traumatizing.

…That young Josh tried for a mountain and failed, is both prescient and apropos. He succeeded beyond his wildest imagination—and he didn’t even start with a mole hill; just a pastry. Perhaps he can spend his suspension perfecting the craft of chewing and shaping a Pop-Tart and all his other foods into an AR-15 Assault Rifle! ….As for mashed potatoes at dinner, Richard Dreyfus is clearly his go-to guy on the ins-&-outs of mountain making—including success at the box office for a sci-fi film that inexplicably appeals to critics and Hollywood elite alike.

Well…the bright side in all of this is that we no longer have to wonder why Idaho attracts so many gun nuts. 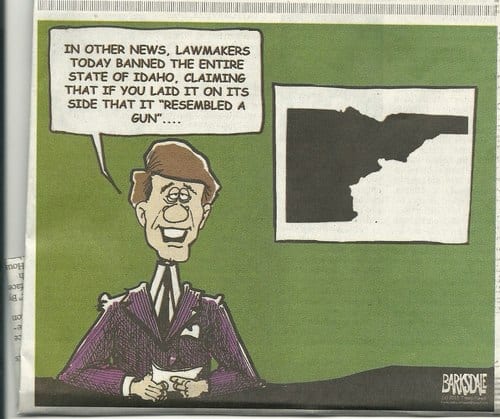 Your Own Private Idaho

~ Washington State schools, students and parents, not to be outdone….

A 6-year-old boy was suspended from the James McGee Elementary School, in Pasco, Washington, for talking about his toy Nerf guns with classmates. The Pasco School District decided to overturn the suspension on Thursday after speaking with the child’s parents.

On Feb. 28, Noah, a first-grader, was sent home after another student said she thought he had a gun with him, after he talked about his toy Nerf guns that his family had recently bought him during a vacation.

The young girl who had overheard Noah reportedly stated that she felt her “health and safety were threatened.” Noah was immediately suspended despite not actually having any toy gun with him. Noah’s father, Mike Aguirre, says he still punished his son for talking about the Nerf guns with classmates at school.

I don’t know about you, but I’m always immediately slain by any and all 6-yr-old girls who walk up to me and proclaim: “I feel that my health and safety are being threatened!” Gets me every time. Right there: there.

In terms of ramifications and fallout, this is potentially very bad news for the Kellogg Company. I mean, who can’t figure out what the next logical step is, in all this shenanigans? That’s right: suspension from school for talking about Pop-Tarts!

Obvious. In a world of Zero Tolerance, where we’d be bored to tears without the hilarious stories emanating from people in authority who can’t think—but can master Zero Tolerance as easily as a chimp can take a ride into low Earth orbit—upping the ante is just du jour. Thanks morons, by the way.

…So Kellogg & Co., you’d better get in front of this instanter. Offhand, I’m thinking Pop-Tarts pre-made into the shape of cute furry little teddy bears…and cats! don’t forget about cats; and every box could contain a short URL to a cat video! How cute, unthreatening…and the only counseling required will be for mindless obsessions. (Note to the marketing team: set up a charitable foundation that. 6-yr-old girls with trepidation over health and safety to the head of the line, of course.)

…And while you’re at it, think of the killing-two-birds-with-one-stone angle (metaphor!, metaphor!). For your South-American rural market, how about Pop-Tarts in the shape of The Virgin Mary! Think of the possibilities! Make sure to get a jump on inventories for red dyes. “Strawberry,” “Cherry,” “Blackberry” ahem, “flavors.” Get it? Holes, man. Holes. Where her eyes are. A little more engineering as to the viscous properties and thickening agents and you’ll have a filling that’s not to thin, just thick enough—Just Right! (Note to team: remember the cute furry teddy bears? Yea?! Goldilocks tie in, man, right there atcha—cross marketing potential, all that noise… Whoa, eh?) So we’re clear, right? Just a little squeeze, instant crying of blood that tastes sweet and delicious. But make sure you focus group the thing fist, for God’s sake (especially). You don’t want a flop on your hands. On the other hand, think of all the free advertising you’re getting now, and you know what they say about publicity. Yin-Yang, all that noise.

I have ideas, but it’s gonna cost you, Kellogg’s. Email on my about page. I await your anxious inquiry.

Not convinced, Kellogg? Well ha, you don’t have a dedicated cupcake division, do you? Bwahahahaha! School removes toy soldiers with guns from cupcakes, calls them ‘insensitive’. See? Don’t be foolish. Call me. We’ll do lunch.