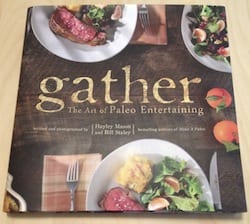 Gather: The Art of Paleo Entertaining

It would be silly of me to title this particular book review with anything fancy or clever, and I won’t even mention how their names could rhyme until the end. That’s because the title, in itself, is clever. Yep. It’s yet another paleo book—a cook book, again, too. To their credit, Hayley Mason and Bill Staley of The Primal Palate already did that once: Make it Paleo. I reviewed it here, two thumbs up.

I don’t do many book reviews. I get them all sent to me, but—sorry—I don’t review cookie cutters either, and in some ways that’s what it’s like for me. Pretty simple. But, knock yourselves out. Reviewing all the new paleo books would be a full time job in itself. Since their first go at it was pretty damn good, I pulled it from the stack and spent some time paging through it.

Gather, the Art of Paleo Entertaining went right to the top of just about everything I’ve seen, arguably including the sciency books. It’s really more of a Foodist (review on that coming up—as a non-Paleo but Real Food entry) or Real Food book, focussed on gathering; that is to say: getting together with people you love and cooking for them.

I feel my inner anarchism rise: Anarchy Begins at Home: The Blog Series Part 9 – Conclusion; How to Fix Everything. That is, gathering together—whether it be for work, play, survival, mutual betterment or a fine meal—is what we were meant to do. Not an endless but futile attempt to scale social life into the hundreds of millions. Keep it small. The elegance will take care of itself; because you’ll actually care genuinely.

A lot of care went into this creation which when you get your hands on it will become clear. It’s a labor of love on social levels of love, from two to a few. The whole thing resonates with me primarily because over the years that I’ve been snapping pics and tossing them up here, most have been done in conjunction with various gatherings of my own, from four people to a few more. Here’s a few of the general high points of the book.

A few of my dog-eared favorites in the book, for their out-of-the-ordinary uniqueness:

There’s so much more. Of course, all the traditional gatherings are included, as well as a few more things like birthdays, ethic themes, even a cocktail party. Seventeen different and unique gatherings in all.

Now take a look at the short book trailer.

Back when I reviewed their first cookbook I had assumed they were married already. So I asked Hayley how come she kept her last name, and didn’t go with Staley; and I think she said “never!” Turns out, they weren’t married but as you learn in the book, became engaged during the creation—told you it was a labor of love. So I chided her in a Twitter back & forth a while back and she told me she’d changed her mind. She’s going to be Hayley Staley and I just think that’s gonna be all sorts of fun.