What began as pretty much a weight/fat loss deal has quickly become much more, as through weeks 5 & 6, I have neither lost or gained any measurable weight; and whereas I began this deal at 203 and am now around 187 (16 pounds lighter) I actually “feel” bigger. Feel stronger, too.

I’ve gotten endless shit in various comment threads over the last couple of years. Deserved, probably, but I just could not go to the gym, which was a downward spiral in terms of attitude. Yep, I was scared away, having lived for months with 24/7 pain, knowing the very dark, suicidal places I went to during that time. I was content to pack on 20 pounds of the 60 I had already shed. Here’s what I looked like at my AHS11 presentation. 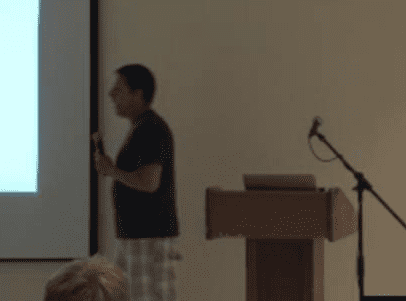 The added gut is only made worse by the lean upper body atrophy. Skinny arms, etc. A year later my “Good Friend” jimmy moore shot this pic candidly and blasted it out on Twitter.

You know what? I never even needed to ask Jimmy anything about it. I don’t operate like that. Not flattering. But is what it is. In the larger context of important things, it helped me.

I could have just gone back to disciplined paleo eating and fasting that was so successful from the start, but I wanted to try new things. I was already into the cold therapy. Still like to get in cold water but as a daily or several time a week deal? ‘Aint ever happening, ‘Ray,’ and I’m a guy who kinda loves it for fun. Not that much, though.

Then there was the potatoes. It’s true. If you eat mostly potatoes with just a little added fat, maybe a little added protein, you will drop weight, and fast. You just can’t eat enough potato. Problem is, I love potato and inside of a week began to hate potato, so that was too big a price to pay. I still don’t even want to look at a baked potato.

Then I found the sweet spot, for me. It’s my Lilly White Ass Norther European Milk & Kefir Diet. Oh, you’re lactose intolerant? Fuck you. I. Don’t. Care. So sorry. Supposedly, Kefir works to help many become tolerant, even of milk—as though I give a fuck; thought I’d mention it though. Try it; or shut the fuck up. (…just kidding, folks…but do give it a try if you like) 🙂

Alright, as of today. Net 16 pounds lost, but way, way stronger and building a lean substrate from which to work. Like I said, this is no longer about “weight loss,” it’s about recomposition.

Let me be clear. I’m not there yet (plenty of gut flab to lose), but at the same time, I’m rather content to mostly sit on my ass, drink milk and kefir, spend about an hour in the gym PER MONTH, and grow more muscle and strength than many who slave for hours in the gym. I’m not interested in being ectomorphic, either. Sorry Skyler. 🙂

I want to be be rather big + lean, or go the fuck home.

Doing a workout with Dr. Doug McGuff and Skyler Tanner was a godsend for me. Unless you have specific athletic goals or just love the gym for some reason, an hour per month is all you need. You gotta make it count, though. Sunday I went intending to do a full body. Started with deadlift. 2 sets, 5 reps each for 275 pounds. I’m staying there until I can do it with two little fingers (I was previously at 325, before my injury). Then I went to the leg press machine. 400 pounds for 2 sets, but the first one was 10 reps done “time under load” style. That is, various movements and pace, but never locking out at the top or bottoming. You stay loaded the whole time, do plenty of static holds in various places. 2 minutes. Then I did a 10 rep set at rythm for fun.

I was shot. Called it a day. Will probably do upper body today or tomorrow and go for a long swim after.

Oh, and all you fuckers in comments, various places, about me? You know who your pathetic asses are: Go fucking fuck yourselves. I told you: the last laff and obscene gesture will be accounted for. Oh, and when I do take that final shirtless shot? Yep, I’ll be tanned and severely dehydrated, just like everyone else who does it.