Did you get the memo concerning the huge problem of misandry in our culture?

Misandry (pron.: /mɪˈsændri/) is the hatred or dislike of men, the hatred of maleness; it typically does not refer to a hatred of individuals but of men as a group or class.

Suppose we design a test to eliminate confounding variables as much as we can. As you can see from the definition, misandry (and misogyny as well) is not about one’s judgment of any particular individual (y’know, like how every racist has a best friend who’s black). One way to do that might be to design a study such that you eliminate that individual element, so that judgments are based on base, knee-jerk reactions to photographs of people of the opposite gender they don’t know. In both cases—men judging women and women judging men—they’re essentially judging pure perceived intrinsic characteristics of strangers.

Could we then perhaps tease out a generalized bias and from that, draw any associations or conclusions between the general misandry of women vs. the general misogyny of men? Well, that’s for you to judge for yourselves; but as it turns out, we have data. Turns out that online dating sites are a pretty interesting source of data mining and even explicit testing.

The folks at OkCupid did just that. I came across this Wall Street Journal link parade via a Mike Eades tweet this morning. It references a blog post by Christian Rudder of OkCupid: Your Looks and Your Inbox. There’s a number of interesting data, but I’ll just focus on the first part. Go check out the post for the rest.

The WSJ post is more to the direct point, so I’ll quote from that.

OkCupid asks male and female users to rate the attractiveness of members of the opposite sex on a six-point scale, in which 0 is the least attractive and 5 is the most. The light line in the nearby chart shows the distribution of female attractiveness as rated by men. As you can see, it is close to a normal distribution–call it the belle curve. That is, the average woman’s looks are “medium,” or 2.5; and so are the median woman’s, as there are approximately the same number above and below the midpoint, with the numbers declining more or less evenly approaching either extreme. 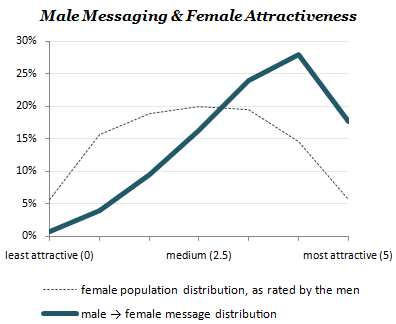 So you have two data sets here. The light line is the attractiveness curve where men were asked to rate women 0-5. Pretty fair, eh? Perfect Bell Curve, which occurs throughout nature. One might call it a natural distribution. The other, darker line, represents the actual behavior of men in the choices of who they are going to message in an attempt to make contact.

The second chart is the same as the first, with the sexes reversed: The light line shows the distribution of male attractiveness as rated by women on OkCupid. The average gent, it seems, is quite unsightly. More than a quarter of men are 0’s, and it appears a majority rate 1 or below. “Women rate an incredible 80% of guys as worse-looking than medium,” Rudder notes. “Very harsh.” 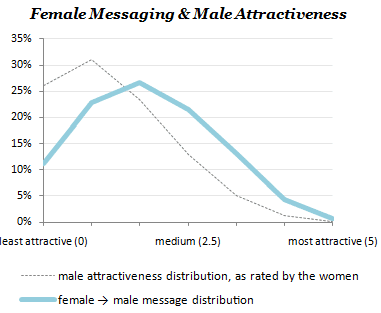 I’ll emphasize. While the misogynists gave womyn a pretty fair shake—half below average and half above—the misadrists Howitzered the gentlemen. “More than a quarter of men are 0’s, and it appears a majority rate 1 or below. ‘Women rate an incredible 80% of guys as worse-looking than medium.'”

Oh, my. Does seem to throw a bit of a monkey wrench into the notion that guys hate women and women are just victims.

I think the fact that’s most interesting to me is the difference in behavior given the group distributed perception. The guys see female attractiveness as a natural distribution but go after the perceived hotties. The women, knowing other women, have given up. They think men are basically gross and there’s just no point in going after the tiny few Brad Pitts they perceive otherwise, and so settle on a potential stable provider.

Imagine a world where both human males and females exist (as they are now, which is largely based on sexual reproduction—so suspend disbelief), but reproduction is asexual for both. Prediction: the women go extinct from starvation whilst bickering with one-another and the guys keep making shit in their garages, in-between hunting excursions for food. Or, for every fancy dinner party the wife puts on, husband would have preferred just eating a sandwich over the sink—and getting back to the garage where his homemade nuclear warhead is nearing completion.

There’s really no such thing—real thing—as misandry or misogyny. Racism, yes, because it’s a quite different prejudice epistemologically and behaviorally. “Misandry” and “misogyny” are ridiculous, weasel, loaded words by definition, a mere word game—the sole point being to put you on the defensive…and why you never hear the word misandry and always hear the word misogyny (sour grapes). Sure, at the vast extremes, there may be women who just hate men metaphysically, and vise-versa. But that’s a recipe for extinction—and have you noticed the population curve vs. excess caloric intake since Paul R. Ehrlich doomed us to extinction in 1968 from starvation (…and that lying opportunistic moron still teaches at Stanford)?

What you have is men being men and women being women; a simple function of sexual reproduction since time immemorial, each contemplating the others’ innate proclivities, endearing indiosyncacies, values and perception of reality—and what must be done in the fact and face of it. Reality can suck, so what you really have is a natural, grass-is-greener resentment in both directions. Men have never generally shirked their role—going even so far as to go to war and kill people to maintain their perceived sense of life & culture, institutionally. Nor have women, who have wholeheartedly supported men in killing vast others every single step of the way.

Men know this and so do women. Accordingly, men have the luxury of being sloppy, gross, geeky…farting at will and laughing about it—and go for the trophy because they are hunters and love a challenge. Women have no such luxury at all. They go for stability, ability, loyalty and a whole lot of other things that are not only not correlated with Brad Pitt looks but more likely, are inversely correlated.

This is why you have romance novels. What’s the male equivalent? …Tom Clancy.

In the end what’s really cool is that most of us, with a little perspective and the virtue of time and a bit of age, come to realize that not only did we make our own souls as we created our lives, we influenced the making of the soul of the one we imperfectly chose to be with. …And vice-versa.

Of course, this is all just hoopla, because we have “advanced feminism,” now. Yeeha!