But, supposing you could, you could write a blog about that.

You could even write a New York Times piece about that. Oh. Wait. That’s about meat, again. So sorry. Can’t seem to find a current, mainstream article about this-or-that toxin or anti-nutrient in any plant where, if isolated and ingested with abandon causes Bad. Shit. To. Happen.

…I’m giving the benefit of the doubt that Bad. Shit. found in red meat is really Really. Bad. Shit. I actually haven’t read the article. Have you? Silly. Time waster. You see, deconstruction is easy. Or, in the words of Sam Harris the other day, in a post most paid no attention to because It. Wasn’t. About. Diet.

A general point about the mechanics of defamation: It is impossible to effectively defend oneself against unethical critics. If nothing else, the law of entropy is on their side, because it will always be easier to make a mess than to clean it up.

The bottom line is that any and all critiques of basically real food are properly dismissed out of hand for the violation of evolution. I could go on and on, but we’re still locked into the Christianesque notion of Original Sin, whether explicitly or more commonly now, culturally and implicitly.

…the haunting fear that someone, somewhere is having a good time. — H.L. Mencken

Or, people seem to have this unnatural, carnal desire to consume flesh, whilst shunning the ethical purity of vegetables unless accompanied by meat and its juices.

But we see it everywhere, even in paleo. …An example of an unbridled deconstructionist. She’s actually got a gig to speak at the next conference of the very Society she’s been smearing since its beginning. And not only does she smear the Society itself rather than lift a finger or key-on-board to promote it, she refers to it as “Instestral,” and then deconstructs it further when called on it, with meaningless distinctions.

Further. She has, over the years, attempted to deconstruct and smear an enormous percentage of her fellow invited past and present speakers to the event. She found a “toxin.” There’s an “anti-nutrient,” there. Carole Simpson’s CarbSaneR is just dessert. Eddie, a UK LC diabetic—who helps people—is also lending a hand and making fun of her and her sycophants: Carbsane blog Grashow the Gimp returns to the fold! 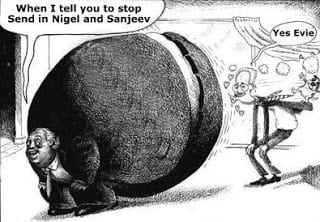 Punchline: Evelyn’s AHS13 Presentation in Atlanta is to be about beans. Oh, and in addition to Evelyn regularly sockpuppeting her own comments, Grashow looks to be a neighbor, family member or friend.

What does that mean? Just this. There are basically three ways to go in this deal.

It’s simple. And guess what? The vast majority of Paleoish peeps are of the #2 mindset, so I never get bent out of shape when they criticize me for going after the parasites. That’s actually a good thing. There are some who love the drama but even there, by and large, it’s like a movie for them where the good guys (#2 & #3) win in the end.