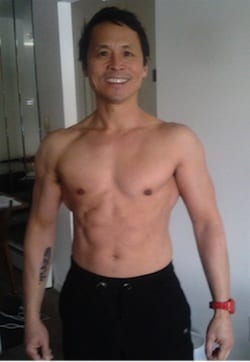 One of my readers who’s always been friendly to myself and this blog emailed to let me know he was featured in Marksdailyapple.com last Friday. His transformation is very motivating on several levels, especially for those older folks in their fifties.

It ought to be motivating and informative as well for you young guys and gals spending your life obsessed with your workouts and eating enough, frequently enough, to “achieve hypertrophy” (muscle growth).

Jack has been there, done that—for years and years—and never got the results he was looking for no matter how hard he tried. Here’s some prescient excerpts from an article everyone should read in its entirety, and pass around to those they know caught in a rut like this. You might save them decades of self torture and misery.

It goes to show just how powerful the wrong message can be, such that a person will go—literally in Jack’s case—for decades doing the same thing over and over, expecting different results. Reminds me of the people I see on the treadmills and ellipticals over and over, every time I go to the gym.

Like most guys in the early 80’s, I was obsessed with getting big. Although, I never considered being a competitive bodybuilder since the thought of parading on a stage with the background music of “Eye of the Tiger” while sashaying with a sock-stuffed Speedo is way beyond embarrassing. I did embrace the lifestyle of a meathead: I spent 2 hours every day at the gym and stuffed my face with food and protein drinks continuously. By my mid-20’s I had gained almost 70 pounds, although I doubt it was all muscle. Along the way, I bought in to most of the myths that conventional wisdom had taught me, which actually made me fat and unhealthy. […]

At that same time, my perception of myself was so distorted; I felt that the 7 mile runs three times a week were making me lose inches off my chest and shrinking my arms, so I continued bulking up with the same 6 meal a day plan that consisted of a lot of the famous tasteless and skinless chicken breast and fake protein drinks filled mostly with fructose and sugar. This was the 1990’s and just about everybody was afraid of fat because that’s what all are doctors told us. The fat-free craze and “the cholesterol is dangerous” phase really took off during this decade before Atkins came along and we all bought in to eating what we told were “healthier” foods like vegetable oils, bacon bits, and margarine. Looking back on now, I pretty much went about fifteen years without tasting butter. […]

As I got to my mid-40’s, I was having health issues as my blood pressure skyrocketed. I still went to the gym, but by now I was pretty much going through the motions by only working out my arms and chest. I didn’t see the point of getting strong at my age, so I gave up squatting and deadlifting years ago. I also stopped running. My knees and shins were shot from all the heavy pounding I did while running through the streets of Los Angeles. I started getting really depressed as well because I spent months and months without even having a date. I pretty much felt that my attraction level had gone down the tube and I would end up being just another miserable old man living alone in his apartment walking around in his underwear. […]

I was still very neurotic about my eating habits as I was about 50 percent Primal at this time. I felt more compelled than ever to continue my carb loading and eat 6 times a day to fuel my high intensity training. Even though I was finally able to sever my adolescent needs to bulk up, I was still caught in this force feeding mode that I just couldn’t seem to escape. In my 20’s and 30’s I could do it, but when I got to my 40’s, it became such a pain in the ass and such an inconvenience for me. I was always looking at my watch to see if it was time for me to eat again. I couldn’t even go to the movies without having not only one but two meals packed with me. The constant planning of what to eat next, tomorrow, cooking 8 meals at once, nearly drove me bananas. […]

The thought of not eating or even eating less than 6 meals a day seemed so out of the question to me, but I needed to prepare myself or starve to death during our 10 day car trip journey. To be honest, when Mark published the fasting series, I actually skipped them and didn’t read them. I had been so ingrained and pounded by the myth of needing protein every two hours, I just didn’t think anybody, even Mark Sisson, could convince me to do a fast. However, I couldn’t avoid all the intermittent fasting questions that were in the MDA forums. One day I just had to peak, and when I did I couldn’t stop reading. I was blown away by all the potential and positive health benefits.

Those are just a few of the high points from the story, so check out Jack’s full feature “Free at 50” at MDA.