it’s simply the case that not a single one of your way back ancestors ever partook of the moist, crispy goodness.

It’s obvious and elementary, Watson. The printing press had yet to be invented. Thus, no newsprint. Thus, nothing in which to wrap fish & chips. Thus, no such thing as fish & chips. Even Nigeepoo can tell you that.

So the question is, can you make it better, and not suffer the typical OMG aftermath of the combo of machinery lubricant fried batter, fried potatoes, and tons of malt vinegar and tartar sauce to make it palatable and to make up for overcooked, dry cod—all whilst the batter is plenty moist with oxidized soy oil?

First, pick your gluten. I chose the beer, less than a bottle (thanks dad; 4 of 6 still in the fridge) and used Bob’s Red Mill gluten free flour (made up of garbanzos and favas; no whiff of Chianti).

The batter is brainless. Just enough flour you think you’ll need. Add a teaspoon of baking soda. Get the whisk and stir as you pour a bottle of beer until it’s…BATTER! Done. 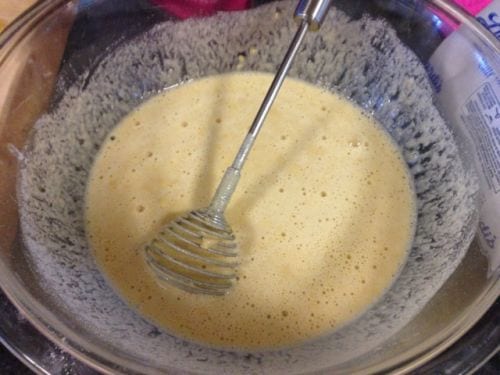 You know what I hate? I hate fucking idiots who’ve been cooking fish & chips for years and still can’t beat their way out of a greasy newsprint. Ever get a “fish & chips” where you’re like, “what in the holy fuck of God is this shit? Did I order dumplings? I don’t think I did, because I’m not so fucking stupid as to think a lump of milk moistened white flour dropped in a deep fryer or boiling chicken stock qualifies as ‘food.'” 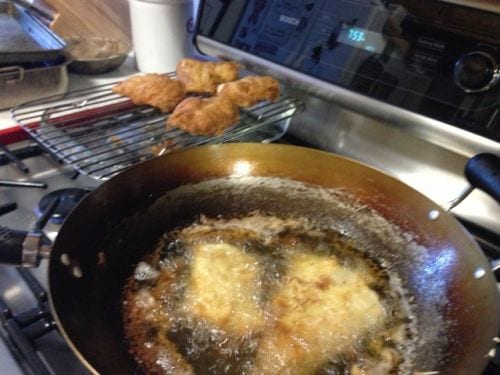 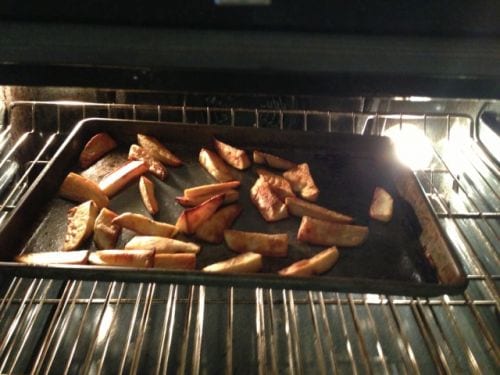 The fish is as you see. I’m using high oleic sunflower oil, my go-to for high-heat applications. It’s like 70% monounsaturated (very unlike standard sunflower oil super high in n-6 PUFA) and has a super high smoke point (which I read as: oxidation…but I may be wrong and stupid and I could use olive oil but this has no imparted flavor and if I want olive flavor I’ll just add olives and…that’s all). 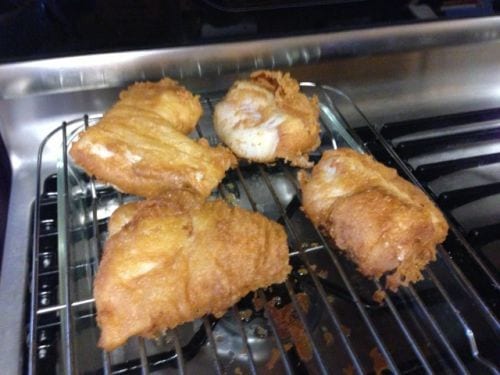 You know what else I absolutely hate about those who always ruin fish (Cod—God—in the application), in order to serve you fried batter and potatoes with dried fish? They don’t know how to cook it. I’m convinced deep friers were invented for idiots—both for the “cooks” and the consumers who’ll settle for anything crispy. Here’s how that stupidity goes: put it in and when it stops bubbling, it’s absolutely done. It’s safe, too, because no bacteria could have survived the heat—much less the heat-induced desiccation. Fish cooks damn quick in almost any application. Therefore, presence of mind is called for. 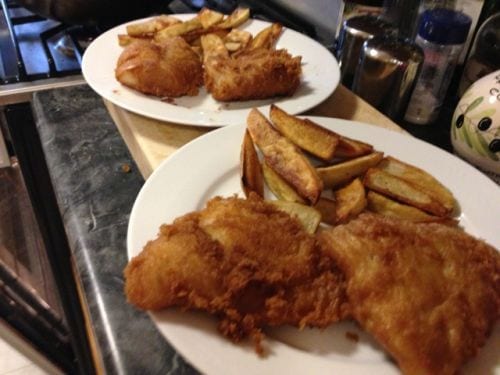 I didn’t have time to make a tartar sauce, so Trader Joe had to step in. But anyway, seriously, the very first time in my life I’ve done fish & chips and my wife told me they were the best she ever had (she says nothing when she no likey). Me too, and it goes back to what I said before. I realized how the fish is always sacrificed for the sake of the damned batter—fucking deep fried white flour. 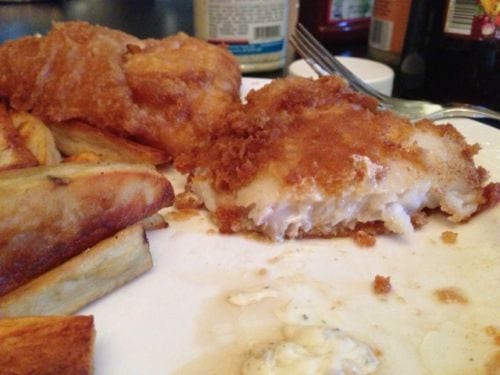 I surprised myself even, just kinda winging it in the frier. About 2 minutes on one side, 1-2 minutes on the other and…Jesus I hope the fish is done.

It was, and even the thickest piece. 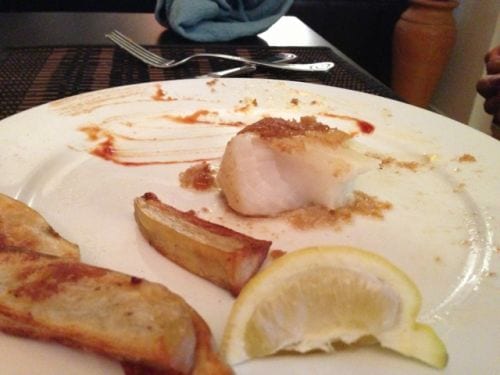 Voi-La (Look at THAT shit)

It was epiphany. I doubt I’ll ever order fish & chips anywhere again because compared to this standard I set on the cuff and while running in place on a given afternoon, all battered and fried fish is cooked to fucking dry death by comparison. And sitting here 3 hours later, I’m not running for the baking soda to stir in water to dose the nuclear heartburn reaction.