The move of this blog, from being hosted at Foliovision to where my buddy Robb Wolf hosts his place—MediaTemple—began at about 6:30am PST, yesterday. By about 10-11, all the grunt work had been done by Karol, everything looked workable, and so I changed the DNS records and relaxed; because there’s little that can be done until it propagates, such that you’re hitting the site on the new server.

Soon as that happened at my end, I did a very stupid thing. I changed a setting. Five measly little characters.

Ever heard the metaphor about sawing off the branch you’re standing on? Yeps. It’s what I am done. Soon as I did it, the gauntlet began. You see, Foliovision—the guys & gals who keep things going around here—live and work in Slovakia…Bratislava, to be precise. The work had been finished, it was well into the evening over there, and since they weren’t hosting my site anymore, I had fucked things up, I was on my own. Moreover, it was the eve of a holiday over there.

It was awful. Could not log into WordPress and even worse, the blog stopped serving up the design theme (CSS). It was just raw hlml that looked like shit if you were one of the ones who saw it. So I’m methodically going through every .php file with a name that made sense from a configuration angle, searching for the magical line of code. No joy. So instead, I went to dinner with Bea and my parents at Teske’s Germania in advance of my 75-yr-old dad and 72-yr-old mom heading off to Germany for bit of touring. 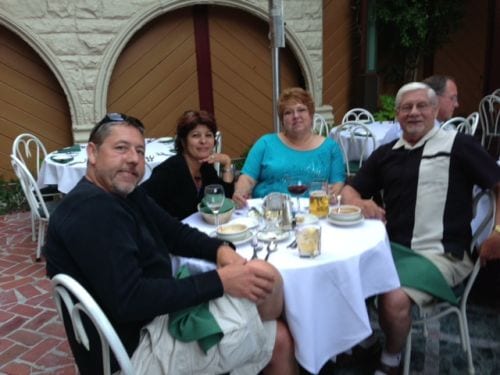 The Biergarten, and smiles can be deceiving

I got back, and just sat & wondered what to do. Then I began Googling. Turns out I was on the right track and one of the config files I’d zeroed in on can be edited with a couple of additional lines to force an override of the database. Just a temp workaround, though. There was a more elegant solution, however: use phpMyAdmin to get into the MySQL database, find the right table, the right row, and edit the setting directly.

It’s amazing what editing a single 5 characters can do. Just like that, everything worked again. Disaster dodged.

So how come I’m moving away from such a fine hosting, design and web development company such as Foliovision? Just different needs and goals, i.e., growth on the part of both. Alec Kinnear, a Canadian expat, has built a pretty good thing over there, and it was one of his initial offerings that got my attention back in 2009, when I wanted to move the blog off the TypePad platform, over to WordPress. I’d already assessed what it would take and threw my arms up in despair when I figured at least 100 hours of work (because of the way TP holds your data hostage, particularly images). Turns out Alec and Martin Vicenik had come up with a bunch of scripts to automate the process.

They got it done fast and have serviced every need competently since. Martin Vicenik, in particular, is probably the most competent tech guy I have ever encountered. In four years, I can’t recall even a single fuckup, and he always seems to have the correct answer and solution to any problem or issue I’ve ever presented.

Alec & I butt heads often enough. Basically, he sometimes thinks I’m an ungrateful bastard and he’s probably right. I sometimes think he’s an elitist Eurosnob who likes the ballet too much. But we always get things worked out and frankly, I always prefer to do business with people who tell it like they see it.

It was time for me to move on for a number of reasons that have nothing to do with Foliovision’ quality of service. They are an intense, full service, VIP operation; and right now, I need to be doing a lot of my own stuff. Their systems have evolved with very high security in mind, such that one account on the server with its owner futzing with stuff doesn’t bring the whole thing down for everyone. In short, I need to do a lot of tinkering on a number of prototype sites, learn a lot, and that’s just not a match for Foliovision’s current business model.

However, if you have, or are involved with, a high traffic critical website and require worldclass security and speed—where almost any and all problems that arise are dealt with before you even knew there was any problem—then it’s going to be very hard to do better than Alec and his team.

It was a great run, gentlemen. I’m privileged to have been a good part of it. Good show, all around. I will continue to use Foliovision now & then for various programming and design that’s over my head, or not worth the learning curve, so you always have the option to use them in that capacity as well.