I’ve yet to blog about what I’m up to, eating wise, but this offers a clue. I’m literally on my last weird experiment—I hope—and it involves beans / legumes, but prepared in traditional ways (a 24-hour soak). The resistant starch via potato starch supplementation is no longer an experiment but a way of life now. More on that later too.

In general on beans: mixed results fartage-wise, but sure tasty, filling, and damn satiating when part of regular meals. Other than fartage, no issues such as heartburn, bloating or going comatose (I keep portions reasonable in size).

Perhaps my very favorite legume is lentils (followed closely by chickpeas, particularly cold, as a salad topping), so here’s an application that I cooked Tuesday afternoon to basically serve us all week long.

I used this recipe from Food Network almost to the letter: Lentil Sausage Soup, by Ina Garten. It is really awesome. More effort than I usually do because I like really simple, but worth it.

Here’s what I changed, which on large is pretty immaterial: 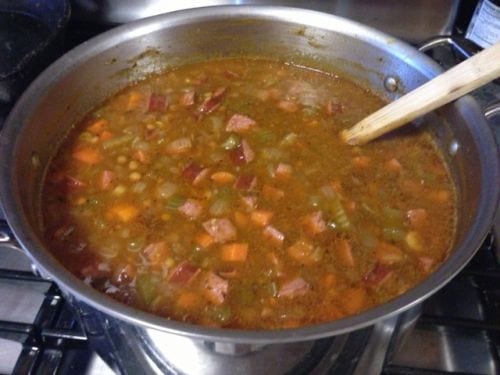 A Big Pot Lasts All Week

I can’t even describe how good it is and how the cumin and tomato peek through, along with the very rich, reduced broth. This is the standard by which all comfort food should measured—lentil soup with vegetables and meat in a reduced beef or chicken broth. I’ve always basically loved all meaty preparations of lentils. 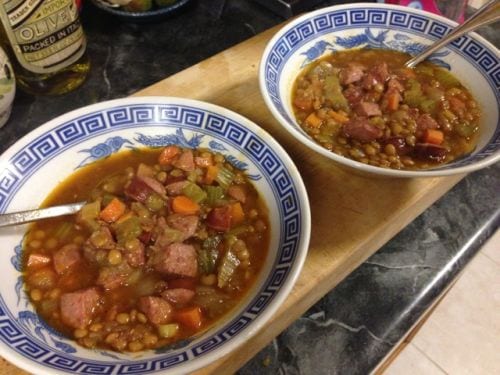 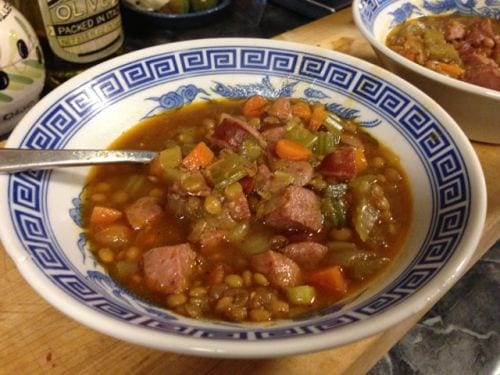 Guess what? If you likee lots & lots, it’s an easy breakfast too. Less broth, nuke it for a bit and toss on some eggs fried in butter. Duh…with a spoon, of course. 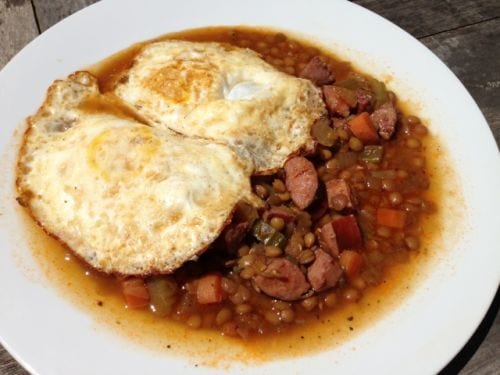 I’d tell you how good that was if I could. That’s the thing about wholesome, extreme comfort food. You can’t actually explicate how good it is.

And you know what, both meals just sat there and digested just fine, your best clue that you’re on the right track.