Yep. Read it and weep, you idjit Paleos; you, so erroneously self-assured as to dismiss the dietary diktats of your superior masters and their grain and drug peddling bedfellow financiers.

The abstract of the “study,” courtesy of all-around fuckwit, Eric Trexler.

Background: The Paleolithic (Paleo) diet is one modeled after the perceived food consumption of early human ancestors of the Paleolithic Era, consisting of mainly meat, fish, fruit, vegetables, eggs, and nuts. The purpose of this study was to examine the effects of a paleo diet on blood lipids, including high-density lipoprotein (HDL), low-density lipoprotein (LDL), non-HDL cholesterol, triglycerides (TG), total cholesterol (TC), and the ratio between TC and HDL (TC/HDL) in a healthy population. [emphasis added]

There’s your premise: ‘we’re going to evaluate your results according to our standards—not yours.’ Of course, their “standards” are based on a chronically unhealthy grains, sugar, and machinery lubricant (processed food makeup) munching, highly overweight and obese society that subsists primarily on some manner or other of processed crap in boxes and fast food cheaply produced and engineered by global food conglomerates, combined with increasingly uniform and tight “standards” in terms of biomarkers—such that the global drug conglomerates and their distribution network of pushers (i.e., doctors and grant whore researchers) can sell you pills to ameliorate the problems caused by the former.

It all has zero bearing on a healthy diet, Paleoish or, The Old Grandma Diet.

Methods: Subjects of both genders (23 males, 20 females) with no history of diabetes, heart disease, dyslipidemia, or other metabolic disease were asked to eat an ad libitum paleo diet for 10 weeks. Throughout the intervention, subjects participated in a CrossFit-based, high-intensity circuit training exercise program. Prior to the intervention, body weight, body fat percentage (BF%), maximal oxygen consumption (VO2max), TC, TG, HDL, and LDL were measured. These measurements were repeated following 10 weeks of a paleo diet.

Wowzers! 10 whole weeks? Well, can’t allow those people to go without all those “cholesterol lowering” crap-in-a-box cereals for very long (in favor of meat, fish, fowl, vegetables, fruits and nuts) now, can you? You might run into problems with the “ethics” committee. Or, hell, perhaps The Ohio State University might put in jeopardy some of that nice research funding. Here’s the Fed portion of their total $934 million (about 50% of all). 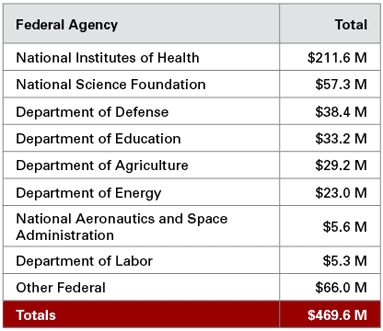 Notice how the National Institues of Health (cholesterol is BAD) and Department of Agriculture (grains are hearthealthywholegrains = GOOD) make up about half of the Fed portion, so 25% of the whole. Then there’s Industry Funding, 11% of the total, $101 million.

Don’t suppose that has any bearing on things. It’s all just about Teh Data.

“[D]eleterious changes were found.” OMG! Change your whole diet and workout regime and over 10 weeks (!!!) your lipids wiggle around a bit +/-. “Deleterious” simply refers to the completely unestablished premise that cholesterol levels mean much of anything for individuals one way or the other. It couldn’t possibly be anything like, dropping sugar water and sugar laden crap in a box for 10 weeks begins to clear up subclinical fatty livers with a concomitant rise in LDL, Trigs & such, ya think?

Conclusions: Our results demonstrate that an ad libitum paleo diet intervention is associated with deleterious changes to blood lipids in healthy subjects, despite concurrent improvements in body composition and cardiorespiratory fitness. Future research should focus on determining recommendations that embrace the positive aspects of the paleo diet, while minimizing any deleterious impact on blood lipids in a healthy population.

Turns out that Dr. Adel Andro of SuppVersity mentioned this study a few days back and did up a nice chart (click for full size).

If you take a closer look at the abstract and the actual “side effects” (figure 2), the 10-weeks of paleo dieting + CrossFit-based, high-intensity circuit training exercise program had on the body composition and fitness levels, I personally cannot but ask the following question:

“What is the significance of the elevations in LDL and minor reductions in HDL in a scenario that produces exactly what has just been shown to be at the heart of the ‘Obesity Paradox’ and lipid values that are still within the ever-narrowing ‘normal’ or ‘optimal’ range?”

I’ll leave it up to you to answer this question and decide whether it can really be so bad to rid yourself of all modern, processed foods including any form of processed sugar, soft drinks, and coffees, while fueling your life and workout related energy by increasing your consumption of lean meat, fish, eggs, nuts, fruit, and vegetables.

Now, let’s take a look at the title of the study, again:

That’s manipulative dishonesty, folks, and plain as day. By smuggling in an unsubstantiated premise (that cholesterol really means much of anything causal for individuals) and using it to imply that “Healthy Subjects” were transformed into less healthy, as a direct result of a paleo diet of whole foods and intense exercise Eric Trexler renders himself unfit for employment in any trusted position anywhere.

Personally, I wouldn’t trust that dishonest, lying fuckwit to fetch my mail or take out the trash.

Now then, I have just rendered richly deserved justice.