Why Elementary Schools Going Vegetarian Will Be an Increasing Trend (Money)
747 Crash on Takeoff in Afghanistan?

As I tweeted to Andrew Badenoch, “beautiful find.” Glad my Daily Paper.li account picked it up. For once, a rather positive take on Paleo, and from NPR no less. Here’s some pics (there’s more pics in the article) and excerpts. 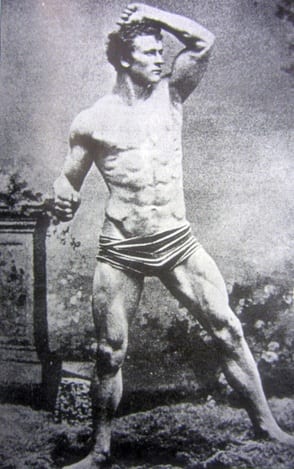 Eugen Sandow, photographed circa 1885, was a German-Russian bodybuilder credited with founding the physical culture movement in Europe. He opened several Institutes for Physical Culture to teach healthy eating and physical fitness throughout Europe.

The paleo diet is sometimes ridiculed as a fad that relies on an overly rosy view of our primitive past.

But it turns out that popular health movements that advocate going back to a more natural way of living are nothing new.

Consider this quote: “It is reasonably certain that man was originally made to live and exercise in the open air, bathe in rivers, and expose his body to the healthful action of the sun.”

“Civilized man is manufacturing and eating many substances that slowly but surely lead to degeneration, disease and premature death.”

These nuggets could easily come from a paleo lifestyle blog, the kind that argues our modern diet and way of life are making us sick. 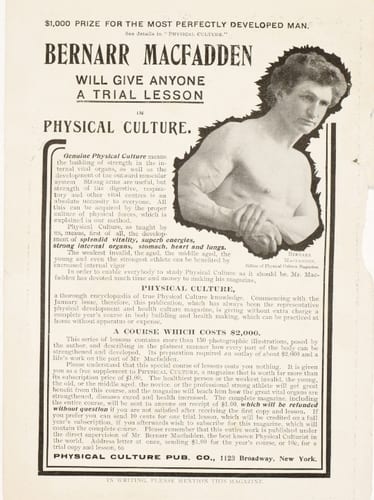 An ad for Bernarr Macfadden’s physical culture course appeared in one of his periodicals, Fair Play, in 1902.

As Hamilton Stapell, a historian at the State University of New York, New Paltz, found when he went digging into the archives of physical culture, there are striking resemblances to the paleo movement today. And, he argues, this shows that people seem to romanticize a healthier past in the midst of great societal upheaval: the Industrial Revolution, in the case of physical culture; and the digital revolution, in the case of paleo.

“The problem, according to physical culture and paleo, is modern civilization,” Stapell tells Shots. “With so much change, people reject overconsumption of food, alcohol and mainstream medicine, and look for ways to get back to nature. Both movements have a clear sense of going back to the past to fix the present, and a willingness to throw out what’s normal and acceptable to try an alternative.” 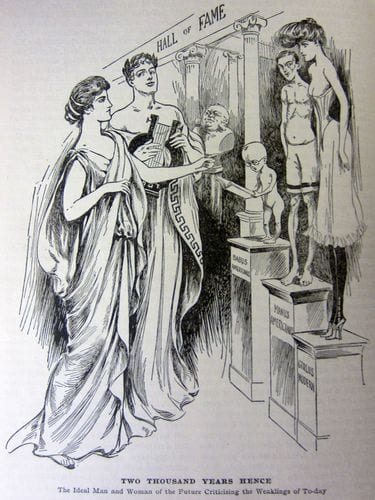 In another editorial cartoon from the September 1905 issue of Physical Culture, the ideal specimens of humanity judge the weak.

The paleo movement, also known in scholarly circles as the “ancestral lifestyle,” looks at modern health from an evolutionary perspective, and finds inspiration for what to eat and how to exercise from the past — the distant, preagricultural past, in some cases. Followers adhere to a simple diet of meat, fruit and vegetables, and exercise in ways that mimic the movements of our ancestors — like lifting heavy objects. 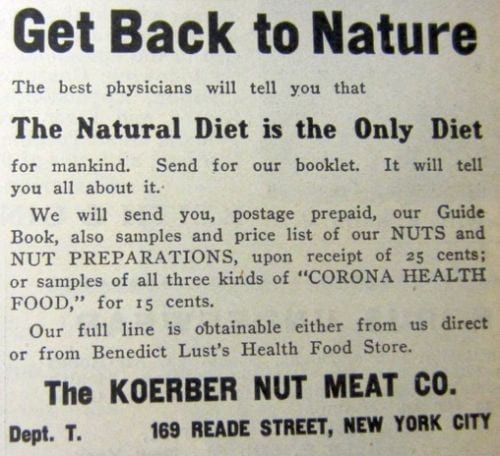 A health food ad in The Naturopath from 1910. According to Hamilton Stapell, a historian at the State University of New York, New Paltz, the physical culture movement advocated a scientific approach to nutrition, with an emphasis on eliminating processed foods.

Rewind to the 1880s in England when Eugen Sandow, a Russian-German, was pioneering the sport of bodybuilding. Over the years, Sandow fine-tuned his ideas about “natural” dietary habits and weight training, sowing the seeds of the physical culture movement. Rather than the preagricultural era, he drew inspiration from the Greeks and their ideas of the perfect physical form — he even modeled his own body after Greek sculpture. He would eventually open the first of many Institutes of Physical Culture to teach diet and exercise to the masses.

As Stapell notes, weightlifting was at first seen as a peculiar activity 100 years ago in the same way that CrossFit and Vibram FiveFinger shoes — staples of the paleo community — seemed extreme when they first appeared a few years ago. 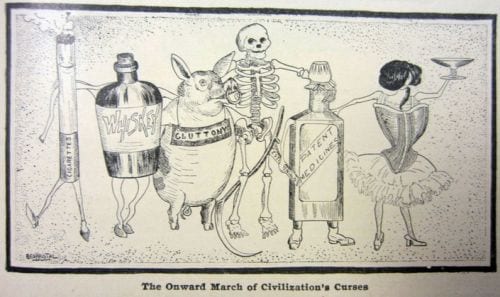 An editorial cartoon from the April 1905 edition of Physical Culture magazine denounced the trappings of modern civilization, including smoking, alcohol, overconsumption of food, patent medicines and ill-fitting clothing.

Just as the paleo community has evolved largely through the Internet, with hundreds of paleo bloggers offering dietary and exercise advice to newbies, the physical culture movement spread through magazines and books. Both media rely heavily on success stories — photos and stories from people who try the alternative diet and exercise, and lose weight and feel better. […]

The diet recommended by physical culturists emphasized natural and pure foods, and took a scientific approach to nutrition. White sugar and processed foods were no-nos, while raw milk and cod liver oil were encouraged. But even then there was a lot of disagreement about the ideal diet.

Though I don’t recall it from the schedule and missed it, Stapell presented at the Ancestral Health Symposium last year (AHS12). Also, Skyler Tanner and Keith Norris spoke of the Physical Culture movement in their presentation at AHS11.

I guess there truly is nothing new under the sun.