…Just a silly post about what’s on my mind and a recounting of a random last few days.

~ A spontaneous meal on Friday evening with friends from our former downtown lofts residence (“what’s in your fridge?…here’s what’s in mine”). We worked it out like we always did. Not shown is the homemade pineapple ice cream with fresh bing cherries. Meat wise: grilled burgers and taco meat (all grassfed in this case). There’s guac as well. The tortillas are corn. 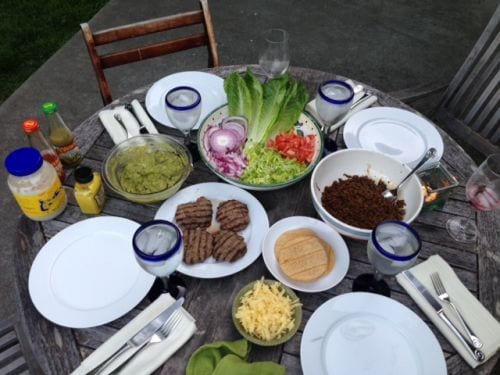 Robert and I handily handled Beatrice and Julie in Spades, and I think that in my case individually, the marijuana helped. That’s by no means always the case. It turns on what I’ve ate & drank. But now & then, I’ll get that certain Rock Star feeling with an herb buzz, and every now & then—for inexplicable reasons—it’ll prove itself in various ways. It’s a rare moment when you really know and take cognizance of everything that’s going on. I just wish I could extinguish the downside elements which in my view, honestly, are far too pronounced to make this sort of thing a regular deal. That’s why I’ve been only an infrequent pot smoker since college. I get it. But I don’t like it anywhere near regularly.

~ We left Saturday to get up here to the “cabin.” It’s rented out most weekends of the year but we’d blocked this weekend for us. Bea is off school for les vacances (do not ask me why, for the French, vacation is always plural—just accept that the idea of vacation as a plurality). The other thing is that while we’ve housekeepers to take care of it year round—even the odd handyman thing now & then—there was a list of things detracting from 1st impression creds, as well as a couple of things that weren’t worth a handyman that I took care of today.

For us, it’s about bringing our place back up to the same sheen according to our standars that’s made it the top vacation rental in Arnold, CA, for the last two years. With turnover and the task that housekeepers are charged with (think linens & towels washing—the kitchen), some of the deeper stuff just gets neglected and that’s why we’re here. Beatrice & I both have sets of complimentary peeves that work well.

~ We arrived on the hottest day of the year so far. Not every year, but most, there will be a random day or two where a temperature inversion gives you Arizona fucking weather at 4,000 ft. elevation. It was 110 driving through the valley, then dove down into the lower 100s as we began climbing the Sierra foothills, but then began climbing again—and by the time we arrived around 4pm, it was still around 100, down from 105. Holy hot!

As per usual, it began to get more comfortable in the early evening as the temperature dropped into the lower 90s…but then felt worse later, as relative humidity increases as the temperature continues to drop, such that by 10 or 11pm, it’s more miserable than ever and your body’s cooling mechanism breaks down because sweat won’t evaporate.

In such case, there’s only one thing to do and guess what that is? The tap water is still at spring mountain temperatures. Probably in the 50s. A completely cold shower at 10pm, then another at 1am before bed, and it did the trick. From sweat hog to shivering in 5 minutes. It sure makes you feel alive, ready to put on a Rock Show.

~ The price point for LED lighting finally arrived for me. I had previously calculated that at about $20 per bulb, the investment would pay back in both electricity costs and replacement costs (LEDs last about 20 years per bulb)—not to mention the convenience of basically never having to replace bulbs again (I’ll be over 70!)—in about 2 years. I didn’t want to spend $1,000 to replace around 50 bulbs in the cabin. Thanks to Cree, I spent about $500—about $10 per bulb.

Back when it was just our place I never had an electric bill over $100. Most were under like $20—because we were rarely there. Now as it’s occupied with renters who don’t care about turning off lights, I’ve had electric bills of $400 (and gas is a different company!). So, I’ll be interested to see if I get the roughly 80% savings I’m planning for.

I always hated compact fluorescent bulbs (CLF). Dumbest thing ever and the light just sucks. I think it was early 90’s when I took note of the LED technology for the first time but it was SUPER expensive. But then, when I saw it, I relaxed. I knew it would leapfrog BOTH incandescent and fluorescent, soon as economies of scale combined with better technologies got the price down (just like flat screen TVs). Accordingly, I have laughed for years at libertarians and others stockpiling incandescent bulbs, especially 100 watters. Here’s the deal: put a 60W LED equivalent next to a 100W incandescent and tell me there’s much visible difference in light output (I replaced most 100W incandescents with 60W equivalent LEDs—9.5W actual usage—and the 60W bulbs got replaced with 40W equivalents—6W actual usage).

An example. The main level bathroom had 4, 100W bulbs over the vanity mirror, and a 100W bulb in the ceiling. I tested with 60W equivalent bulbs, then 40W. the 40s actually provided more than ample light. So, I went from 500 watts of actual usage to 30 watts. Wowzers! That’s 6% for plenty of light and the bulbs last 18-20 years. And, they come with a 10 year guarantee.

Already available now but still very expensive, are bulbs that actually join your WiFi network and can be controlled with an app on your smart phone. Within a few years, price will come down and you’ll not only be able to individually control specific lights or a whole room from your phone, but will be able to adjust both intensity (unlike common CLFs, LEDs work with dimmer switches) and color. Yep, that too. LEDs in their current most expensive configurations will let you change the color of light the bulb emits.

Edison, your time has come. It was quite a run, though.

~ Well, all y’all did always say that you wanted “a government that listens to the people.” Satisfied?

~ On the health & diet front, jimmy moore has apparently dropped around 100 pounds over the last year or so on his “Nutty K” experiment. I think he was down about 60 when The Big Guy bear hugged me at AHS in Boston last August. Cool for him.

There’s a podcast interview he did with Dr. John McDougall, a promoter of a starch-based vegan diet, up now. And it has some steam in raising to the top of the iTunes charts in the health podcast category. My stream of consciousness:

~ Englishman Sam Feltham decided to do a 21-day deal where he ate 5,000 calories per day in a high fat, low carb regime. He started as about a 190 pound dude, so roughly a 2,800 cal per day guy with moderate activity. Accordingly, if you go by the strict calories in/out numbers where 1 pound equals 3,500 excess calories, he should have gained about 13 pounds.

He gained about 1 pound, and he lost an inch on his waist. Now watch for him to be charged with lying about it.

For my money, living daily is not an experiment. However, HFLC seems to work for a lot of people, and particularly those who have issues with appetite control. For more money, I’m at a point in life where regardless, gluttony is simply of no value to me and at times a bit disgusting (I’ve been there). So, I find fault with what I often perceive as the gluttonous allure to LC (and to some but lesser extent, Paleo). This is why my main focus now it:

OK, that should about do it. I have a project to get back to. I’ll definitely be blogging more about Resistant Starch within a few days, but not before Anarchy for Dummies tomorrow. I have tons and tons of stuff on RS and at this point, the problem is how best to present it.