As I posted the other day in a pretty popular post on what I’ve learned—6-Years of Self Experimenting: My Fully Integrated Approach To Paleo / Primal Eating, Real Food and Vibrant Health—I have incorporated a number of things that’s aren’t considered daily Paleo. I thought I’d give a little sample.

Your level of outrage may vary. I still do plenty of “Way More paleo,” as you’ll see in tomorrow’s food post.

First up for today, a corn tortilla with ground beef taco meat, homemade sauerkraut, and a pffft of mustard. Homemade pickle on the side. One could add thinly sliced onion as well. Just thought of that. As always, scorch your corn tortillas a bit on the flame of the gas stove. 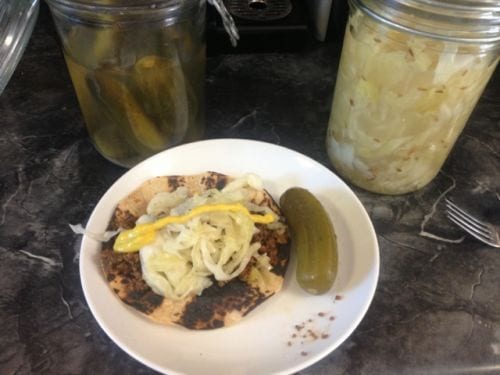 I typically just use the standard taco meat spice you get at the store. I believe it calls for about 1/4 cup per pound of beef drained of fat and water added. Instead, I cook 80/20 on medium low, chop it up finely so it’s like BBs, I don’t drain the fat and use about 150% of the seasoning called for. If I do use liquid to take up the seasoning, then it’s beef stock, not too much, and I let it reduce.

Next up is my concoction for a green chili & beans. There’s a half pound of ground beef, 2 slices of bacon, onion, garlic, and 1 & 1/2 large jalapeño peppers. 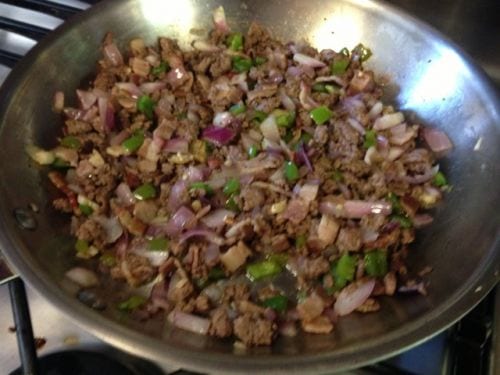 For the beans I used 2 handfulls each of kidney & pinto. This was a late start, so I did the quick soak method. Cover with water, bring to almost a boil, take off the heat, cover and let sit for an hour or more. Drain, rinse, and cook. I cooked in beef stock and tossed in a fresh tomato and a half, then a couple of chopped stalks of celery and carrot. 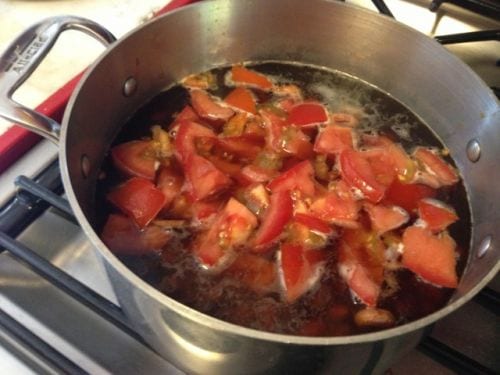 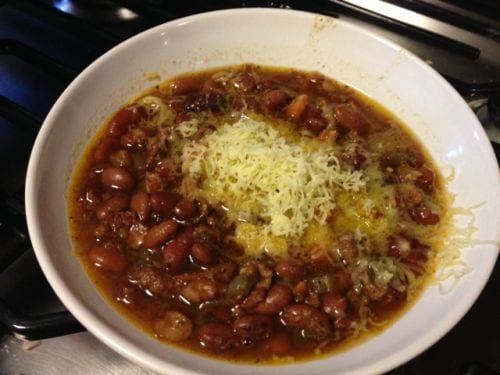 You may notice: only 1/2 pound of ground beef for the whole pot, 3 strips of bacon, and it was a pretty large pot. 4 handfuls of bean cook up pretty substantially. There was no draining or skimming of fat needed. So, one need not completely overwhelm every dish with the meat, especially with something as hearty as beans. 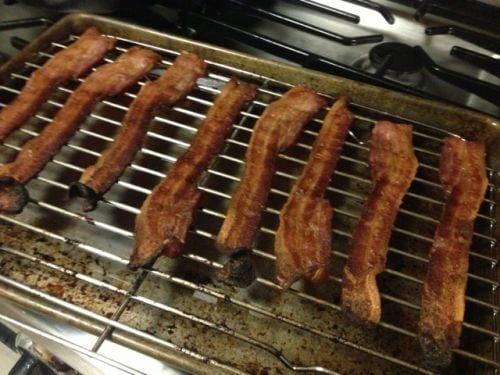 For what little bacon I consume now (the last pound lasted about 2 weeks, and I finally had to cook off the remainder, so I used the oven). Still tastes way too salty, so my use now is far more as garnish in stuff. 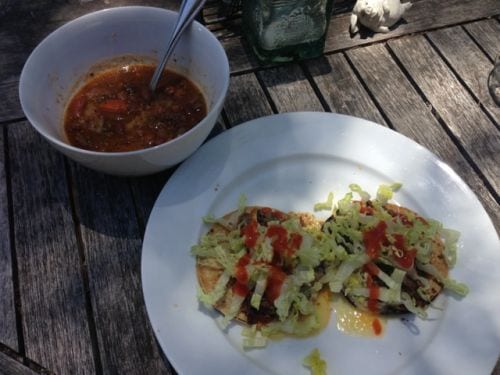 There’s some of the leftover beans, and notice the small portion. I find that I do better on a smaller portion, which is cool because I like beans, sometimes. Alongside are just the two small corn tortillas, scorched a bit, then microwaved with leftover taco meat and a slice of New Zealand grassfed cheddar. Topped with shredded lettuce and a bit of hot sauce. 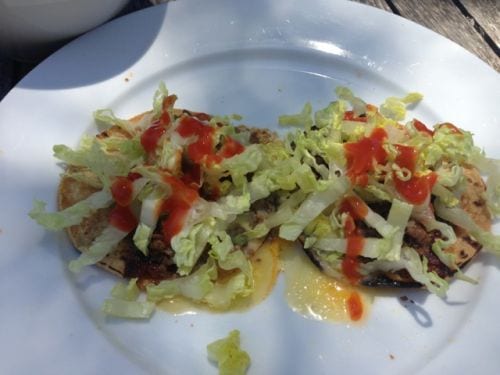 This next was a crazy idea for taco meat and I just love it. Couple of heaping tablespoons of full-fat cottage cheese in a bowl, some taco meat nuked in another bowl to warm up, duped over and sprinkled with peanuts. I get the “blister peanuts” which I believe are boiled or soaked before roasting. They’re wonderfully crunchy. Our Trader Joe’s carries them. 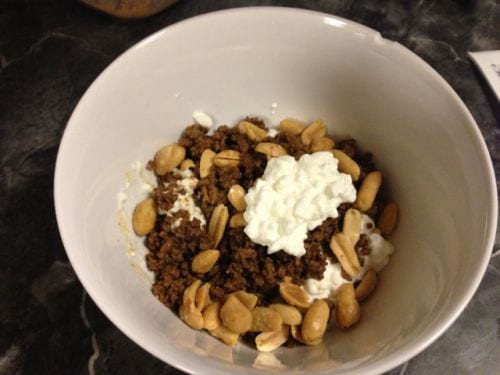 Serious: Try This at Home

Here we have a smoothie. One handfull of fresh or frozen blueberries, 2 TBS potato starch, then a half cup each of quality cream-top chocolate milk (Whole Foods has a couple good ones—1 quart lasts me a week of adding it to stuff, e.g., I like “chocolate milk” cut 50/50 with whole milk), kefir, and whole milk. Take the stick blender to it if you have one. Optional would be a raw egg or just the yolk.

Really delicious and with the addition of the resistant starch in the form of potato starch, this shake is super filling. 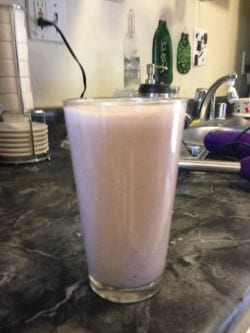 Another way to go with the cottage cheese and blister peanuts…on the leftover green chili & beans. 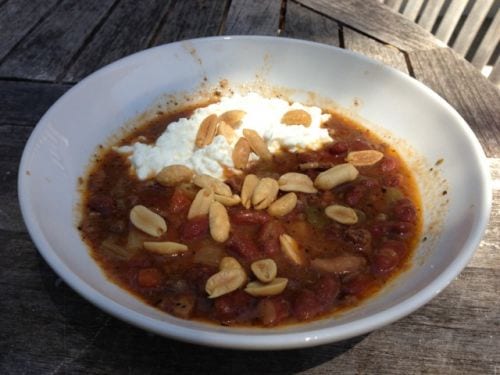 I previously did “fried egg sandwich tacos,” and this is basically the same thing, though with my ever present taco meat. 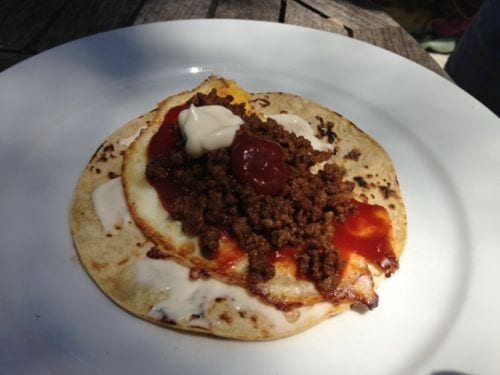 I’m finding this taco meat to be a great thing to have in the frige at all times. One word of advice is that once the fat has settled & hardened in the fridge, I like to break it all up and mix it around so that when I take a spoonful or two to heat up for something that the fat is well proportioned.

I’m finding that a 20-second nuking is ideal for whatever serving I’m going to be having.

OK, pics from a proud paleo steak BBQ I did for 6 people last night, including a sauce reduction.