A few weeks back there was a sprinkler problem. It was all about vegan vegetation, in jeopardy of browning.

The low-IQ, dumb, browned-skinned Mexican gardeners come every Thursday to tend to my vegan bounty. But they aren’t vegans. And while they may certainly be undocumented—PC speak for illegal—I’m at a loss to understand why me or my browning lawn should care about that. I told the Chief Illegal, “It’s probably a broken wire, since the sprinkler station can be activated manually, and all other stations work fine when activated manually from the timer.”

That dumb, brown-skinned wetback Mexican somehow knew. He nodded; went to his truck for a Power Meter—likely assembled from discarded San Diego tires and bubble gum from under the tables in Tijuana bars—to measure for resistance in ohms, or absence thereof (I’m sure every white person on earth knows all about that, given their relative high IQs—so I won’t take the time to explain it; IQ is everything). Upon his confirming my suspicions…by means of chicken bones tossed into a bowl and dancing around naked in my backyard (embarrassing), he got dressed, went back to the truck for wire, a ladder, tools and supplies—like “twist caps” (I’m sure you all know what I mean, to a man & white high-IQ woman). He had it fixed in a jiffy.

He also reprogrammed the digital controller (divine guidance…since his dark skin color has surely caused him to be incapable of such things as rudimentary ROM programming—and I’m sure all you whities know all about ROM programing, so I won’t explicate).

He changed the sprinkler start timing, from 1am, to 7am—without telling me. I’m sure 7am has some cosmic, mystic significance, but Google has been balls in terms of figuring it out! …Probably some ignorant superstition not even documented enough to be picked up by our new White God Google. If so, I’m sure it has roots in the totally idiotic cosmological fantasies of the Inca and Aztec civilizations. We can surely rest assured it’s not rooted in the valid cosmology represented by white, European Catholicism—colonial cultivators of language and culture worldwide—or Christianity in general…or anything you might have seen in late night infomercials.

I was just about to change the sprinkler timing back to 1am, when I noticed something. 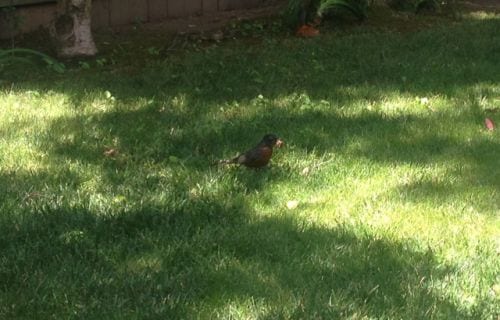 Early Bird with the Worm(s)

That pic’s highly cropped, because our daily deal—Me and, Mrs. J…uh, Robin—is that I don’t get too close to her. She keeps catching the dozen or so earthworms I see her catch every single morning from about 10am to noon—with astounding jab-to-ground precision, eating them to later regurgitate them for cat food, I assume. After that, I presume she’s off hunkered down for the hottest part of the day before she comes back for some late afternoon and evening gathering. After all, she does have a bird brain the size of a filbert nut.

Oh, shit! I just realized that Ive gotten highly digressive over many paragraphs and even a pic! This post is about birds & vegans, and I’ve only just got started. It was certainly not to be about dumbass Mexican illegals, or any dumb people suffering the dumb disease of dark skin!

But oh, wait. Isn’t it really about normal birds who happen to be smarter than vegans? …Isn’t it just that the dumbass brown-skinned Mexicans got my sprinkler system working and modified, mystically bringing forth this whole mystical scenario—like perhaps a shit smear that looks of an immaculate conception apparition, of an unmarried little Jewess mixen who got feisty—then self conscious, masterminding Planet Earth’s biggest coverup of all time in her Jewish shame?

In truth, I have zero idea whether any of these quirky references or totally fucked up juxtapositions resonate with anyone. It’s merely that thinking of totally off the wall shit makes me laugh, and when I think of that which makes me laugh, I get motivated to write it down. And guess what? I have an App for that!

Welcome to my app.

…I do wonder, on a slightly more serious tack: Doesn’t Mrs. Robin know that she’s the one animal on earth perfectly adapted to heartheathywholegrains & seeds? I’ve no doubt she knows this, given birds have to eat upwards of body weight in food every day. Then, give ‘er a nest of wiggling, chirping cat food to raise, and you end up upping the ante in daily requirements. I’m sure vegans know all about all this, incidentally. Most are white….High IQs… That so many have come up on charges worldwide for their inability to properly nourish just one single human offspring, things are certainly looking up for the prominence of birds who manage an entire nest…so long as the cats don’t come and cuddle up, in between eating their salads.

OK, ok, let’s just suppose that birds are vegan at heart. Really. They just really want to scratch around for grains & seeds. They loath themselves when they just can’t help themselves…and sneak into my backyard in the early hours over temptation…desires of the bird-flesh, engineered by dumb and evil illegal Mexicans changing sprinkler watering timer shit.

…It’s as scandalous as a B-12 deficient vegan sneaking a couple of raw oysters per week, then telling everyone else who feels like shit that they just aren’t doing it right.

A little secret. …A bird told me: They’re worried about B12, too. That’s why they eat worms. “No CNS,” she chirped…wait! She tweeted that.

I’ve always been a bit reluctant to use that quote, that I first read 20 years ago…even though my blogging is all about animal nature, especially including humans. I’ve found the quote to be always used by statists (fans of Rand) who think their form of statism is exemplary, while others sink below their pro- and prescriptions of how they want everyone else to conduct their lives. It’s always, however, merely another form of statism. Rand made me an anti-statist within weeks of reading her in spite of her own ignorance and intellectual dishonesty in the matter, which I recognized quickly.

Why else might I shy away from employing that quote? Because of Francis Bacon, whom Aynstein actually quoted in this, quite a few times:

Nature, to be commanded, must be obeyed — Francis Bacon

I’ll only ever quote them together.

Aynstein never got fully integrated, but I’ve always given her a pass for that. She hated libertarians and anarchists, but basically made me one in spite of herself, and it happend very quickly. I simply looked to the logic, principles and completely honest integration of her writings. Her personality and celebrity was but a mere curiosity. I wonder if she’d have wished to be worshiped and revered unquestioningly as she is by so many, today.

I’d love to do as well over the next decades of writing but won’t. The world won’t change enough in my lifetime. You still have to court intellectuals, and all I want to do is speak to plain smart people.

…Like people who fix your sprinklers and bring birds, to illustrate that vegans can’t even muster the essential animal intelligence of a tiny animal with a brain the size of a filbert nut.

And you get to write a whole entire blog post about just that.