I figure that with all my postings on things like some beans, corn tortillas and supplemental resistant starch, that a Hello to Paleo or Still Engaged to Paleo food post might be in order. The point is that nobody really needs to make big, grandiose statements about any of this. They can relax and do their own versions of 80/20, 70/30, or 90/10 as they like. What I’m trying to popularize a bit is that for the other 20%, consider things like beans, rice, corn tortillas and such—rather than a trip to the burger or pizza joint, a pint of ice cream, or a pound of bacon.

Last Friday evening Bea suggested steaks on the barbie and have some folks over. It was already about 4pm but we put it together, dinner for 6. On the menu: grilled ribeye steaks; onion & jalapeño, red wine and beef stock reduction sauce; green, green, green salad with a dijon mustard vinagrete, and deli sourced creole potato salad. Dessert was some vanilla ice cream with fresh blueberries and peaches.

Let’s start with the salad, one of my favorites inspired by a local BBQ joint, The Hik’ry Pit. It’s green leaf lettuce, green onions and green bell pepper. Tastes great with a blue cheese dressing, but also with my standard dijon vinaigrette. 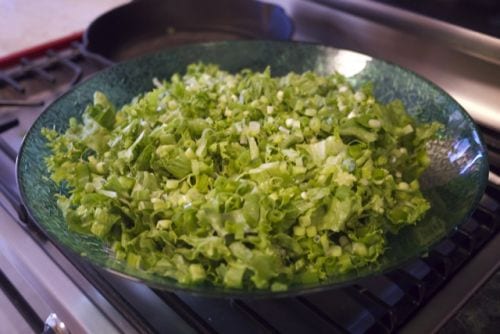 Simply put as much EVOO (I prefer Greek olive oil) in a bowl as you’ll need, eyeball in your doppops of dijon mustard (I prefer Maille), whisk with a fork until all the mustard is broken into globs throughout. Then introduce vinegar little by little, whisking between each drizzle until you establish an emulsion. Try not to overdo the vinegar. Good idea is to taste, even if not yet emulsified and when you get the right balance, just keep whisking until you get it emulsified and it doesn’t separate. 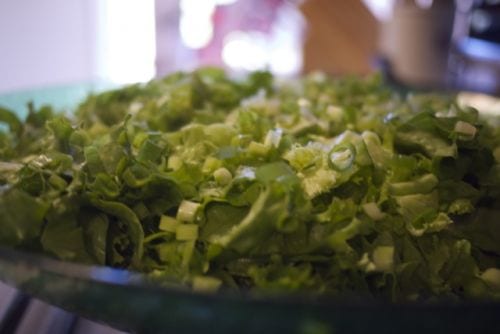 Try this at home!

I unfortunately didn’t take any pics of the sauce process, but there’s lots of past posts. The classic way is to saute onion or shallot, and mushrooms in butter, deglaze with red wine, add beef stock, reduce and strain.

In this case I had no mushrooms, but saw I had a large jalapeño left over from my green chili & beans preparation, so I thought half of that, without the seeds might give a nice bit of spice to go with the grill flavor, as well as the spiciness of the creole tater salad.

It worked well—salt & pepper to taste when it’s all done, of course.

OK, let’s BBQ some steaks. Grill on full, slap ’em on, a little salt, pepper & garlic powder seasoning, close the lid for about 5 for the smoking process (I don’t clean my grill often for this reason—I want lots of smoke). That’s 4, 1-lb steaks for 6 people. 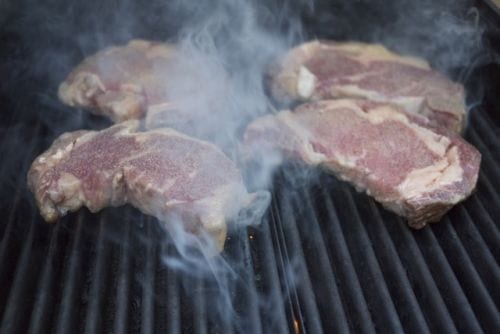 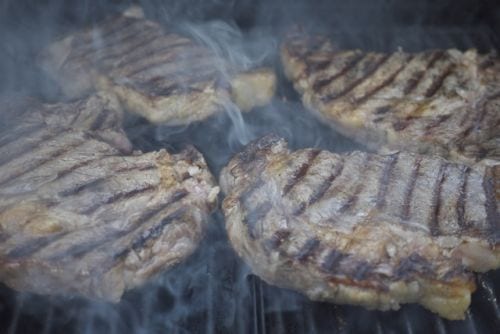 Perfect at the turning

After about another 2 minutes with lid they were done, and I finished off the last bit of the sauce while waiting for a 10-minute rest (the small amount of juice released during the resting period got introduced into the sauce—one reason I only season lightly until this is done, then I do a final tasting for salt & pepper) 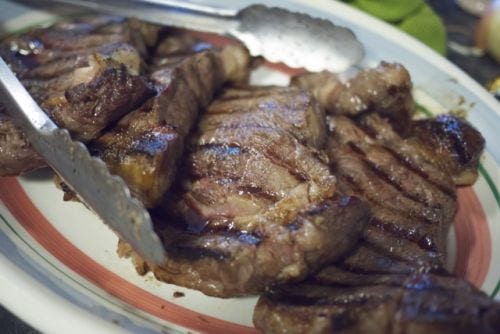 For serving, we sliced up, put back on the same serving platter, drizzled with a small amount of the sauce and served the rest in a bowl for sauce supplementation. 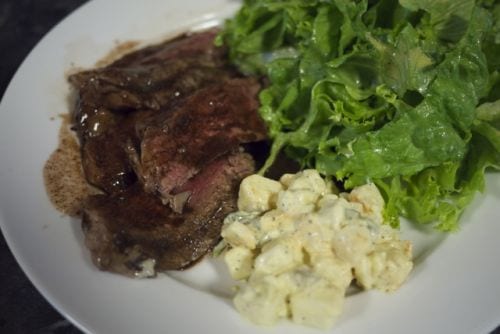 My second plate was only meat & sauce (note the very small portion of potato salad—the sane way to do things if you plan on a meat chow-down). Probably largest meat meal I’ve had in a long time, perhaps 3/4 pound in total. Even though I was up until 2am, I felt great the next morning. A hefty meat meal seems to do that, also counteracting negative effects of alcohol consumption.

Finally, what would round out a decent paleo BBQ? A fire, of course. 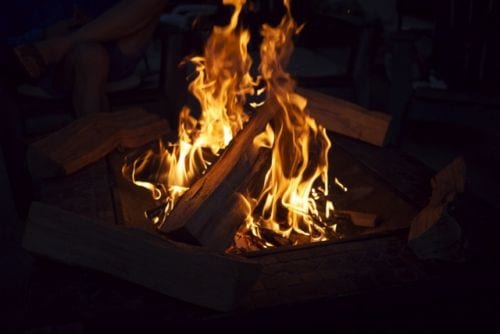 …I’m about getting fed up with all this global warming and the complexity of it. It would be nice to have global warming, such that it’s actually warmer and you could go “see, global warming…it’s it nice?” But of course, we all know that’s silly, facile. Global warming is only about increasing average global temperatures, see, and I don’t even know where that place called Average, Earth is even located which makes it kinda frustrating.

All this talk about warming, warming…and you get a cold June in San Jose that usually finds it difficult to must 70F by early afternoon. Yea, I know: it’s complicated.