Vitamin D and Dark Skin: Are You a Fish Out of Water?

Back when I included the “Are You a Fish Out of Water” section in my book, it was based on the idea that because darker skin is an evolutionary adaptation to protect from overexposure (and an attractive one at that 🙂 that the logical corollary would be that darker skinned folk living at latitudes far from the equator (Manilla is at just 14 deg N, Seattle is at 48 deg N) would typically be deficient even with significant sun exposure (4 reasons: the angle of the rays, the smaller window of absorption daily, smaller seasonal opportunity, and a general absence of sunny days year round in comparison to tropical regions).

Unfortunately, when I looked for research I found lots on the general deficiency of darker skin folk (and all the associated maladies, from osteoporosis to higher all-cancer risk), but nothing that contemplated the specific cause I was aiming at: WHERE YOU LIVE. That has now changed and confirms my suspicions. Just published in The American Journal of Clinical Nutrition:

Objective: We examined the efficacy of a dose range of simulated summer sunlight exposures in raising vitamin D status in UK adults of South Asian ethnicity.

It’s pretty short, just the abstract, but someone at The Vitamin D Council went through the full text and here’s the brief synopsis in plain English.

In an effort to estimate just how much vitamin D dark-skinned individuals can make during exposure to sunlight, UK researchers exposed a group of people of South Asian ethnicity to several different doses of UV radiation[.]

This same research group had previously determined that laboratory exposure to UV irradiation equivalent to casual summer sun exposure produced 25(OH)D levels greater than 20 ng/mL in almost all white adult participants, but failed to do so in any of the adults of South Asian ethnicity. This study was designed to determine how much more UV exposure those of South Asian ancestry would need to achieve vitamin D blood levels similar to those seen in people with lighter skin types.

Researchers recruited 60 adults of Indian, Pakistani, and Bangladeshi ethnicity with skin type V. People with skin type V have a fairly dark skin tone from increased melanin production. This extra melanin protects them from UV radiation, reducing their likelihood of developing non-melanoma skin cancers, but means they must spend much more time in the sun than those with lighter skin to produce the same amount of vitamin D.

The participants were divided into six groups and exposed to UV radiation three times per week for six weeks. The UV lights were designed to mimic the summer sun with 95% of the light as UVA radiation and the remaining 5% as UVB. The groups were divided by the amount of radiation they received, measured in standard erythema doses (SED):

These doses were equivalent to anywhere from 15-90 minutes of peak summer sun exposure in Manchester, United Kingdom (53.5˚ N), the larger the number, the more minutes in equivalency. The six week study design was chosen to represent the length of school summer vacation, the time period where most people in the UK receive the majority of their vitamin D-producing UVB radiation. Participants were dressed in T-shirts and knee-length shorts during UV exposure to simulate casual, summer clothing. The study was conducted during the winter months to avoid confounding with any UVB exposure from the sun.

The authors noted that in this follow-up study, even with a three-fold increase in UV exposure, those of South Asian ethnicity are not able to make sufficient vitamin D at northern latitudes wearing casual clothing. Those receiving the larger doses of UV radiation were left with an average vitamin D blood level of only 15 ng/mL.

From an evolutionary perspective, those with skin type V evolved this darker skin as protection from the intense UV exposure they received in the tropics. While this increased melanin production was protective for South Asians living in South Asia, it makes it very difficult to produce adequate vitamin D in the sunlight of northern latitudes. Based on the studies by these authors it will be difficult, if not impossible, for those with darker skin to achieve a natural vitamin D level from sun exposure alone, particularly if they do not commit to getting full-body sun exposure.

It is therefore imperative that those with the darker skin types living in areas of the world far from where their skin types evolved supplement with oral vitamin D year round to avoid the startling deficiency states observed in this study. If they want to make their own vitamin D, they likely have to expose more skin and get even longer periods of sun exposure.

I’ve been supplementing with 4,000 – 8,000 IU per day of D for years now and spend lots of time shirtless in the summer. I almost never get sick, hardly get colds, and energy levels are usually off the charts. It’s kinda like that feeling of euphoria you get after a day at the beach—but year round for me. That’s D doing its thing (same is reported by many, many “paleo” fans). Most recently I’ve been going to the swim club almost every afternoon for 30 minutes of lightly treading water in the deep end, followed by 10-20 minutes of air drying by walking laps around the large pool. The only downside is that I feel so good all the time I seem to have less interest in being on the Internet, including blogging.

I try to keep my levels between 60-80 ng/mL year round and here’s why, the association with most forms of cancer, excerpts from that 2008 post: 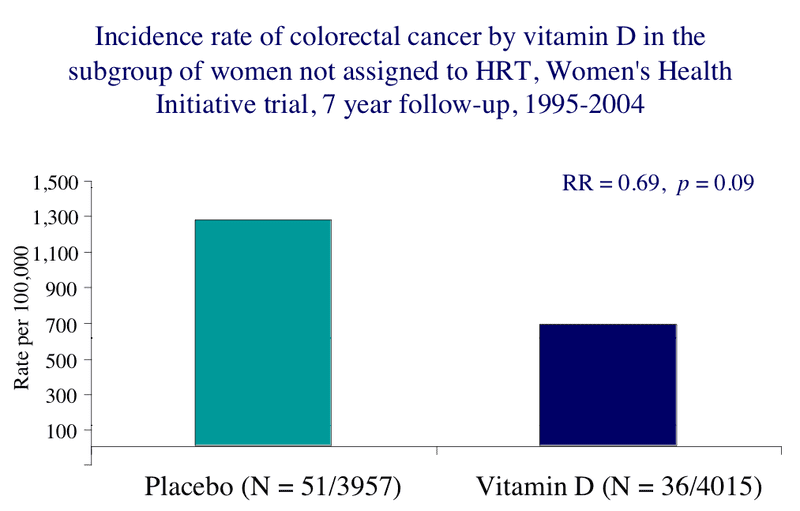 Babes: protect those awesome boobies, wouldja — not to mention you very lives? Get your vitamin D levels above 30. 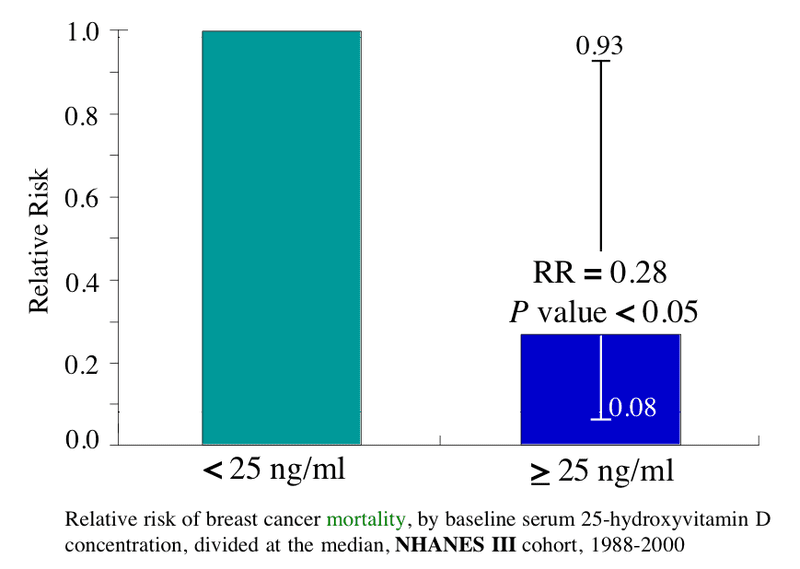 Smile. You’ve been duped by the “experts” and “authorities.” But at least they’ve got their grants from the drug companies. I’m sure that’ll work out for you in the end. 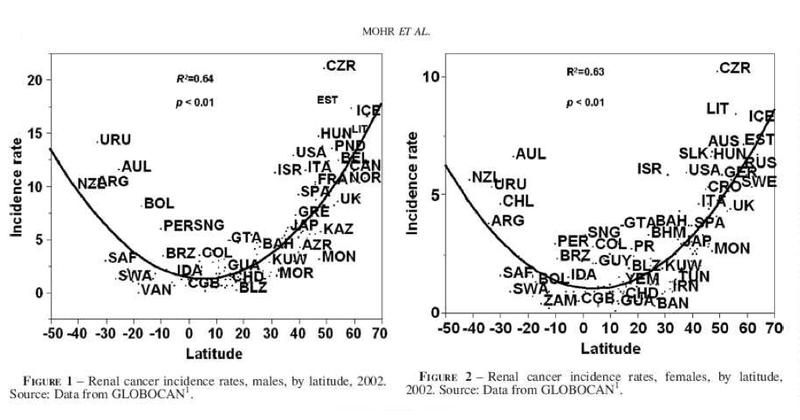 Here’s one of a great many of similar slides on various cancers illustrating the same thing. Get your level up to 30 and you reduce your risk by half. Get it up to 60-70 and you virtually eliminate your risk. 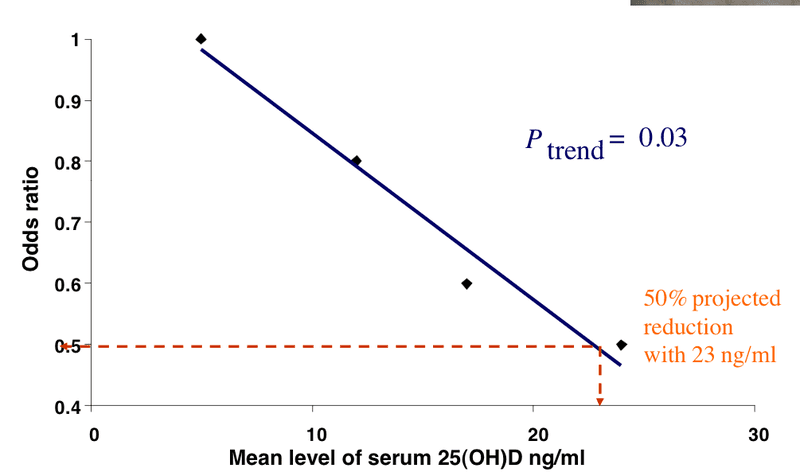 And here’s the mother load. Above 50, and your associative risk of cancer drops to 25%. For women, the real outlier is breast cancer. Get it above 60-70, sweethearts, and good luck. A high amount of fat in your diet isn’t going to hurt, either. 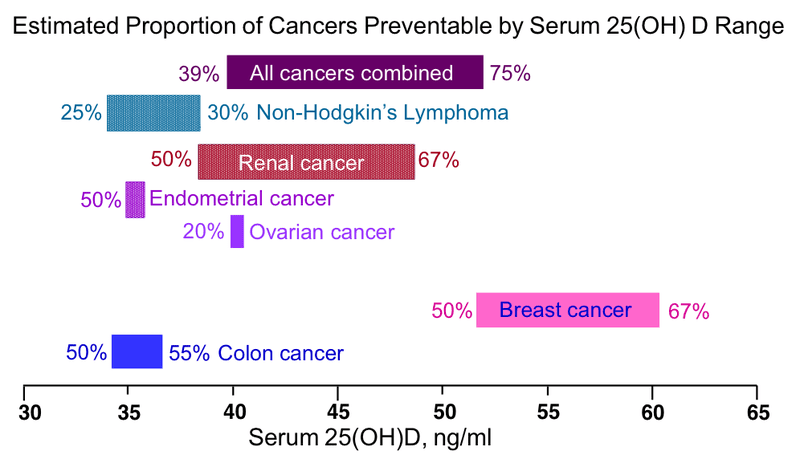 In the end, we’re just plants, you see. Thing about plants is, we seem to understand that depending on where they evolved on the earth, they thrive best under certain environmental conditions from tropics to arctics and everywhere in-between.

Simple. Pimple. But, see, “humans are different.” God created us, or something stupid like that, and the Bible never said anything about latitude. It also said to eat your daily bread. Dumbest book ever, designed for ignorant people, to motivate and encourage them to be as stupid as they can be. On that score, marvelous success.