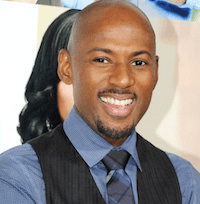 Romany Malco, who reprises his role as Zeke in the recently wrapped “Think Like a Man, Too,” weighed into the Trayvon Martin topic from a different angle.

In a blog on The Huffington Post, the actor pointed out the role of mainstream news, pop culture and economics in this story steamrolling over more prevalent black on black shooting crimes that are largely uncovered by the press.

So rather than facilitate more racism outcry, I’d like to address young black people specifically.

I believe we lost that trial for Trayvon long before he was killed. Trayvon was doomed the moment ignorance became synonymous with young black America. We lost that case by using media outlets (music, movies, social media, etc.) as vehicles to perpetuate the same negative images and social issues that destroyed the black community in the first place. When we went on record glorifying violent crime and when we voted for a president we never thought to hold accountable. When we signed on to do reality shows that fed into the media’s stereotypes of black men, we ingrained an image of Trayvon Martin so overwhelming that who he actually may have been didn’t matter anymore.

Don’t you find it peculiar that the same media outlets who have worked so diligently to galvanize the negative stigmas of black men in America are now airing open debates on improving the image of black males in American media? Do you honestly think CNN is using their competitive time slots for philanthropy?


“You never want a serious crisis to go to waste.” – Rahm Emanuel

If we really wanted to ensure Trayvon Martin’s killing was not in vain, we’d stop perpetuating negative images that are now synonymous with black men in America. We’d stop rapping about selling drugs and killing niggas. The next time we saw a man beating a woman, we’d call for help or break it up, but one thing we would not do is stand by with our cellphones out — yelling WORLDSTAR! Instead of rewarding kids for memorization, we’d reward them for independent and critical thinking.

We’d spend less time subconsciously repeating lyrics about death and murder and more time understanding why we are so willing to twerk to songs that bemean women and boast of having things we cannot afford. We’d set examples of self-love for our youth by honoring our own hair, skin and eye color. We’d stop spending money on designer gear that we should be spending on our physical and psychological health. We’d seek information outside the corporate owned-media that manipulates us. We’d stop letting television babysit our kids and we’d quit regurgitating pundits we haven’t come up with on our own.

Education, introspection, self-love and excellence are the only ways to overcome the wrath of ignorance. So before going back to popping molly and getting Turnt Up, I urge you to consider the implications of your actions. Your child’s life may depend on it.

I could have written that; but also could not have, if you know what I mean. That’s why I quoted it almost entirely. I’m deeply envious of Mr. Malco for having gotten it so right, so wide, so integrated with the particular Animal condition he’s most familiar with. Salute, sir.

I’ve written for years that the only hope against the onslaught against men, by really stinky, womenized, institutionalized interests is…men loving-women (thank you, Judgy Bitch & many others…kisses). You can guess who the salvation of the profit driven, institutionalization of blacks for fame and profit by intellectuals and media—many of them nomenclatura blacks, as in black-on-black slavery and murder—falls to.

Thank you again, Mr. Romany Malco. I never heard your name before today and yet, I know exactly who you are. That’s the power of principles.