Got these off the counter of a local convenience store the other day. 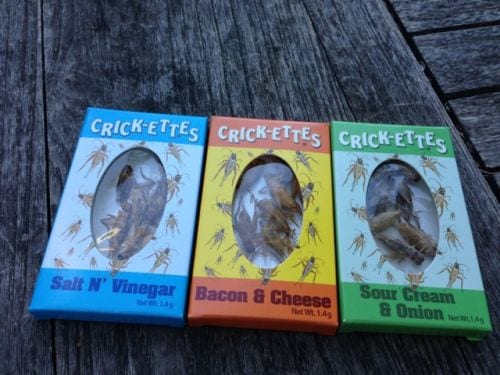 I had not the slightest trepidation in trying them out. They were tasty, with a nice texture too. On travel around the world I’ve eaten all sorts of unconventional stuff (by Western standards). I recall big, deep fried locusts (grasshoppers) in Thailand. Salted, they were basically like Lays Potato Chips and you can’t eat just one. I also had some sort of big-ass fresh water beetle where, when you peel off the shell on the back, texture of the meaty meat underneath was basically like shrimp.

When you think about it, eating bugs in palatable ways totally oblitterates and leap frogs the whole vegan handringing bullshit about “sustainability”—which is of course bullshit on its face anyway (see Allan Savory). But why argue with idiots and morons? Just tell them that the combined biomass of ants, termites and krill dwarfs the combined biomass of all mammals combined. And how expensive—and what sort of footprint would be required— to farm & harvest them for food in all sorts of concoctions?

Here’s the macro-nutrition info for the crickets, from the label:

As you can immediately see if you’re paying attention, the macros add up to 1.7 grams, but the package portion is 1.4 (oh, well; so much for labeling accuracy). Anyway, though, you see this is high fat, very low carb and moderate to high protein (60/30/10…ish…F/P/C). Nothing listed as to vitamins, minerals or phyto-nutrients and my emails out to birds, reptiles and fish have gone unanswered.

Of course, with the flavorings, there’s plenty of crap in these boxes per the ingredient label— but there certainly doesn’t have to be. Imagine a true paleo version that’s flash roasted, sprinkled with some dried spices, and packaged. There’s an idea for some of you paleo snack food entrepreneurs out there. Or, a variety of bugs could be farmed, harvested, and used in other preparations. The possibilities are pretty endless. And so is the supply.