How We Almost Killed Our Dog in League With Veterinarians 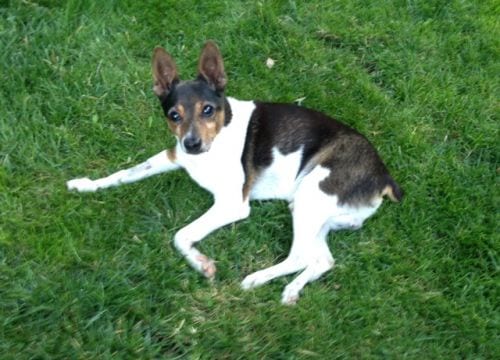 For the TL;DR crowd, the story is that several days prior, our 14 1/2 yr-old Rat Terrier, Rotor, was found laying on the floor at 1:30am, unable to get up and limp as a wet noodle. Could not even raise his head that was drooped over my arm. Took him to the 24/7 hospital thinking this was the day. They kept him a couple of days and diagnosed it as “Old Dog Vestibular.”

But, I was bright eyed and irrationally exuberant when I wrote that post. Shame on me, though I forgive myself for it. I love the little guy and it’s easy to do when you’ve walked the equivalent of 4 times across the USA with this one. I know his every move and manner. And he knows mine. But, I considered taking the post down. It was painful to see and think about in the ensuing days, because nothing was going as I’d expected. 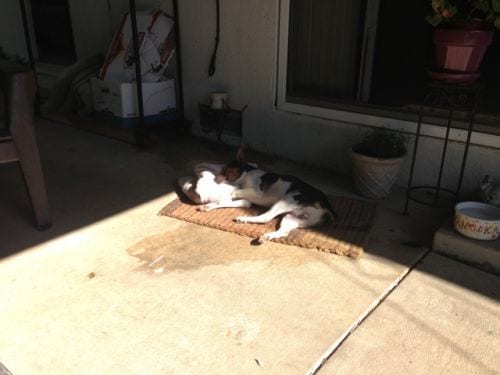 As the days passed and passed, we knew it was not some simple matter of “dog vertigo” and he’ll be better in just a few days. Beatrice spent hours Googling and watching YouTube videos. “I think it’s a stroke,” she eventually said. He still could do nothing but hold his head up, and scoot just a bit, with two legs on his left side that had become functional.

We were a solid week into the ordeal, and Bea had to be away for an evening for a teacher conference in Napa. “I’ll handle it,” when she offered to cancel. We knew it was likely his last few days and my friend, Robert—who walked with us hundreds of times in our six years in the lofts—came over for the evening and we got drunk, smoked marijuana, and spoke of good times with our mutual friend. 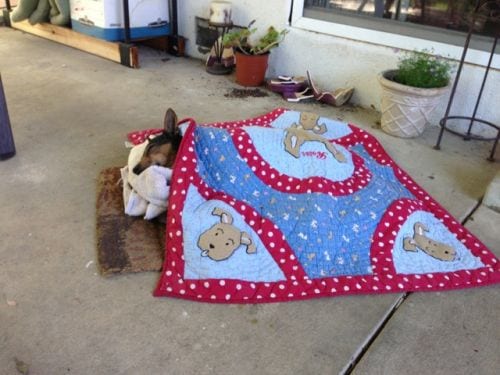 Before Robert headed over, I decided to light a fire in the pit we have on the patio.

I didn’t realize when I lit it that Rotor does not like fire even a little, but can’t move now. He wants to always be a comfortable distance. But he could only scoot a little. Had Beatrice been here, what was to happen would never have happened. She’s the babier, I’m the asshole; yin-yang. Long story short, Rotor immediately scooted to the steps that go into the house via the sliding glass door. …And then I sat and calmly watched him torture himself and struggle with everything he had over a solid hour to eventually work himself over two steps and into the house to a safe distance of about 2-3 feet into the house…all the while, with visions of physical therapist-torturers doing what they do with stroke victims.

But in a sense, it was too little, too late; and it wasn’t like there was huge improvements to quickly follow. That was just a thing. Bea and I were both coming to the realization that this is not a human, we have lives too, and it’s eventually somewhat weird to not be able to make all the distinctions and decisions appropriate to people without unlimited time and resources. And plus, this was no life for him. On the other hand, there was no big rush. 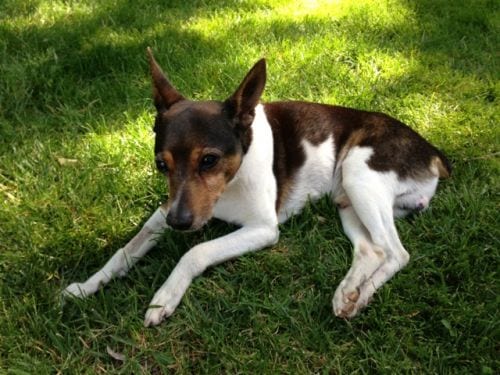 The right front is compromised from a break as a baby, the right hind non-functional now

She decided to take him to two vets back-to-back two days later, about 10 days from the original event. The first was his vet over 6 years when we lived downtown. He asked, “He hasn’t walked in 10 days?”

“Why doesn’t he smell? They always smell.”

The backstory to that is that’s when Rotor did his scotting. He hates pee, or worse, on him; and he scoots away, or to position himself for least damage. Nonetheless, he got sprayed off and wiped down numerous times per day.

The vet recommended putting him down. He was ready to go get “the cocktail” immediately.

And Bea was off to the other vet, the one over the last three years. Same recommendation. But she offered to come over to our house to do it in the backyard on the grass, under the tree.

…I do not begrudge or even criticize these veterinarians their opinions. They deal with the reality of end of life and coping—or failure to cope—every day. It is merely a matter of time for one, and two, I believe they also fill that role of trying to help people face reality and let go. I get it. …In fact, I get it so much that when Bea brought Rotor home and gave me the news, I felt it was time to play the yang to her yin, and advised her that it was over. It’s time—for me to play strong.

…Instead, we decided to have a party! Suspecting it was a stroke, she had scheduled an appointment with one of only a couple of veterinary neurologists in the Bay Area, for the following Wednesday. It was Friday. Like I said, no rush.

She got on the phone to get people, and I went to the store and we did ribeyes and other stuff, and Rotor got plenty of scraps and maybe some ice cream, which he loves. Of note: other than the very first night of the incident, Rotor’s appetite was as strong as ever. It was a great evening: Rotor had a lot of people around him and very unlike our female, Rotor loves people, loves to be around them, loves to be in the center of all activity (it’s a good food acquisition strategy). 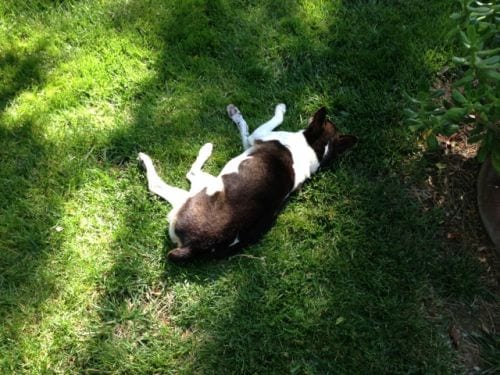 Wednesday, we went to see Dr. Filippo Adamo, DVM, DECVM. This is him, a local news report about his pioneering disc replacements in dogs for $500 (2.5 min).

And if you think that’s a steal, his consultation for a solid hour and much examination and testing, even outside on the grass with Rotor: $130. Then he spent a half hour writing his summaries of examination, conclusions and instructions. He advised against all expensive procedures and tests. Instead: “just wait.” He went on to tell us his best guess, without imaging, was a stroke in the brain or right side of the spine; or, a tumor. In the case of a stroke, 95% of dogs recover fully. If he stops improving and gets worse, probably a tumor. Wait and see.

And so we did. Can you spare 50 seconds?

I think that the meta message—for me and Beatrice, anyway—is that you really can’t trust anyone who doesn’t live and love your own values. It’s not their fault, really. We just expect too much of people in advisory or professional capacities and are often too ready and willing to substitute their mind and judgment for ours…or our lack of same, or laziness, or painfulness in getting to it.

It’s completely silly to love our dogs the way we do. But that’s easy. I really don’t give much of a fuck what anyone thinks anyway.