Yesterday we saw that beans are low GI and why (resistant starch), and how they even have a “second meal effect” into the following day where BG spikes are significantly blunted in subsequent, non-bean, high GI meals. Potatoes are high GI, typically causing significant spikes in blood glucose—not the best choice for diabetics. But is there a way to prepare, say, mashed potatoes in a way that would not only make them significantly lower GI, but creating a second meal effect as well?

OK, so per Tatertot Tim, here’s a list of the resistant starch content of various foods (he hasn’t thoroughly verified some of these but believes it to be largely accurate).

The Resistant Starch content of food changes. It’s different when raw compared to cooked, and different when cooked in various ways, and different when cooked and cooled. There’s no official way to measure RS. The gold standard is the ‘ileostomy method’ also called ‘in vivo’. They feed a person or animal a food, then examine the contents of the small intestine just before it dumps into the large intestine—any starch found is RS. The second method ‘in vitro’ or test tube method, treats food with acids that act like digestion and then they measure remaining starch. Both methods get similar results.

…So way back when, I had the idea to make “mashed potatoes” but to preserve all the RS, which would be a huge amount; e.g., a 1 pound raw tater contains over 100g RS. My efforts were not successful, even doing them sous vide for 24 hours. I can’t find it in my folder but Tim had a different idea, which was to cube and cook them in water at less than 140F, then drain and season. He liked them and sent along his BG readings which didn’t budge, lending evidence to the idea that the RS content completely blunts the glucose spike—to absolutely ZERO in this case.

A couple of weeks ago we came up with exactly the same idea concurrently, same day. Here’s the idea:

I did mashed potatoes like this just last night, but I didn’t measure anything because I had confounders all over the place: 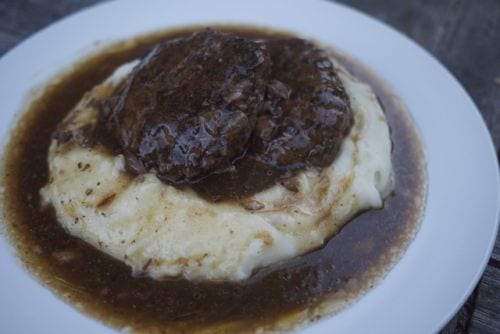 Here’s the post from the first time I did salisbury steak. It’s adapted from this recipe. No breadcrumbs, and rather than the roux, I simply thickened with…you guessed it…potato starch in a slurry of cold beef stock. 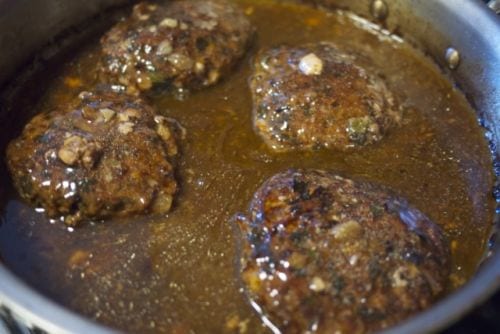 All I know is that usually, when I do eat a big plate of mash I usually end up a bit comatose after a couple of hours. Nothing of the sort, and also: zero fartage.

Alright, that should give some of you N=1ers something to do. So go do it and report back. Please make sure to report how much potato starch you decided to use per potato. Ideal would be to report the weight of the potato as well.