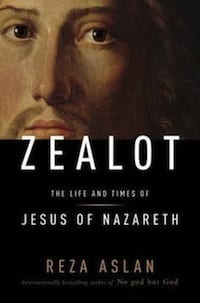 One of my
favorite programs to catch in the car is Fresh Air on NPR, with Terry Gross. Sure, I doubt we’d see
eye to eye on much of anything socio-political, but I can easily
set that aside to appreciate someone’s professionalism and in this,
I think Terry is simply one of the best professional interviewers
ever. She always demonstrates her meticulous preparation and brings
out the best in her guests.

So the other day I
caught part of this interview with author Reza
Aslan: Christ In Context: ‘Zealot’ Explores The Life Of
Jesus. I found it interesting on a whole lot of
levels, not the least of which is some parallels between the
author’s life and mine in terms of being seduced by “The Story of
Jesus” in the fundamentalist, “born-again” sense at a young age and
being rather, well, zealous about it.

In Aslan’s
case, he was a Muslim immigrant from Iran. You’ll also learn in the
interview that he induced his mother to convert to Christianity, a
faith she retains to this day.

Writer and scholar Reza Aslan was 15 years old when he
found Jesus. His secular Muslim family had fled to the U.S. from
Iran, and Aslan’s conversion was, in a sense, an adolescent’s
attempt to fit into American life and culture. “My parents were
certainly surprised,” Aslan tells Fresh Air’s
Terry Gross.

As Aslan got older, he began his
studies in the history of Christianity, and he started to lose
faith. He came to the realization that Jesus of Nazareth was quite
different from the Messiah he’d been introduced to at church. “I
became very angry,” he says. “I became resentful. I turned away
from Christianity. I began to really reject the concept of
Christ.”

But Aslan continued his Christian
scholarship, and he found that he was increasingly interested in
Jesus as a historical figure. The result is his new book, Zealot:
The Life and Times of Jesus of
Nazareth — a historical
look at Jesus in the context of his time and Jewish religion, and
against the backdrop of the Roman Empire.

There’s a good bit of interview highlights at the
show page, and here’s the transcript. There’s also an
abbreviated, 9-minute interview by Rachel Martin: ‘Zealot’ Tells The Story Of Jesus The Man, Not
The Messiah (and transcript). A final quote from the
highlights.

“[The Apostles]
were farmers and fisherman. These were illiterates; they could
neither read nor write, so they couldn’t really espouse
Christology, high-minded theology about who Jesus was. They
certainly couldn’t write anything down. Instead the task of
spreading the Gospel message outside of Jerusalem, of really
creating what we now know as Christianity, fell to a group of
urbanized, Hellenized, educated Jews in the Diaspora; [and] for
[the Romans], having grown up immersed in this Hellenized,
Romanized world, the concept of a God-man was something quite
familiar. Caesar Augustus was a God-man. What we really see in
these 20 years after Jesus’ death is this process whereby this
Jewish religion based on a Jewish revolutionary becomes transformed
into a Roman religion, where Jesus is transformed from a Jewish
conception of a Messiah to a kind of Roman demigod.”

Alright, there you have it
… Zealot:
The Life and Times of Jesus of
Nazareth. Here’s a book excerpt as well. I just may
have to check out the book. I enjoyed the interview and his
insights into finding what people term as “truth,” as as opposed to
fact. I’ve said it many times that what I find irritating about
religion is not the struggle for morality and meaning, but the
literal interpretation of it, which in 2013 I can only see as anything
but.