One thing I’m generally ambivalent about is plain green salads, with perhaps the exception of plain butter lettuce with my traditional French dijon vinaigrette that I always make myself and love to chow. Three primary ingredients: EVOO, dijon mustard, vinegar (salt & pepper to taste).

But I had cod, and I had big-ass salad stuff with legume starch, so here goes. Adding starchy legumes to your salad brings them to true side dish level.

Step one, the dressing. I’ve blogged this many times but, what you do is eyeball how much you need and that’s your EVOO. Then, about 1 tsp of dijon (plain Maille is the best all-purpose) per 1/3 cup of oil. Then you whip it with a fork and when mixed, add dribbles of vinegar and whip, dribble and whip…until it emulsifies and doesn’t separate. Salt & pepper to taste. 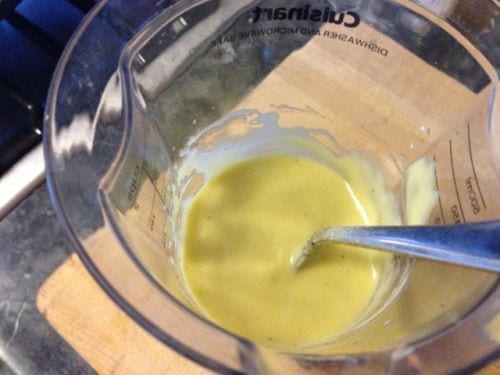 In this case, and first time ever, I used the stick blender. Whoa! Amazing. Winner. I hear cavemen invented them, so it’s paleo. Then you get your salad in the bowl and proceed to prep your fish, because that’s a 5-minute deal. 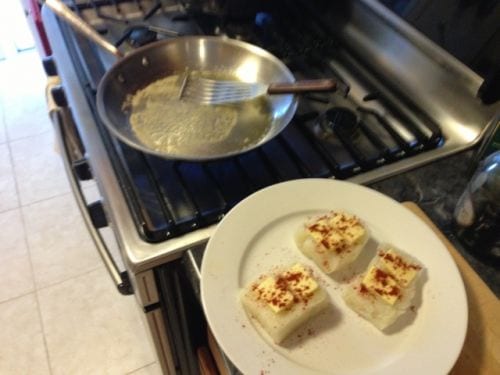 Some sea salt, pepper, thin slices of butter and a couple pinches each of smoked paprika. If you haven’t discovered smoked paprika, you are still a caveman. It’s not your grandmother’s paprika—unless she’s Hungarian, I suppose. Melt a few pats of butter in your pan that you’ll use for the broiler.

Get the butter hot on the stovetop, just getting a bit browned, place the filets in and jiggle around so there’s butter under and they don’t stick. Turn off the heat immediately and place in the second rack under the broiler on high and remove them 4-5 minutes later. 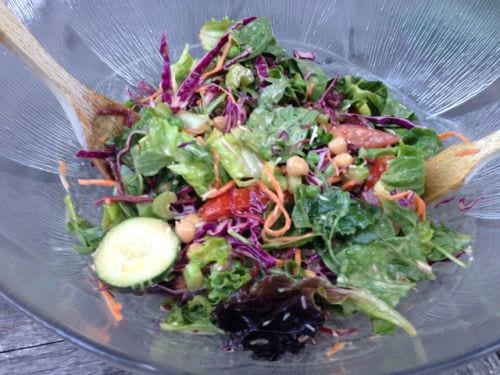 Let your fish rest a bit, then plate. 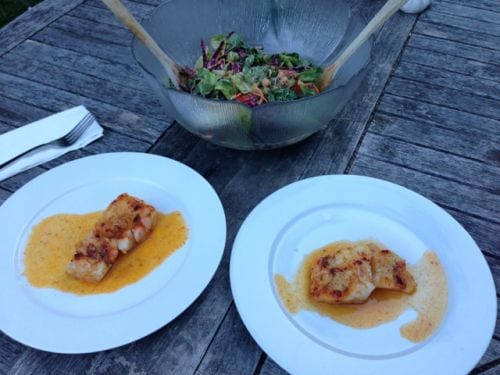 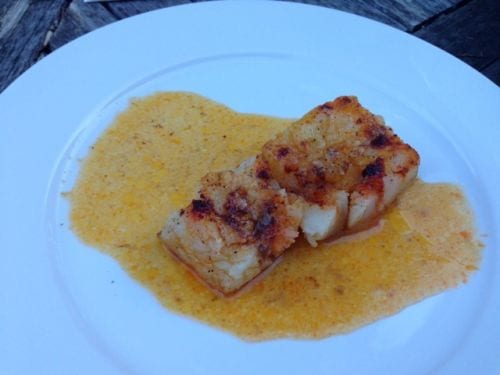 When I have a salad like this, filling and satisfying with legumes I chow down and don’t feel the slightest hunger for the next 12 hours or so (actually, it’s 14 hours since that meal and I’m still not hungry). 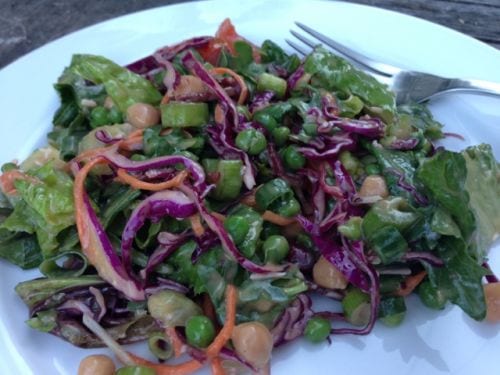 One reason I’ve always adored salad bars in general is that they usually have, 1) garbanzo beans and 2) green peas.

Don’t hurt yourself with those starchy legumes out there. It’s rumored that they’ll kill you with “anti-nutrients.”

Full Disclosure: That salad was actually from the Whole Food’s salad bar; no dressing, because I brought it home and dressed myself. However, today my task is to do a traditional three bean salad, that may end up four or five bean. Gonna soak the beans traditionally, cook, drain, cool, do my own dressing and for the kicker, gonna thicken the dressing with resistant starch, i.e., potato starch.