Contrast: The Heroic Vernon Hershberger vs. Laura and Monte Bledsoe

Indeed, the Bedsoes did turn, but not in a way I would applaud. Here’s the report.

In a widely publicized raid, an inspector from the Southern Nevada Health District (SNHD) interrupted a farm-to-fork dinner at the Bledsoes’ farm on October 21, 2011, and ordered the destruction of hundreds of pounds of food. Shortly after the event, Laura Bledsoe wrote to those attending the dinner, “We have been compelled to truly become active participants in the ongoing battle over our food choices.” The Bledsoes’ payoff for their work on the political level came when Nevada Governor Brian Sandoval signed the farm-to-fork bill into law.

“We have been compelled.” No. You totally caved on the spot—unlike someone else, but I’ll get to him. You were not compelled to put on your Sunday best and dance with your predators. That’s what you did willingly and I’d suspect with a lot of exuberance. The victory, then, is theirs. You’ve got them just where they want you.

The Bledsoes wound up saving the event by having their chef cook up a new batch of food.

Must not have had much confidence in friends, family and customers. Had you defiantly resisted, and then, compelled Oakes (by doing nothing she commanded) to make good on her threat of getting police to escort all guests off the property, destroy all the food herself instead of you doing it for her, you’d have 100 pissed off people instead of just you two.

But kudos for preserving the event, making your cook work overtime and being customer oriented to the point of totally bending over for predators and marauders. [not]

The legislation is probably wonderful for a well-established small farm; especially one that doesn’t want any competition from nasty little tiny farm startups trying to work things out. By gosh, Quail Hollow Farms in Overton have managed to turn predators and marauders into friends and allies! Yays! “Good News!”

Under the exemption a farm holding a farm-to-fork event (i.e., “an event organized on a farm where prepared food is provided for immediate consumption to paying guests”) must register with the “health authority” and may hold no more than two farm-to-fork events in any month. The farm must also provide each guest with a notice stating that “no inspection was conducted by a state or local health department of the farm or the food to be consumed” (farm raising meat and poultry may be inspected under other Nevada law).

What a fuckin’ “victory.” Astounding “good news.” Thanks for fuckin’ nuthin’. Wanna hold farm-to-fork once per week? Fuck you. Check with the Bledsoes. Just wait until they decide they want to do that too…well…I hear they’re in with the Gov. 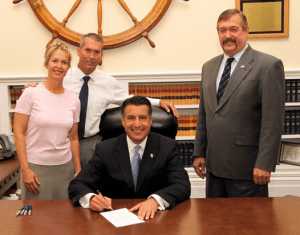 Cozy. Did you rub elbows?

Is that what’s it’s come to? A “victory” is now just an “easier,” well-defined, registered feeding event that you clear with the “authorities” first, and you’re cool? Will you defend a small startup farm that’s too busy tending to crops and animals and his meager P&L to even think that he or she has to register with the authorities to feed friends and customers, at his own place?

…Vernon Hershberger, by contrast, resisted. It’s called Civil Disobedience (See: Henry David Thoreau, Mahatma Gandhi, Martin Luther King). He resisted to the point that the “authorities” destroyed his food themselves. Moreover, the thing about moral civil disobedience is that:

All law ever written is a bastard stepchild to true human moral righteousness, and the only way to illustrate it is via civil disobedience. It is the single form of “revolution” that has proven to change entire vast countries with minimal comparative bloodshed and shooting.

But, I guess getting legislation passed and a photo-op in the Gov’s mansion in Carson City is just too tempting. …I wonder how much it’s changed—the Gov’s office—since I did the field trip over from Reno back in ’70 or so, when the main attraction was some moon grit encased in lucite from Apollo 11…. I digress.

There was a specific reason I called Vernon Hershberger a hero back in June of 2010 and toasted him with raw milk on video. He was being peaceful, morally defiant. Yea, it’s not my favorite outcome, but lawyers probably got the best of him. He fought the charges, instead of pleading guilty and asking to be sentenced to the maximum penalty immediately. And he got mostly off. It was quasi jury nullification. Had the jury been “better informed”—which is euphemism for the explicit disinformation given by the judge in his “instructions” (another telltale word)—he’d have been completely acquitted. The always careful and smart Chris Masterjohn puts it well at the end: Do Americans Have a Right to Eat Healthy Food?

Overall, the trial was a major victory: the jury fully vindicated the private food model. Hershberger’s sole conviction, however, was illogical when paired with the rejection of the other charges levied against him. The state had ordered Hershberger not to move food out of his refrigerators, but as a Christian he considered it a sin to let the food go to waste, so he distributed it between his family and the members of the food club. The holding order was based on the very charges the jury had rejected. After the trial, several jurors expressed regret for convicting Hershberger of violating the holding order. During the trial they were only able to see a version of the order so heavily redacted that they didn’t realize it was based on the very charges they had acquitted him of, and the judge instructed them not to consider the legitimacy of the order. While the prosecution urged the judge to throw Hershberger in jail, several jurors wrote to the judge, pleading with him to give Hershberger a light sentence. The judge read the letters aloud, saying in all his years on the bench he had never received anything like them. Hershberger escaped unscathed with nothing but light fines, though he is now appealing the conviction to remove it from his record. After the trial, several jurors decided to speak on behalf of food rights, join Hershberger’s food club, or begin growing their own food.

These cases show that juries made up of common American citizens simply don’t buy the argument that there is no such thing as private food and no nook or cranny of American soil exempt from state and federal regulators. The right to a jury trial may prove to be one of the movement’s most important assets.

Given the courage Vernon displayed initially, one can only expect so much…and I hate seeing babies in bathwater waste, not to mention good soldiers getting their asses kicked by perfect ones.

Back to the yeah-yeah new legislation, it’s merely a legal victory. There’s not a sniff of morality in what was almost certainly an incestual affair. One final question before I’m done with the Bledsoes: how come whatever legislation that explicitly or implicitly led to this wasn’t simply repealed, or at least curtailed or modified? Why a New Law? Huh?

In closing, here’s simple reality for all you dissapointing maggots:

You do not have a fundamental right to produce and consume foods of your choice.

That ended when The Declaration of Independence (a profoundly moral document) was superseded in principle and authoritarian law by The US Constitution (of zero moral authority); that, in a matter of years since independence, established totalitarian dominion over all of America. …For the purpose of fooling a bunch of ignorant but otherwise free and independent people into submission with a scam that motivated them to believe and pass on: that this was “The Land of the Free.”

Judge Patrick J. Fiedler is to be commended, as I wrote in that post. Judges and lawyers ought always operate meticulously within the bounds of the law, such that you might know how the law really turns, in practice (for what good it’ll do for a bunch of ignorant maggots with zero sense of history, political philosophy, and philosophy of law). And he was explicit in the case:

Thank you very much, Judge Fiedler. You are 100% true and correct, and it must be frustrating to constantly deal with ignoramuses who conflate God & State, rights & privilege, and so on.

You see, sir, they harbor this illusion that they are free or some shit, that this is the land of the free, or some shit. Like belief in Sooper Po3erz in the sky and whatnot, someone told them that, before they even stopped shitting in their pants…and then it was onto a college degree, good job, 2.5 kids, McMansion, 2 SUVs, 2 wave runners, and a timeshare membership.

But they do make damn good cogs in the machine, don’t they?

…Oh, and they’re petrified about the dangers to their kids or themselves….cigarettes, alcohol, marijuana, crack, cocaine, heroin, etc. And now, even those who used some of that stuff are more than happy to have the state stop their kids from doing it.

But they’re too stupid and ignorant and wouldn’t know what a principle was if it got them high. They’ve never understood that cheerleading the power to burn books they don’t like is the very same power that burns the books they do like.

The vast majority are too stupid. The smart ones surely understand it…all the way to the bank and all the prestige because they’re the ones who become professors, top journalists, judges, lawyers, lawmakers and politicians. And man, have they ever created the truly greatest scam in the history of the world, where the people are too doped up on faux “prosperity” to really give a shit. …And just don’t let Extra! go off the air.

Banning marijuana is principally the same as banning raw milk, or farm to fork, or any other intervention, you stupid fucking maggots. As such I really have zero fucking use for you, and even less patience.

I’ll be satisfied when I see you all standing in line to get your daily ration of Soylent. Because everyone should get what they deserve and that’s what you deserve.

It’s sad that America has become such an evil country, but that’s what we’re dealing with, now.

But it’s also what every single voter absolutely deserves.